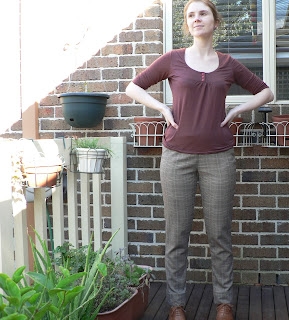 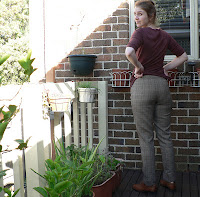 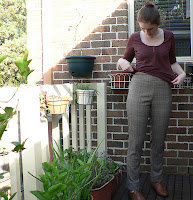 A quick recap on my first Clover trousers - size 8 straight off the pattern were too snug, so I let out the side seams by 3/8 inch each side but made the mistake of trimming the crotch seam too early and when I discovered the horror of front crotch Mumble pants I didn't have enough room to let out the seam. A lesson for newbies trying this pattern - DON'T TRIM THE CROTCH CURVE! Until you're certain at least! I decided version 2 was to be a full size up. A reminder of version 1: 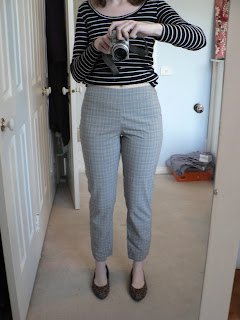 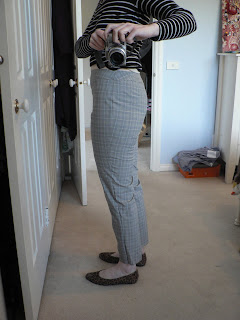 I had been planning to make these pants in some gorgeous Monet-esque floral printed stretch cotton but realised I hadn't enough of it, so my next version is also a checked fabric. Can I suggest when perfecting a new pattern that you DON'T use a pattern that needs to be matched like a check or plaid? Sheeesh. Creating more hassle than its worth!

So version 2.0 - in a 'polyester rich' stretch fabric found at D&J Fabrics in Lygon St, East Brunswick earlier this year when I had an awesome Tour de Fabric Shoppes with my mum. Its a lovely colour combination of beige, chocolate brown, turquoise, pink and maroon but I suspect has a little more stretch than the gaberdine I used in version 1.

A full size up (size 10) ended up being way too big. I guess I thought that because I had added the extra  room at the sides in version 1, and needed extra front crotch space one size up would be pretty spot on. What I didn't think about was the extra body length a full size would provide. I can't quite remember, but I am pretty sure these photos are AFTER I had increased the side seam allowances to 6/8 inch each side, AND taken in the curved crotch seam by at least 2 or 3/8 inch..... 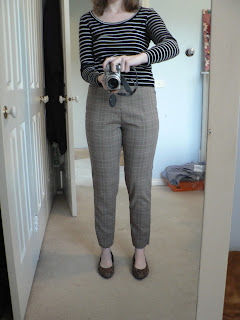 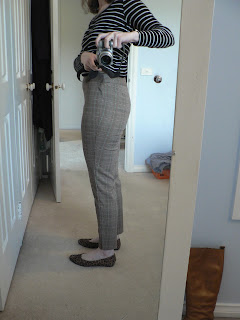 Whats that? Did someone say FRUMP???!!!!
Believe me there were some mega horizontal lines going on there before I took in the crotch curve. But at least they were comfortable - so I needed the look of version 1, with the comfort of version 2!

At least being too big in the crotch gave me something to work with, and I was able to take in the seam enough to at least make them wearable. Here's some comparison pics of the difference in crotch depth vs crotch width with the size 8 and 10 (and by now I've completely lost track of their respective seam allowances - lets just say these are the finished sizes that are most comfortable at the limit of their alteration ability....) 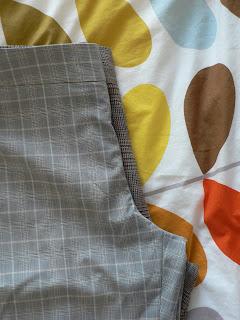 The pants are lined up at the side seams. The larger size is on the bottom, and it's easy to see now the difference in the crotch shape. The larger size has more room in 3 different 'dimensions' I suppose I'd call them - the waist-to-crotch length, the side-seams-to-crotch width, and the crotch depth - that little curve at the bottom that goes under one's nethers.... I don't know if thats what they are technically called but thats they way I think of them with regards to fitting my bod. 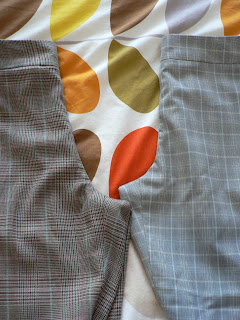 This shows in better detail what I consider to be my problem with the smaller pair (on the right). That little curve on the bottom is a bit too short and too high as a result digs in in a most uncomfortable and unsightly location. What I think I need is the crotch length of the size 8's, with the crotch depth of the size 10's. So this is what I have done with the pattern:

On the back I've done the same - hopefully this sorts me out! I've decided to cut a size 10 waistband and side seams, but kept the size 8 middle and crotch seams. I'd rather take them in at the sides than be mucking around too much in the crotch seam for version 3.

I'd better not forget length - this make has been positively Urkelesque! Both of the above version lengths are unhemmed with an extra 1.5cm of length added at the time of cutting out!

I know I am a tall girlie, but not THAT tall. My final step of faffing with this make was to add 2.5 INCHES to the hem in the form of an ingenious (or perhaps crazy) cuff (MORE pattern matching!). I think in part the extra length was needed for my work shoes, my brown brogues, because these pants on me really are a 7/8 length - very chic with a ballet flat, but WAY too short with a shoe like a brogue. I've added another 2 inches of length at the lengthen line, plus I will add more to the seam with version 3. 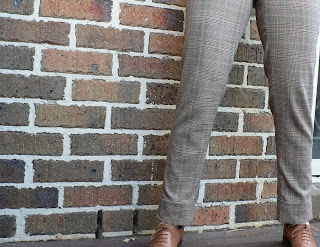 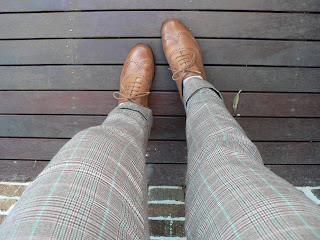 I wore them for a full day yesterday, and they were very comfy but are still just a bit big. They're fine for work as a wearable muslin - sadly the fabric is not great quality and after just one day of wear is starting to ball up already! It does make me feel slightly better about not finishing them very nicely on the inside. I was so over the fitting faffing I couldn't be stuffed finishing the edges. It will be a race I suppose between the fabric wearing out vs falling apart..... At least if I get one winter out of them they won't have been a waste! 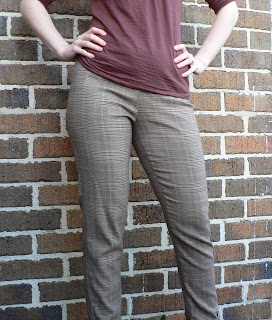 And so, to version 3 - my frankenpattern of size 8 and size 10 with a crazy little crotch extension going on. I've found another digital floral stretch cotton and I'm biting the bullet and cutting in - fingers crossed they will be a frump- and mumble pant-free zone!
Labels: Bottoms Clover Colette Patterns Finished projects