Finished - YOU ARE GOLD! pants

So a while ago I found some AMAZING gold printed linen at Darn Cheap, and the practical part of me said 'swish but not for you'. I wandered on my way but I couldn't forget it, and so eventually one Saturday morning I dragged my beloved in and showed it to him - I was thinking pleated pants, and he agreed that'd be a mighty cool combination.  Especially to wear to the now-very-sadly-postponed Rolling Stones concert that was our Xmas present to each other. So home it came with us. Months passed. My Burda trousers kinda sucked, then my many pairs of shorts kinda sucked and I was over trousers majorly. Couldn't face the idea of another fly front. But then I saw Kelli and Amy's Tessuti Suzy pants, and began to think that this could be my solution - crazy puffy pleated gold pants sans fly front! And so they were born. And they are indeed crazy, puffy, pleated and gold. 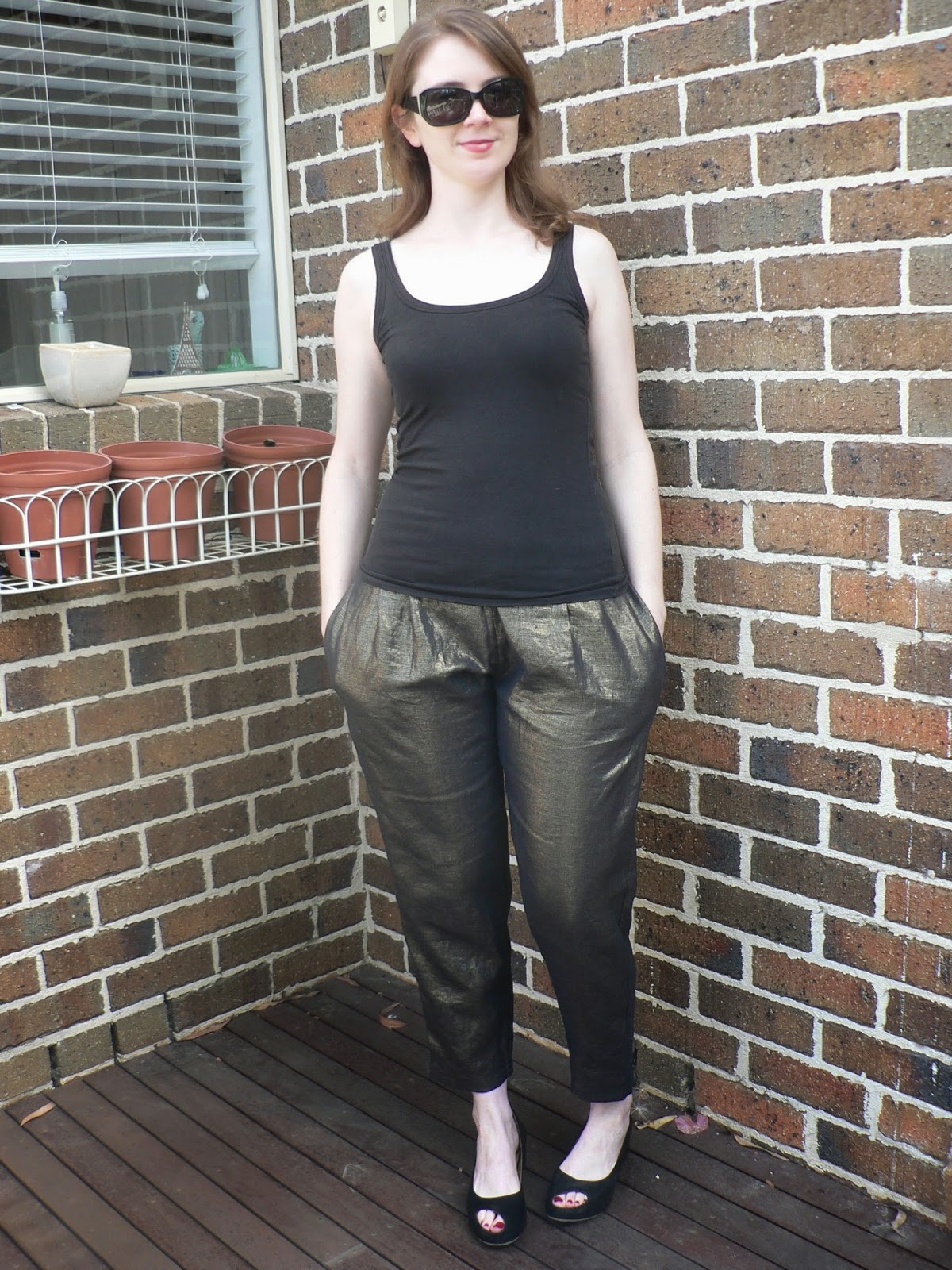 Now full acknowledgement to Tessuti's here - linen is not one of the recommended fabrics - they specifically recommend fabrics with plenty of drape - rayon, viscose and silk - super flows fabric. But this was a fairly fine and drapey linen, and I thought it would probably be ok. My verdict - ok - just. They are a bit too full and puffy right at the centre front - really not the region that a lady needs extra volume and puffiness, but with a fitted top they're kept reasonably under control, and without hands in pockets the mega-puff is not too bad. 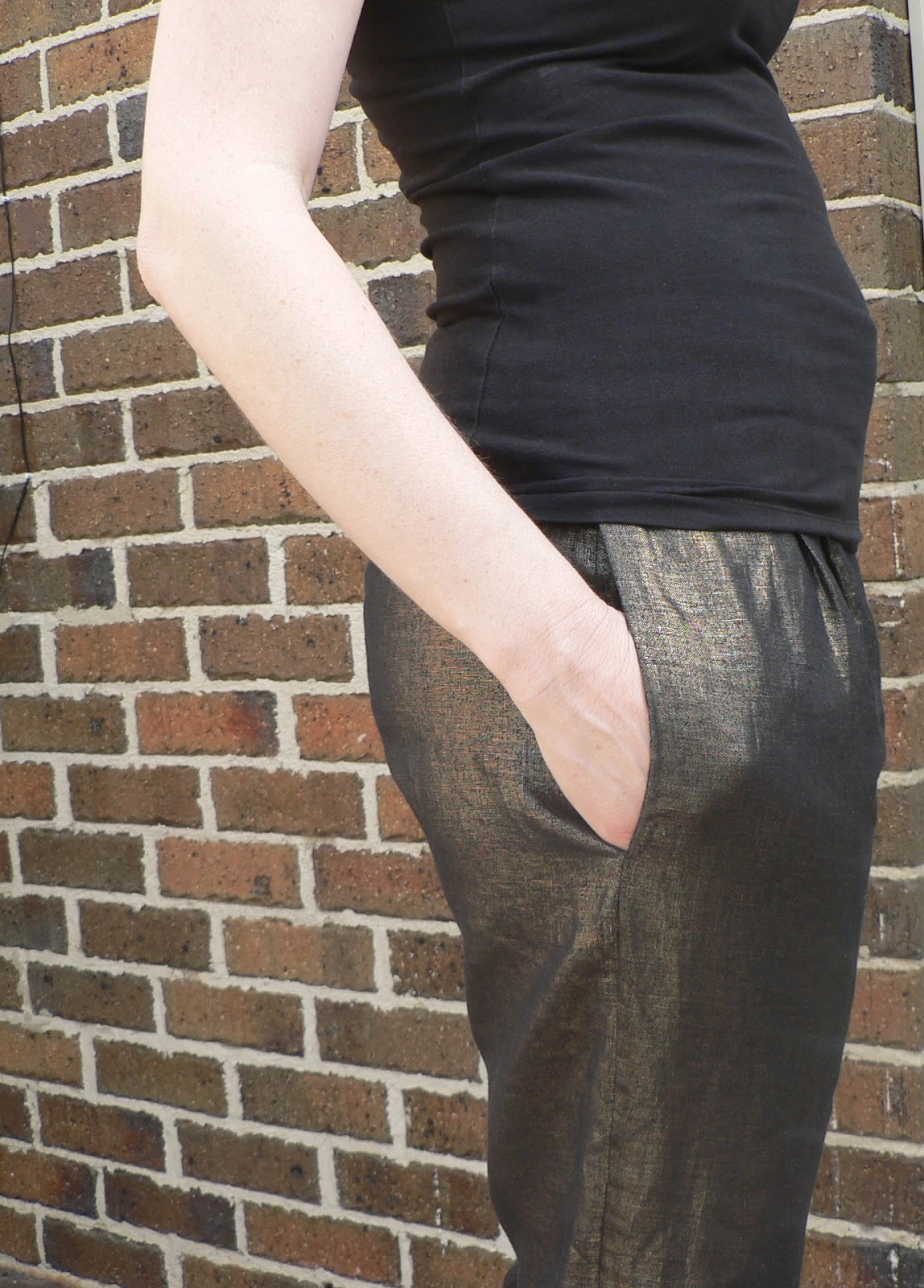 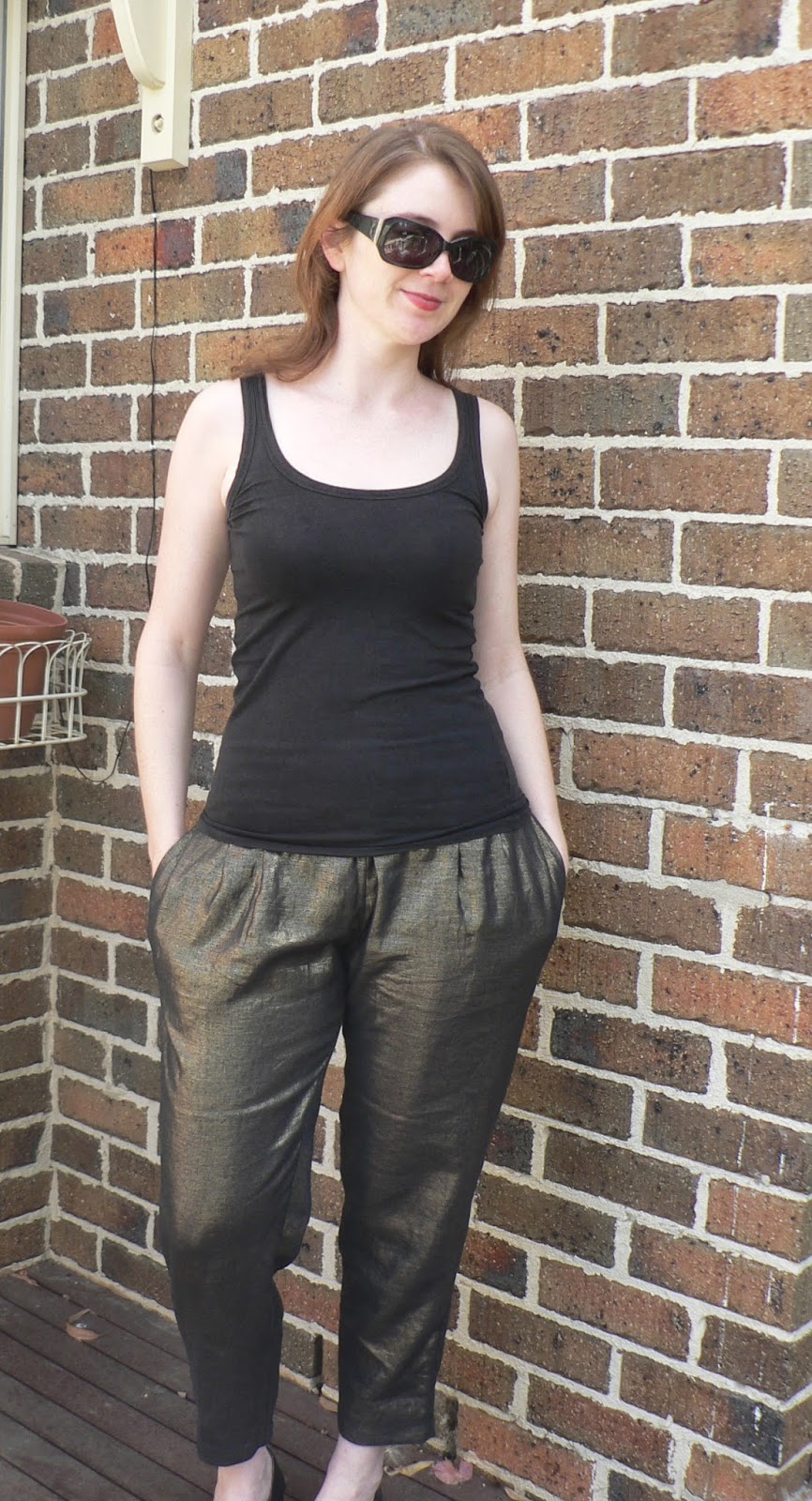 I cut the size small, but probably should have graded from an extra small waist to a small in the hips. They are a very generous size. These trousers are designed to be pull on, with an elasticated waistband but I'm afraid the idea of gold elasticated-waist pants was a bit too Golden Girls for me - I just don't need extra gathered bulk there. There's a few versions with elastic only in the back waistband out there, but not really a lot of info on how-to so I kind of had to wing it. I decided to cut 2 of each waistband piece. I interfaced the pieces that became the waistband facings, and when I attached the facing to the outer pieces at the top of the pants I used a 2cm seam allowance to try to make the finished waistband a little narrower (the pattern just says to turn the top edge of the unfaced waistband piece over to make a tunnel for the elastic - not the most stylish of finishes I have to say). Then I just stitched the waistband facing down in the ditch - much neater and tidier. Initially I planned to just shirr the whole back waistband piece, but after I did this it wasnt anywhere near tight enough so I threaded a narrow piece of elastic through at the top and stitched it down at each side seam. It's probably still not quite tight enough (they sit a bit low) - I may yet go back and add another piece. 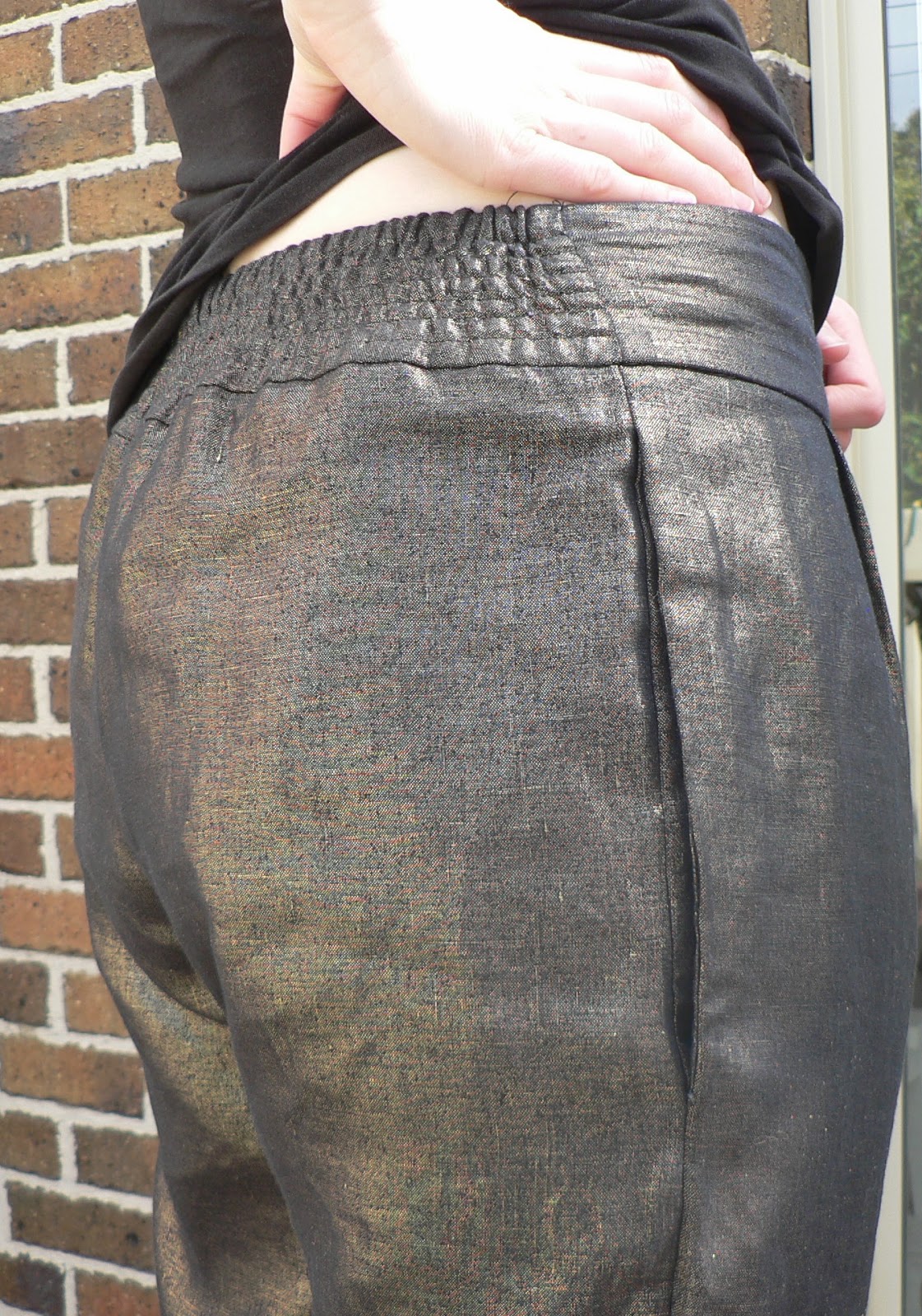 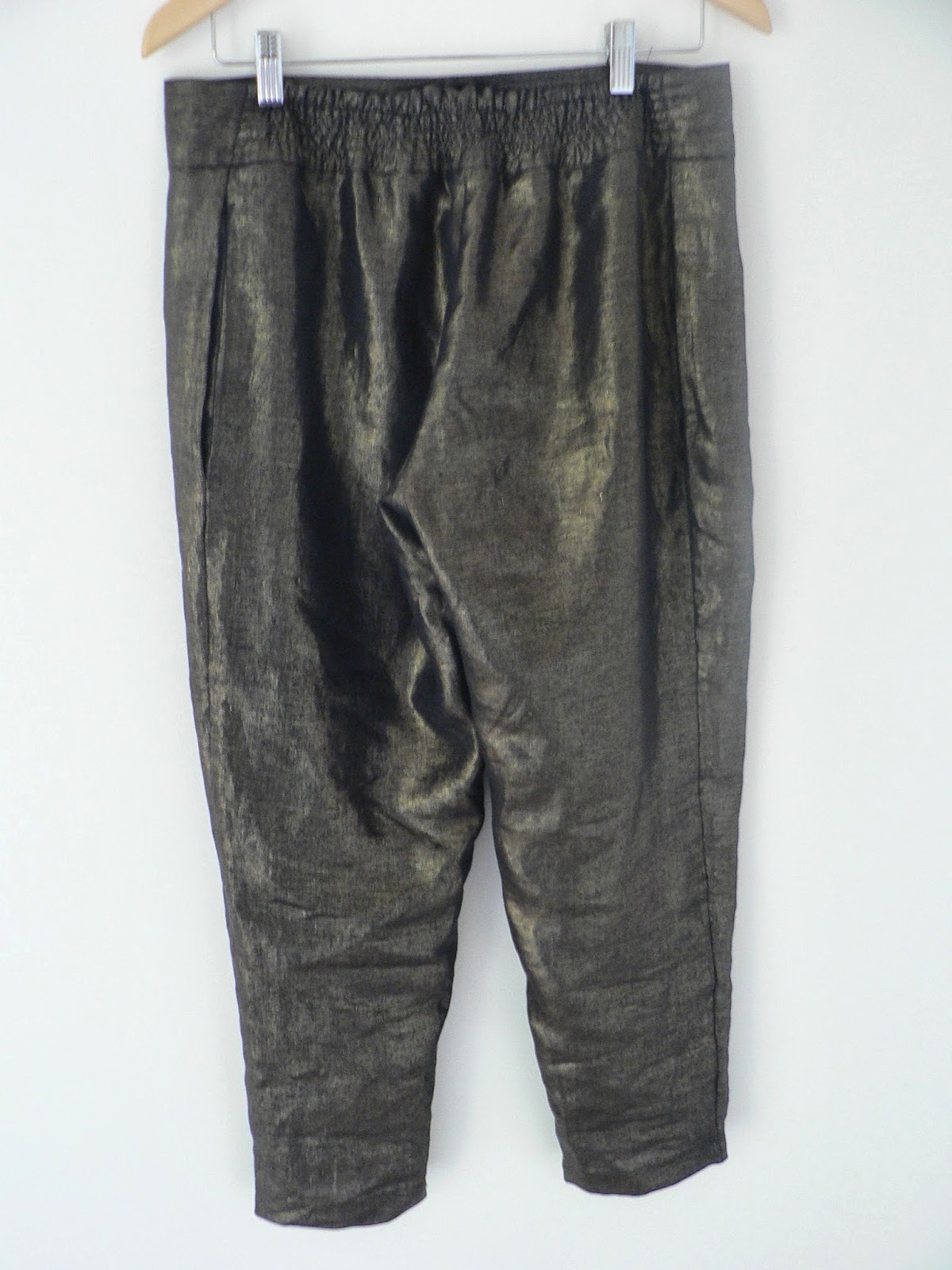 Because I don't have an overlocker/serger I am finding more and more that I think about how I will finish my seams right at the start of the planning stages of a garment, even before actually purchasing a pattern. I often choose to leave pockets out of a garment so that I can french my side seams, or change the pockets to slanted pockets, but this time I used this tutorial, which instructs how to make in seam pockets using french seams. It's pretty awesome. There is only the tiniest snip of raw fabric at the bottom of the pocket - the rest are all beautifully enclosed. I'm very impressed with it! I ended up doing french seams for every seam, and am really happy with the finish. 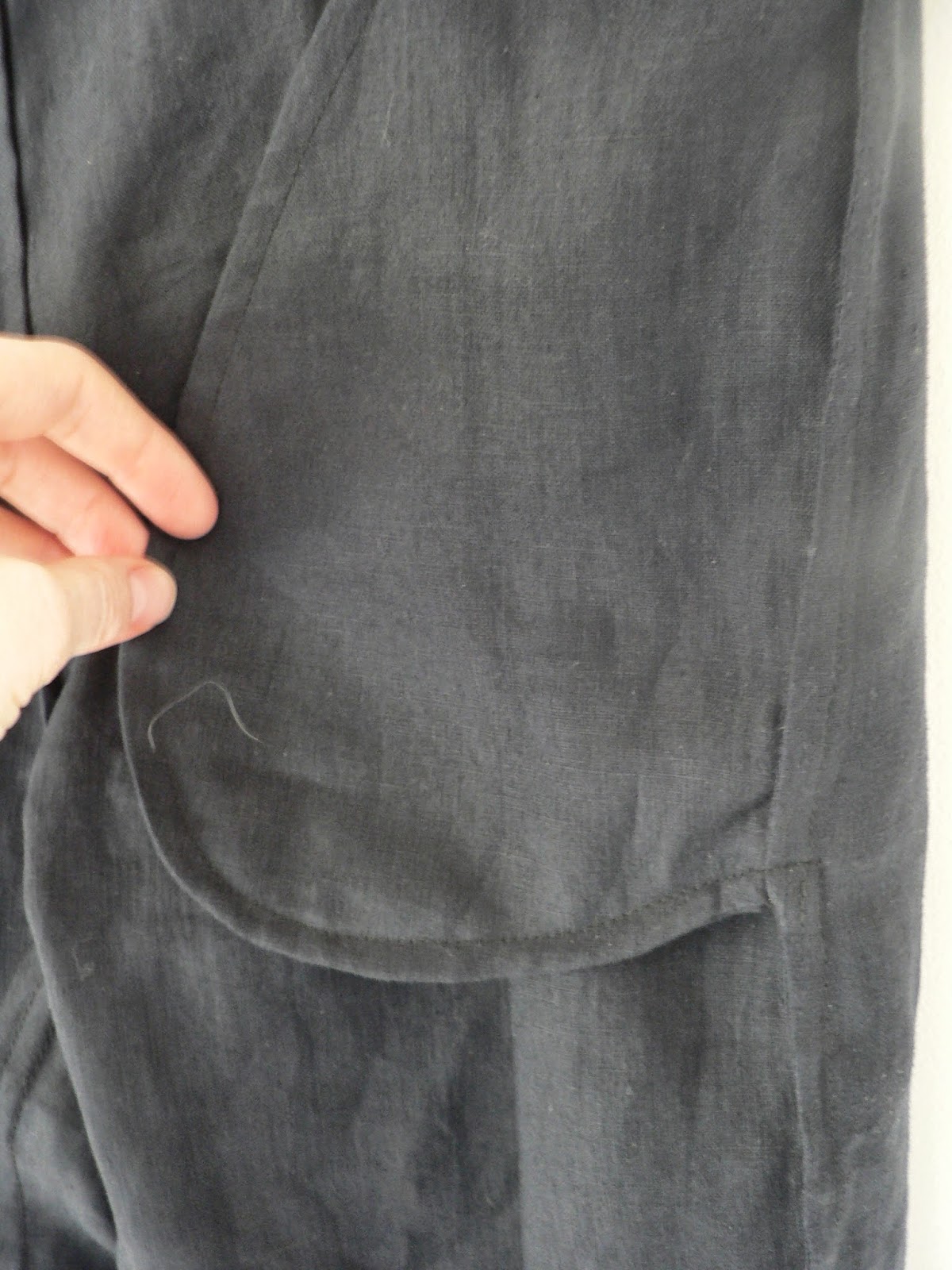 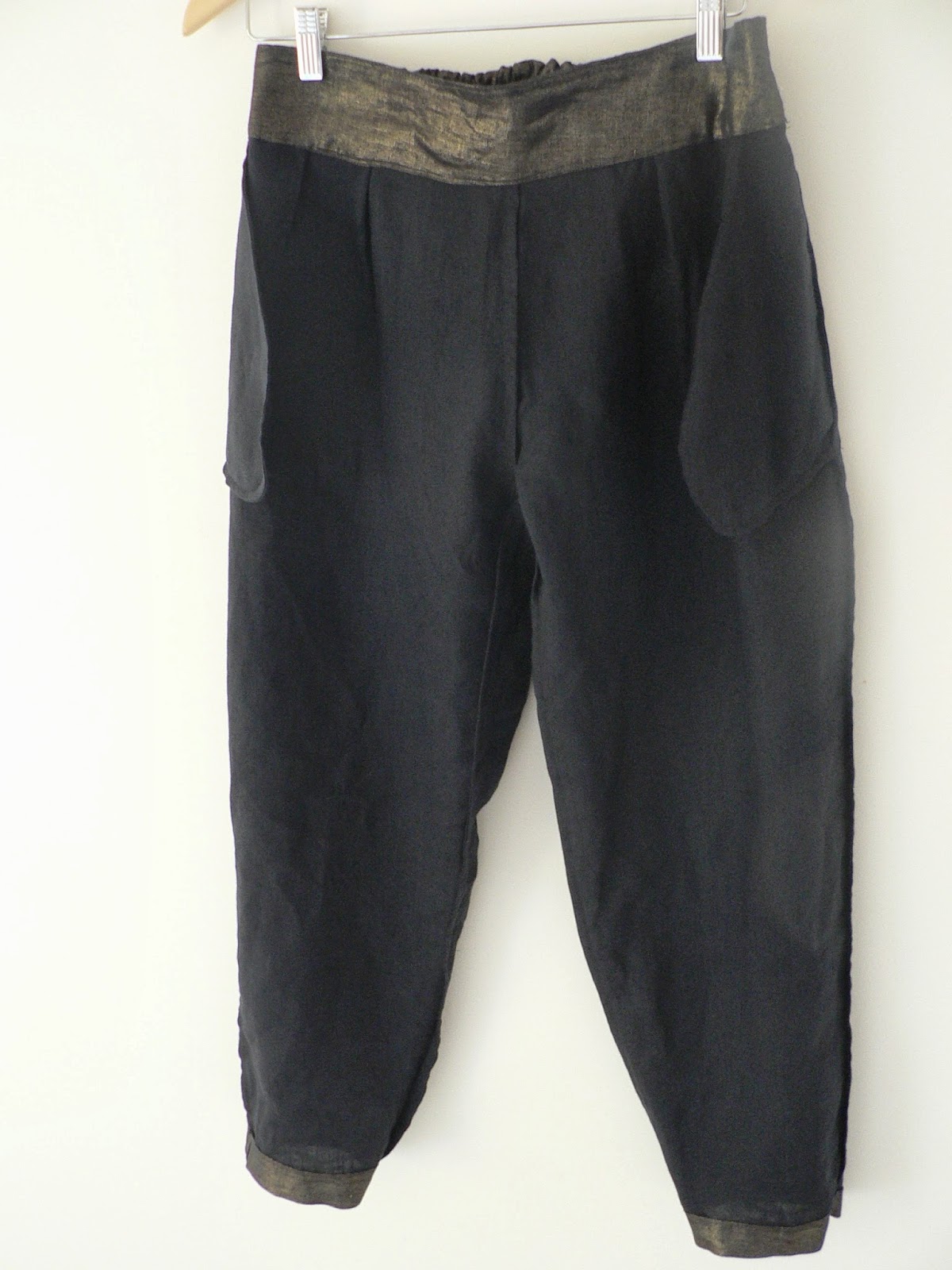 I also ended up narrowing the legs on the inner leg seams (to avoid mucking around with the pocket seams) to take out a bit of leg volume. I hemmed them a lot shorter than recommended too - I think the cropped length helps reduce the frump factor. 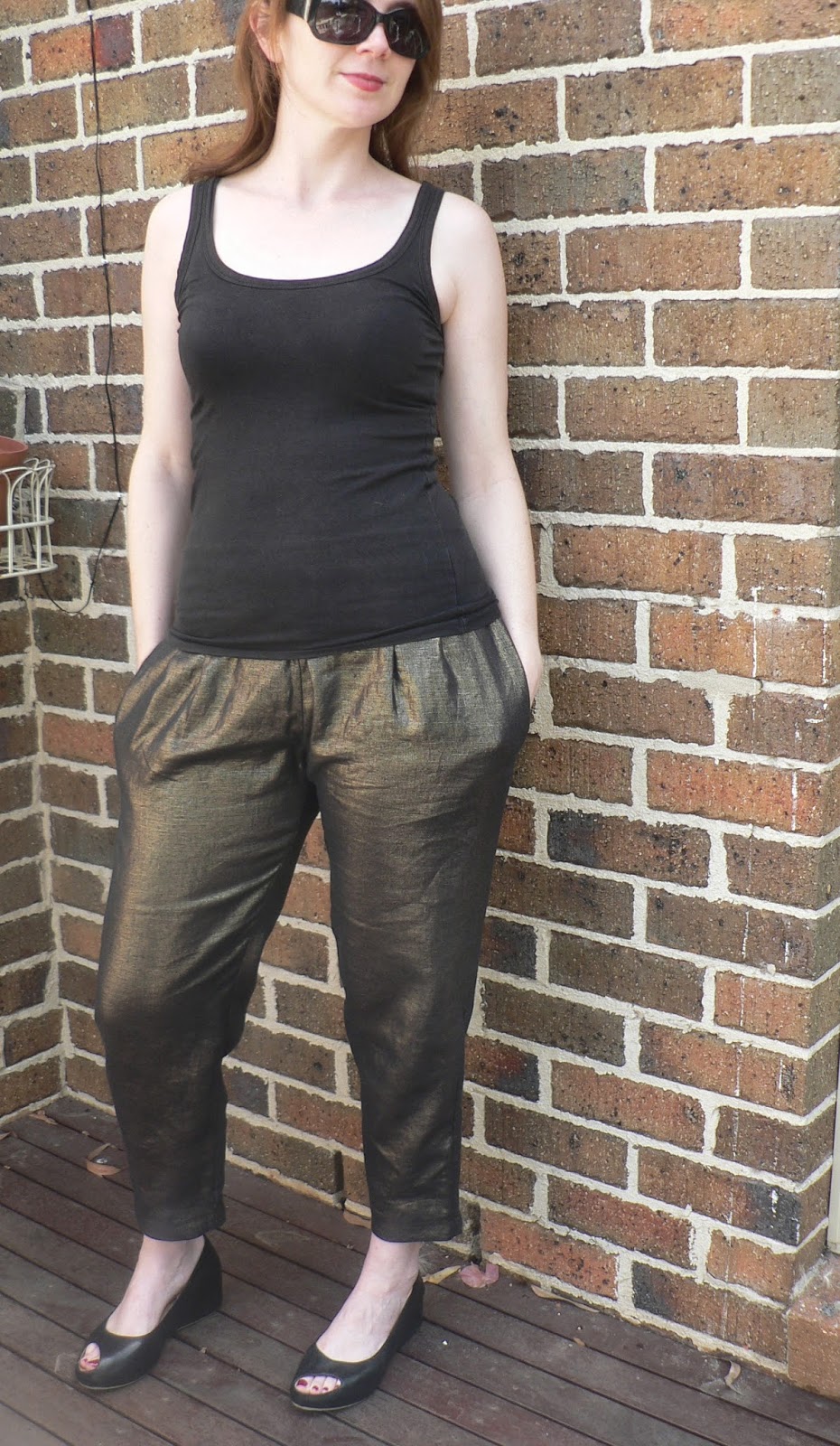 Now I was fully expecting my beloved to hate these. I made them while he was away for work, and presumed they would slot neatly into man-repelling territory but to my suprise I got a slightly ambivalent 'they're not terrible' (plus a query that 'weren't they meant to be a nicer slimmer less crazy style', but let's ignore that one). That probably sums them up - not terrible, but not stratospherically fabulous either. I do think they're a little bit fabulous though - what's your verdict? I won't be upset if you hate them - they're not the most sensible thing I've made, but I think Mick and co would have loved them! 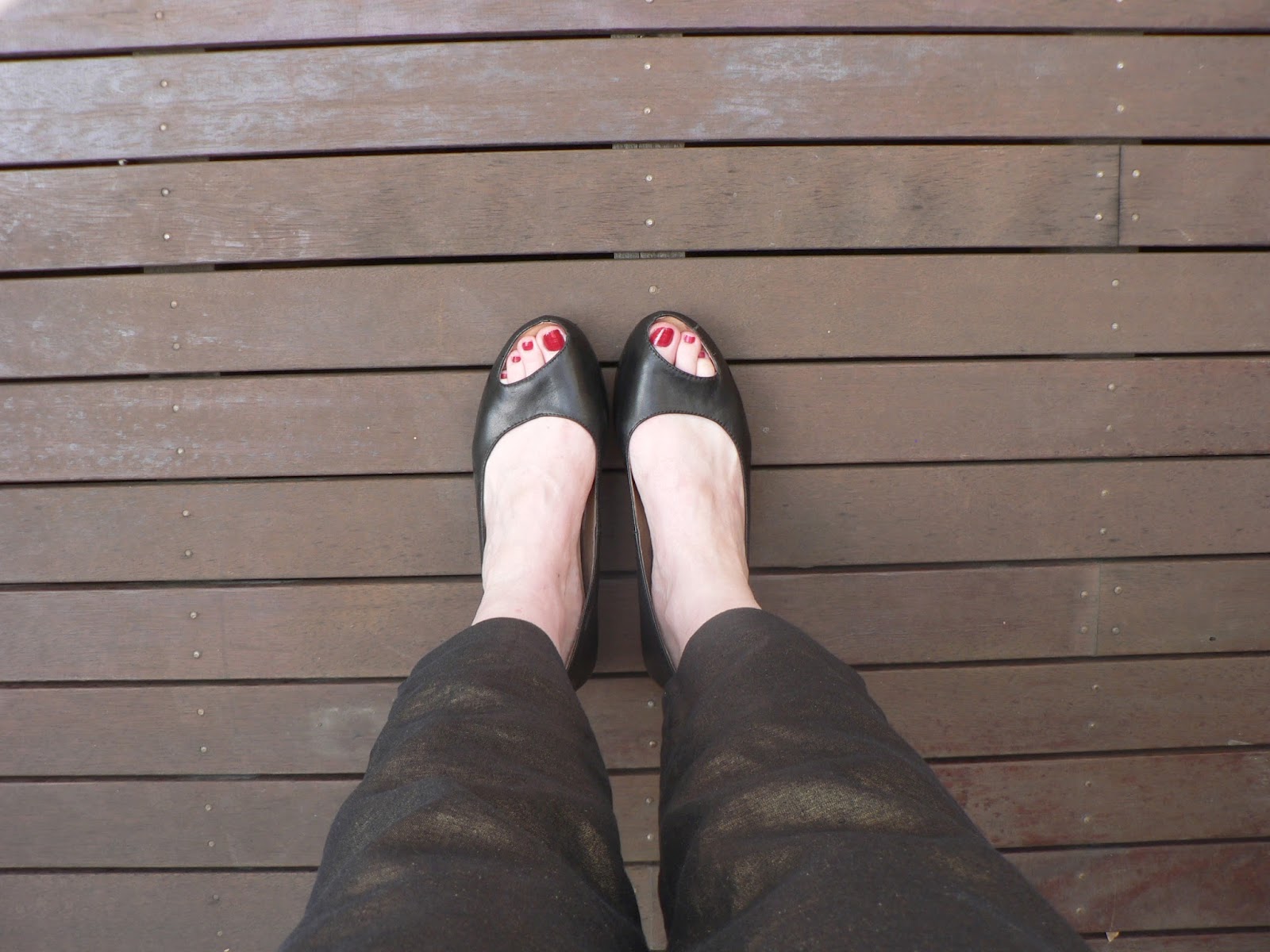