This could also be called the Emerald Frock of Many Swears. But I prefer to live in the moment, not the hideous, slippery, fragile silky past. Here finished is the frock I wore to my dear friends wedding over the weekend.  I adore the fabric - it reminds me of the divine green frock Kiera Knightly wore in Atonement..... 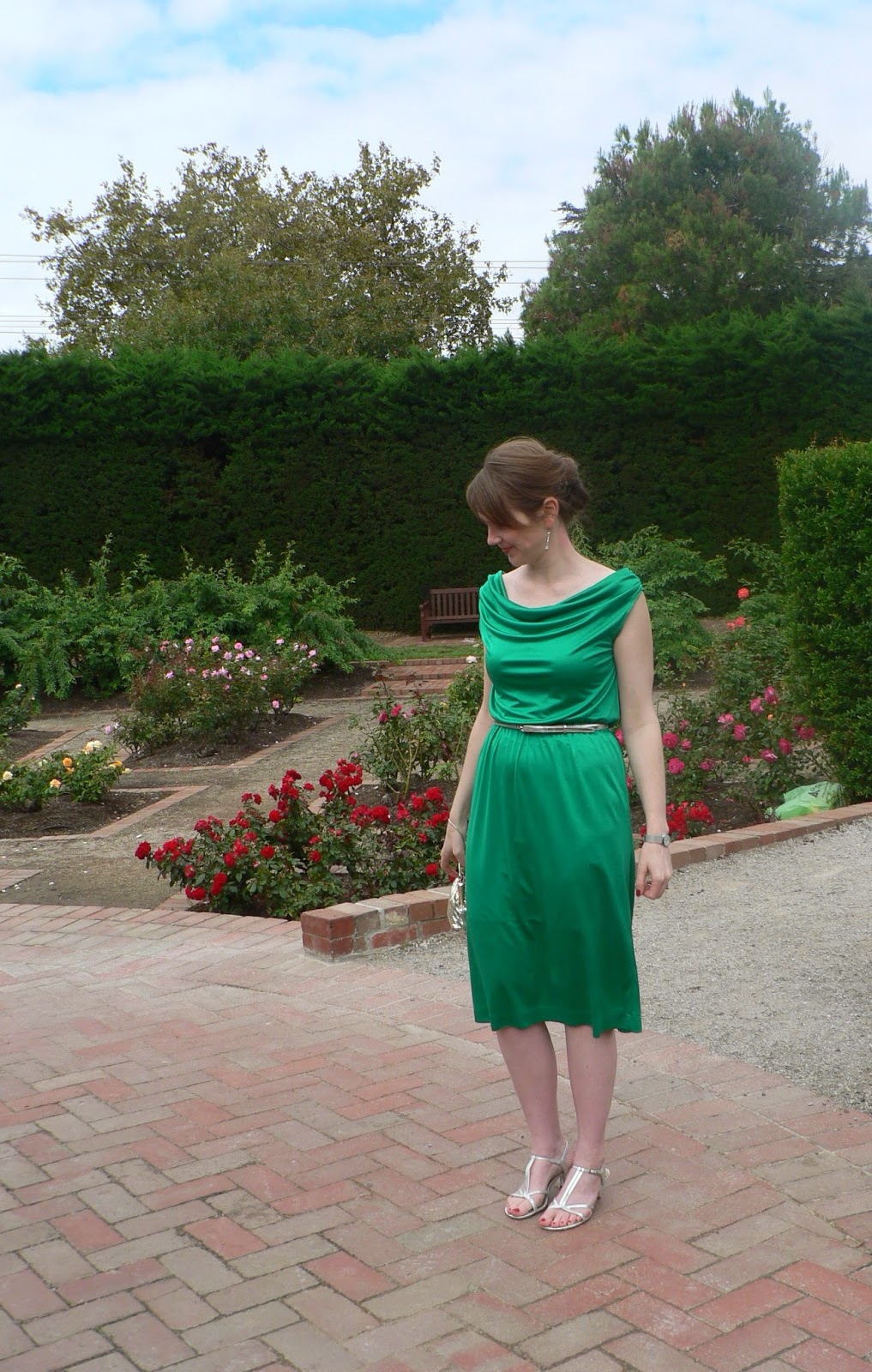 This seemed like the perfect combination - silk jersey purchased last year from Mood, made up into a lovely, simple drape neck dress - the out of print McCalls 6489. 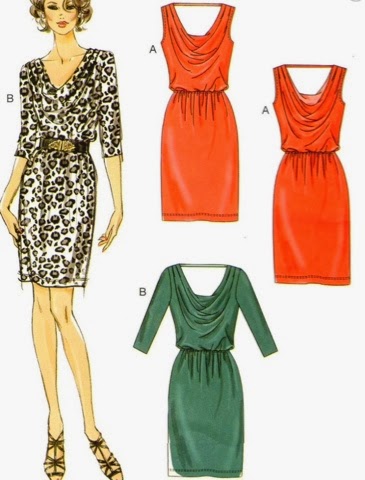 I'm being dramatic really. But I don't know that I want to go near silk jersey again in a very long time.  The pattern itself is great. Because my fabric was both precious and rather pricey I made a toile in a synthetic something-something that had a similar drape, and was so pleased with it (I was tempted to finish it properly). I cut an 8 bust, and grade up to a 12 at the waistband, and a 14 over the hips - I didn't want it to be too clingy as the jersey is so slinky and shows up every last unnecessary lump and bump. Looking at these pics I probably could have gone with a 10 in the bust, but it did actually look better in real life. The drapes are formed by pleating the shoulders - so clever and elegant: 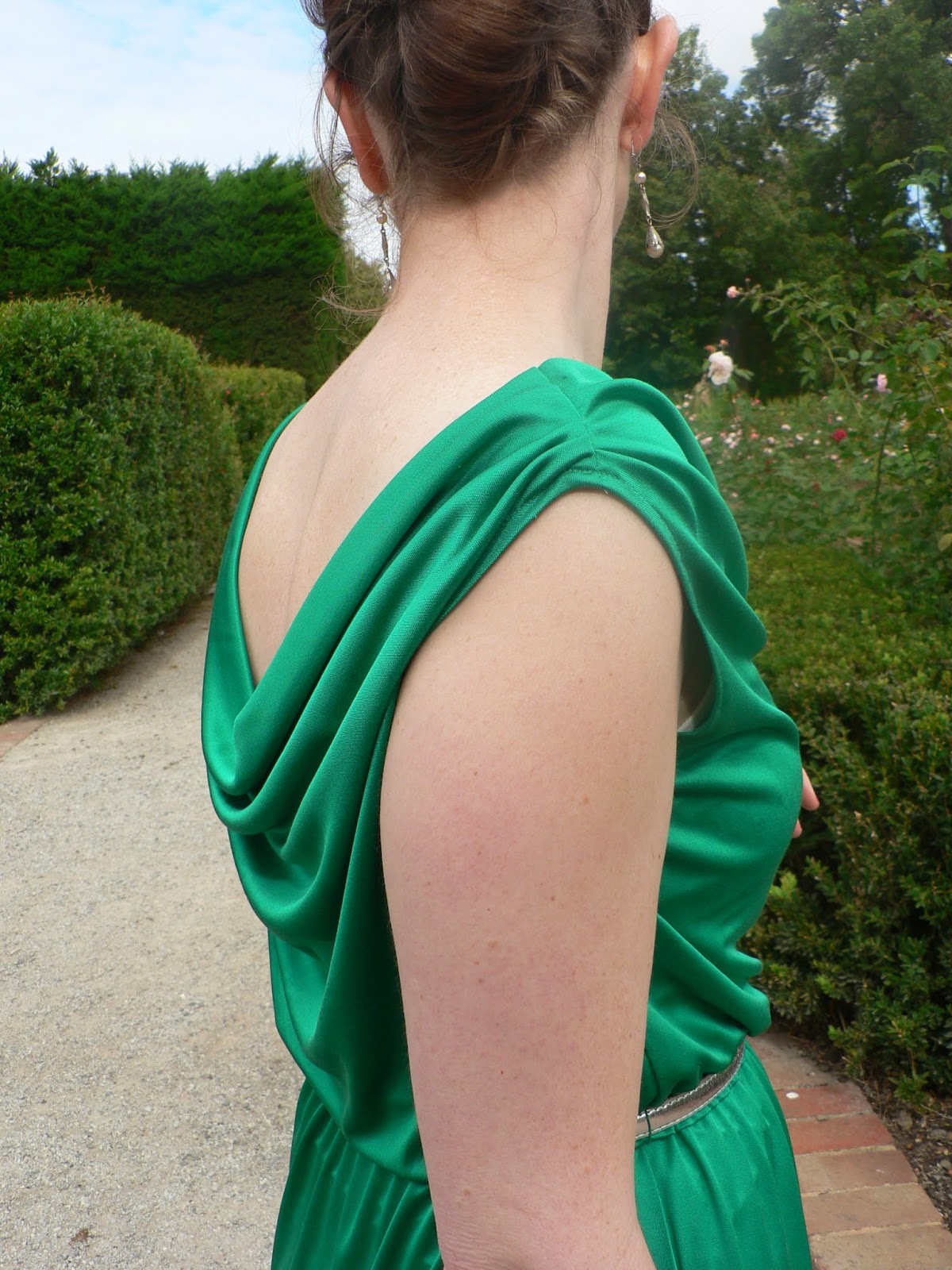 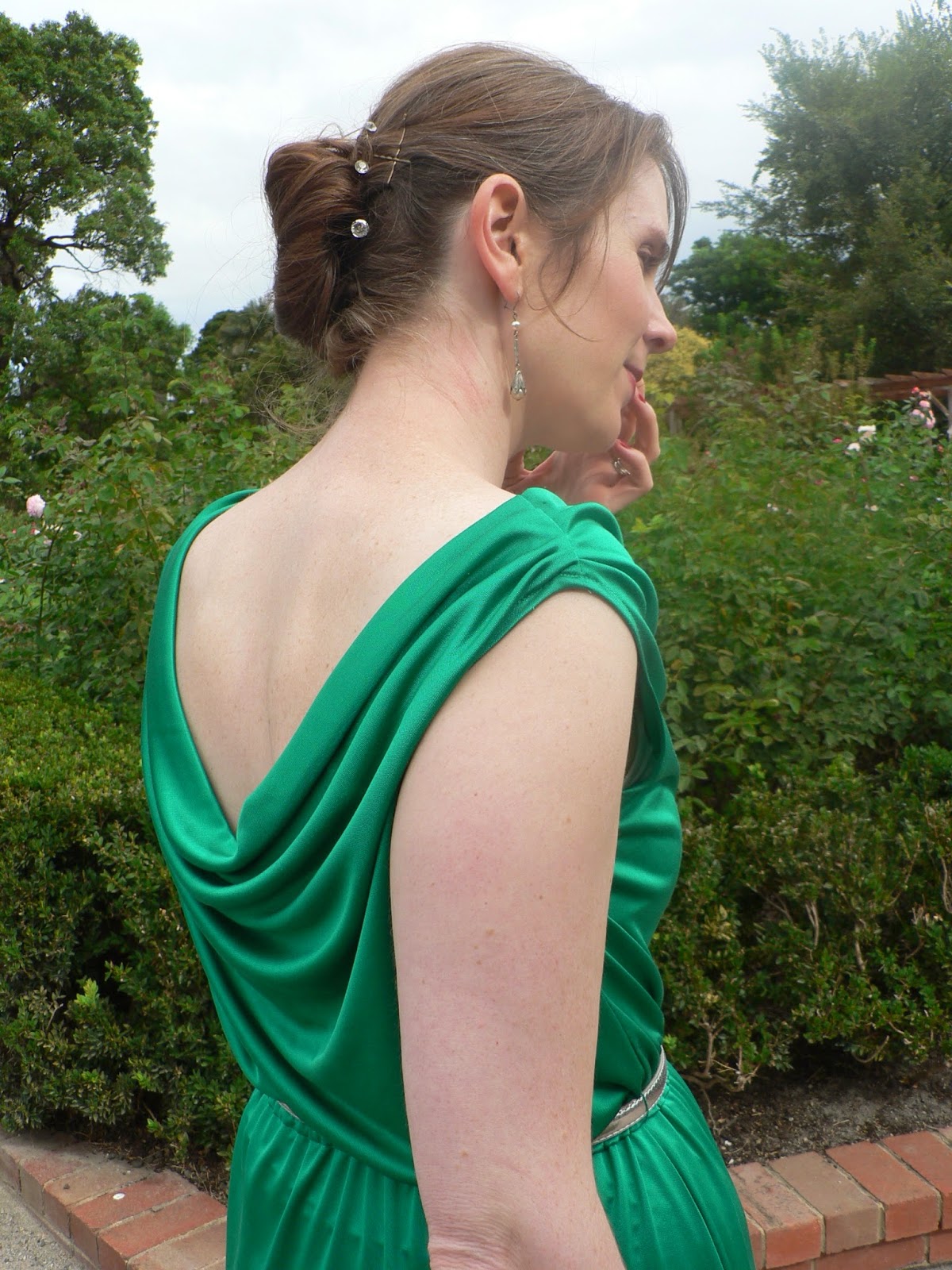 They sit so well and drape perfectly all the time. The cowl is self faced, which is a pretty standard construction method for knit cowl necklines. I didn't both to finish the edge of the cowl. I left off the tacky back strap and instead made ribbon and press-stud bra strap holders which worked very well. In retrospect I should have lined the skirt. I did wear a full slip underneath, for modesty and warmth, but the elastic waistband of the dress kept making the slip ride up a bit, hence the wrinkles. I used this Colette tutorial to make thread belt loops which I was THRILLED with (alert, sewing nerd). I want to  make thread loops for everything and anything now. 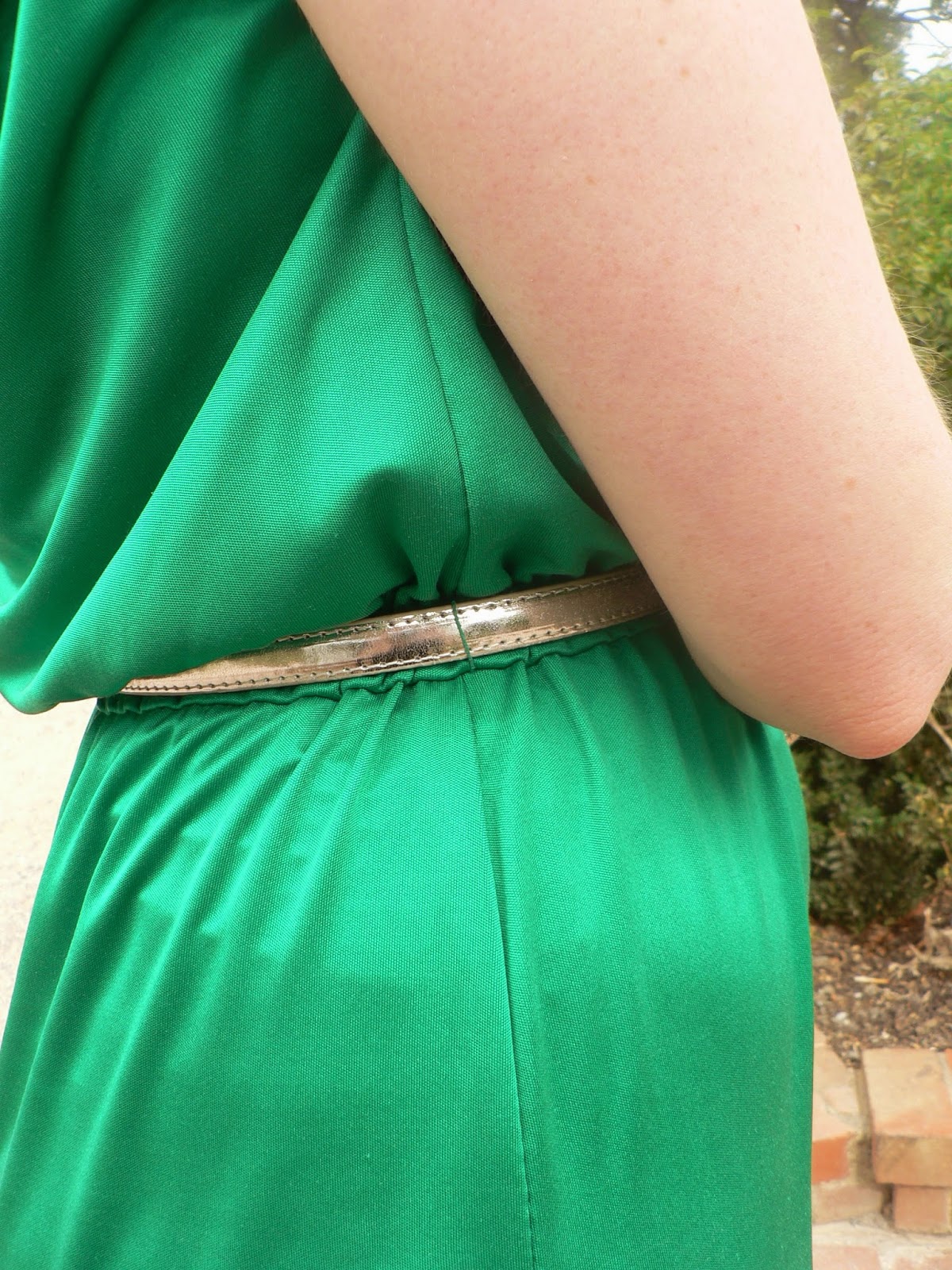 My main drama with this beastie was finishing the armholes. I realised, with growing horror, that a ladder had formed at each armhole, in the same spot, in the back, just below the shoulder seam - obviously handling the neckline and the pleats had created some strain there and I just watched the damn stuff unravel in front of my eyes. Fortunately I noticed it JUST as it reached the edge of the seam allowance. I applied some fray check (which stained) and hoped it wouldn't be visible when I finished the armholes. The pattern calls for the armholes to be finished pretty much just before hemming the skirt - next time I'll do it first, even before making the cowl pleats. Being a Big 4 pattern the seam allowances were still 5/8 inch, way too much to just turn and stitch on a tight curve such as an armhole. I tried turning and stitching. Awful. I tried binding and stitching. Horrendous. Finally I ended up unpicking the side seams, trimming away half of the seam allowance just to get it to turn nicely, and with a combination of steam-a-seam and sheer rage I managed to get them to look adequate.

Oh how I swore with this dress. I did use words that a lady should not. Precious expensive fabric plus best friend wedding plus crappy finishing methods = sounding like a sailor. Swearing when sewing - lets discuss.  Here are my top 5 reasons for swearing in the sewing room (ranked most common occurrence at number 1):
1 - Bobbin runs out just before finishing top stitching a hem. Usually the final hem. At the front of the garment.
2 - Front waistband attached to back of garment. Or vice versa.
3 - Dodgy zip insertion especially dodgy fly zipper.
4 - Any need for quick-unpick/seam ripper.
5 - Discovering shorts fit badly after nearly completing them. 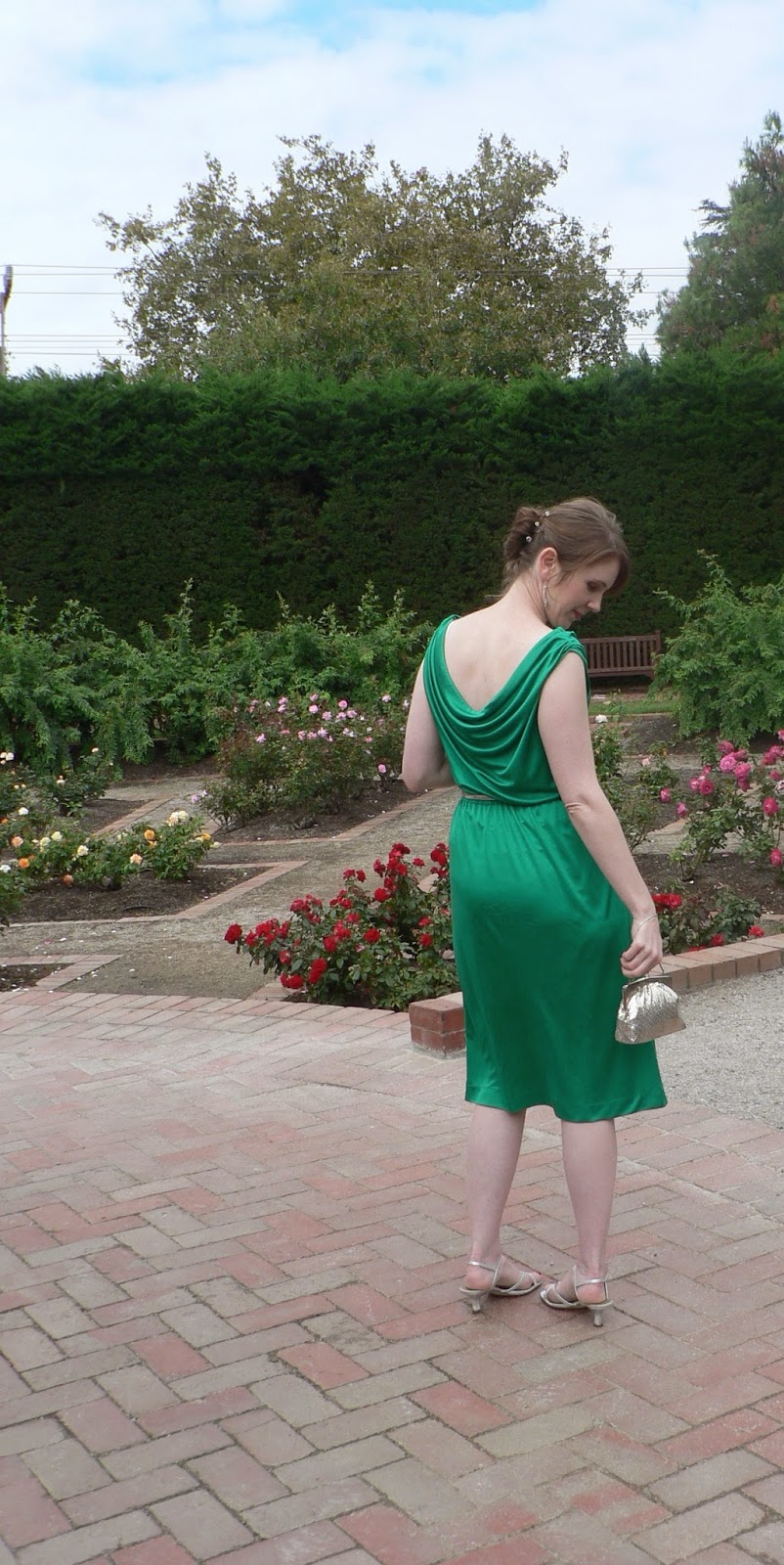 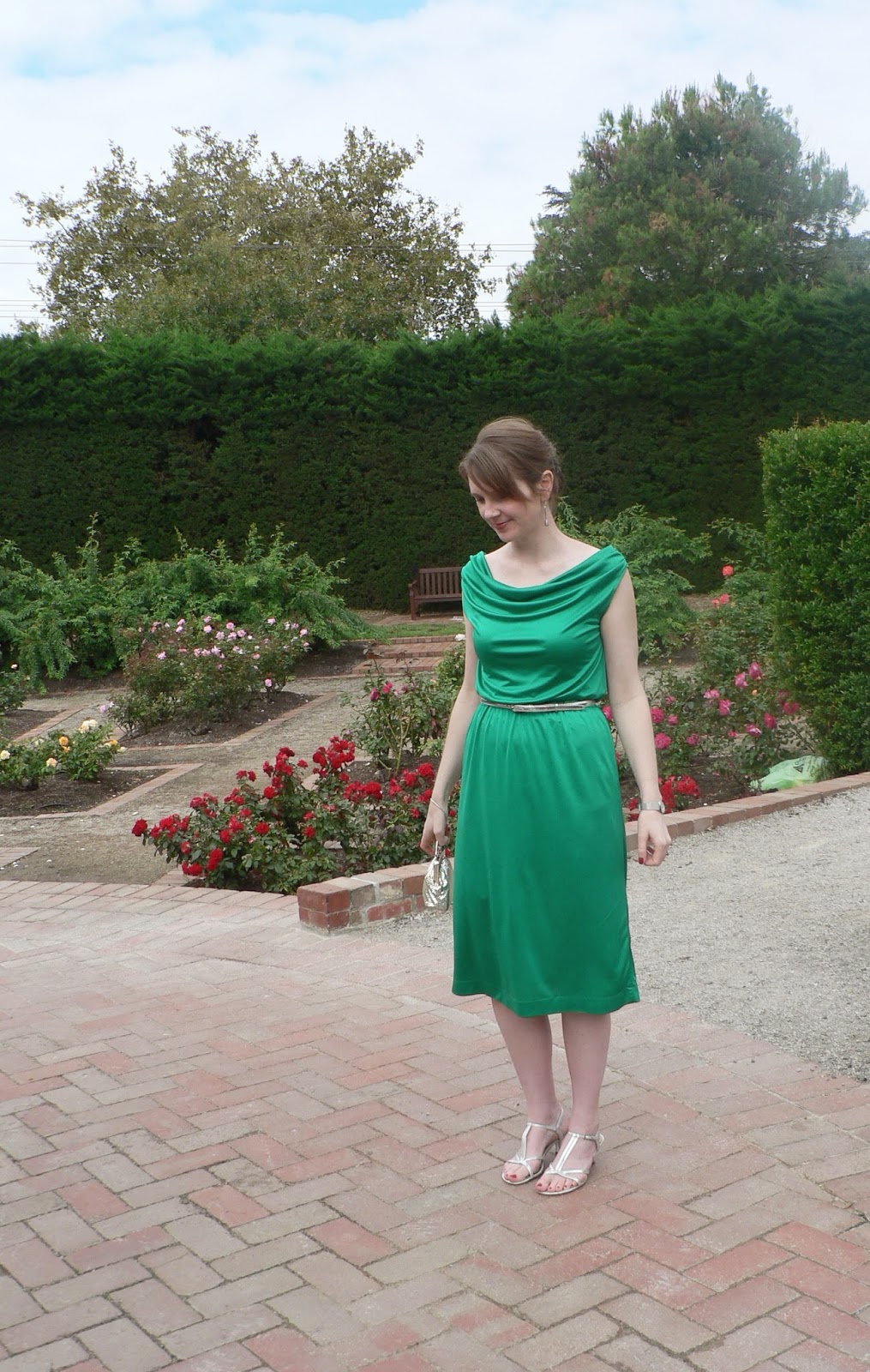 Anyway. It was finished in time, worn comfortably without any seams splitting open, and did receive admiration so I suppose one must call it a success. But like some of my other more stressful makes I did find I wasn't in love with it in the end. I just wanted it to be perfect and was peeved that it wasn't. But the bride was divine, the groom fabulous and it was one of the best weddings ever - and that's the most important thing, isn't it?
Labels: dresses Finished projects