Lovelies if you need a gateway pattern into coat making then this might well be it. It's the Liesl and Co Woodland Stroll Cape, my latest Stitch 56 project (check it out and get the pattern over here). I know capes might not be for everyone, and might venture dangerously close to the Territory of Tweeness, but with the right fabric choice and styling I think it's a great little wardrobe addition. I've wanted to make one ever since I found a vintage 60's child's cape pattern in an op shop and was utterly charmed by the pattern cover. Actually this pattern also comes in a child's version (the Oliver and S Forest Path Cape) and I can unequivocally state that if someone had made this for me as a little girl I would have been the most delighted and stinkingly cute poppet bopping around town. 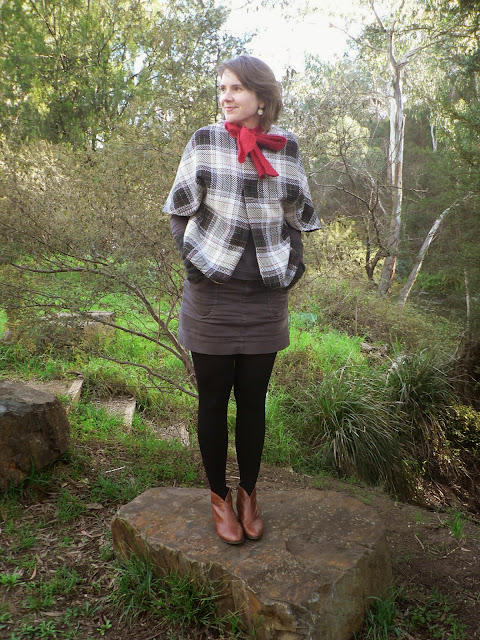 Being well and truly Autumn now in Melbourne means I need an extra layer on top of the 3 that I tend to wear from late April through to early October (my Preferred Temperature Range is 28-32 degrees Celcius). I've got 3 good RTW coats in circulation, but could definitely see a cape-shaped gap in the wardrobe. 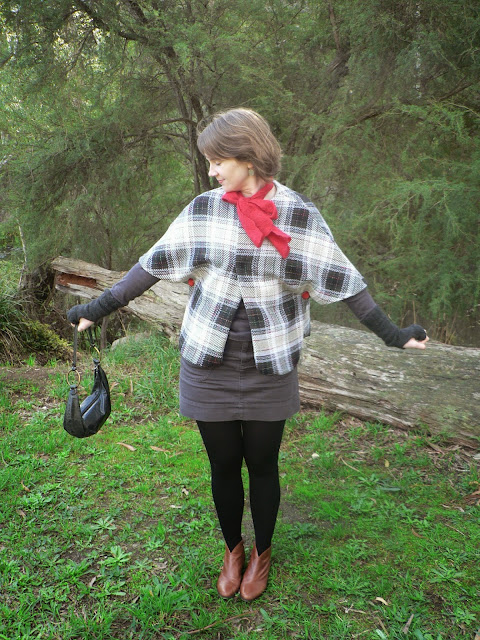 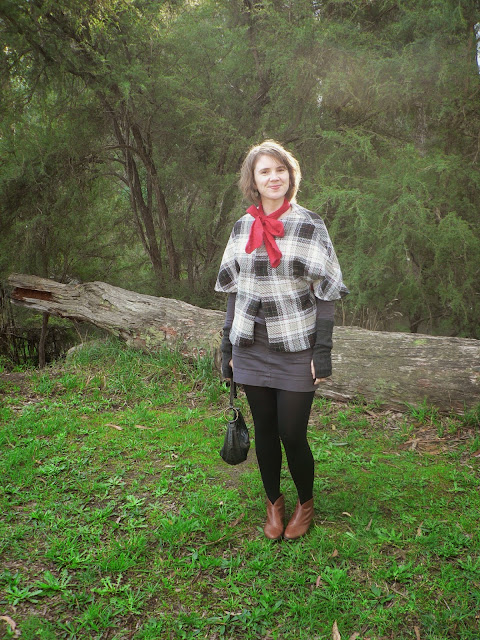 This is the first Liesl and Co pattern I've made. They only come in a digital format, but the PDF was civilised in size and came together very well. The grids made lining it all up very easy and also very helpful at assisting check-matching when I was cutting out my fabric. I made a small in the shoulders and used the medium for width and length and I'm happy with the fit. 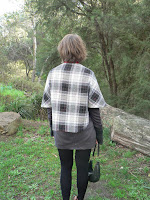 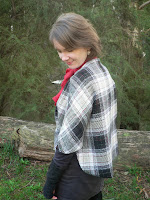 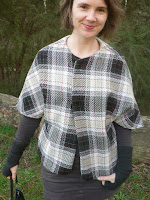 I agonised and deliberated for quite a while on the lining. The pattern is drafted with a full lining but the lining pieces are the same as the shell, except for a back neck facing. I presume it's to make life easier for a beginner, but I felt a bit uneasy at the notion of the lining not being a separate pattern and I don't like garments lined to the edge at the front openings without facings. I also didn't fancy doing buttons and buttonholes through just one layer of shell and a flimsy lining fabric. Eventually I decided to draft a front facing so at least the front closures would have more stability. I seriously considered a full circumferential hem facing around the sleeves and bottom hem, and if I make it again I think I'll make the effort to do this. 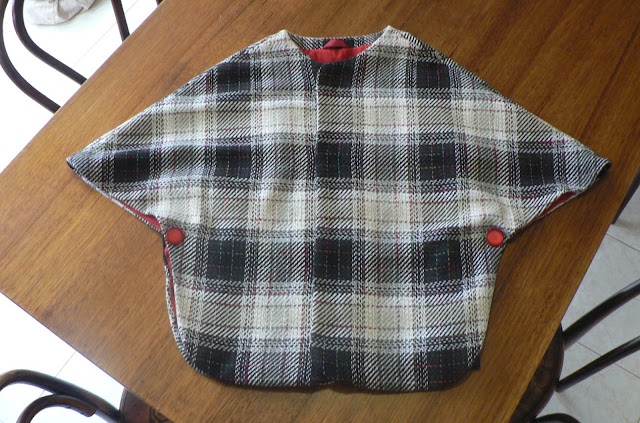 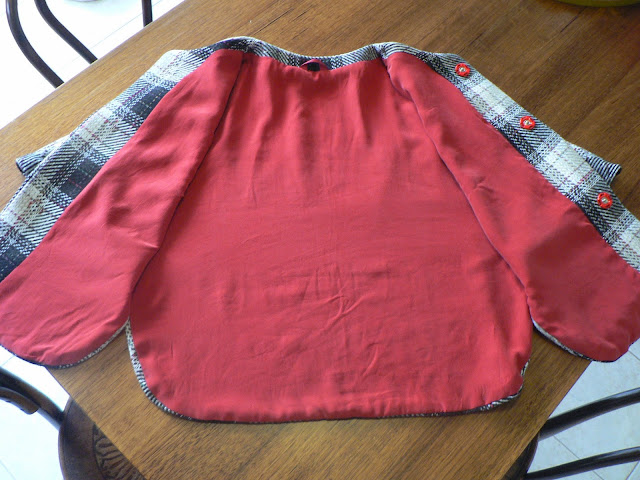 The drafting was very straightforward and I just took care to make sure it was wide enough for the buttonholes (which I didn't end up doing but more on that later). The pattern uses 1/2 inch (4/8) seam allowances, but my facings were drafted with 3/8 inch to make sewing the convex and concave curves a little simpler, and it worked out beautifully.

My lining! Don't hate me but I found 2 metres of a divine rusty red washed silk at Savers for $3 and I snatched it out of there so quickly I left burn marks on the floor. It had a few marks and tiny pulls on some bits, so was perfect for a lining, or so I thought. I'm not sure if it is a fabric that stretches (and I guess being a natural fibre it's entirely possible as most linings are synthetic) but when I sewed the whole shebang together I had a good 1cm of it bubbling up and visibly hanging below the hem of the cape (see below pic), and this was even after I trimmed 1/8 inch off the entire lining circumference to encourage it to roll inwards. 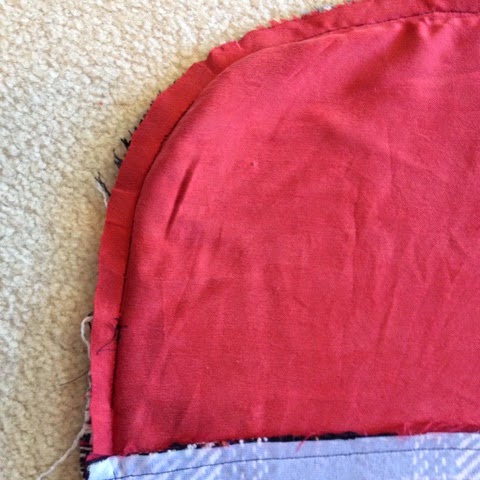 So after unpicking this enormous seam I trimmed around 10mm (close to 3/8 inch) off the bottom edge of the lining and reattached it, and now it does roll in much more nicely. I still hand stitched-in-the-ditch at the shoulder and side seams to reduce the chance of future lining droop. Having a hem facing would obviously have helped to prevent this issue. Even with being a droopy PITA the silk is gorgeous, was very easy to sew with and makes it deliciously warm. 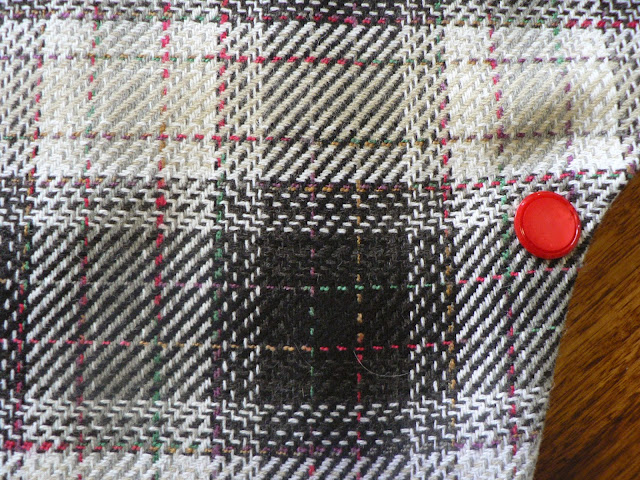 The outer fabric is a lovely wool blend purchased from Darn Cheap last summer for something like $2m. Shocking I know. So this was really an extremely frugal garment. It doesn't use much fabric though, so splurging on some fun wool definitely would not break the bank.

My sewing machine is a bit of a turd when it comes to buttonholes in thick fabrics, so after a couple of practice attempts I abandoned the idea of buttonholes and buttons, and instead sewed the underarm buttons (vintage from the stash) through both layers and went with these fun red snaps, also from Darn Cheap. Since taking the outside photos I decided, based on a snap poll of my family on Mother's Day, that it needed a third snap, and I also have shifted the top one a little. 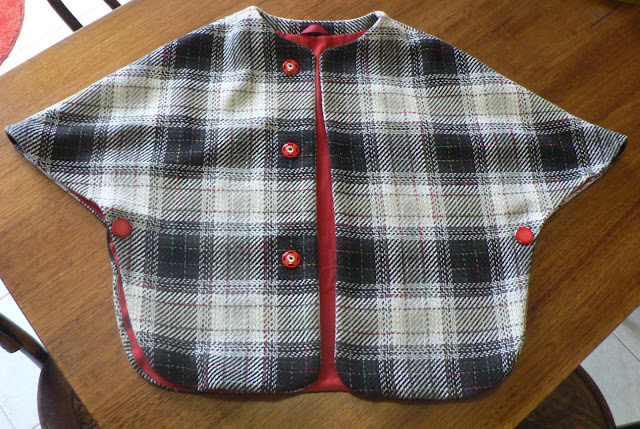 I'm am absurdly pleased with how this has turned out. I was a bit ambivalent midway through, but the simple shape and lovely curves (and check matching - my word it's near perfect!) make me very happy indeed (I do think those curves are rather Chanelesque!). For an experienced beginner I think it's a great outerwear pattern to try or perfect if you wanted a bright, fun little winter piece in an outrageous colour for a very reasonable cost. I'd love to make one in a lovely plain camel wool with self covered buttons. My mum would like one in velvet. And a bright fun mexican oilcloth would be great too....

Thoughts on capes? Twee or chic? Does anyone know if washed silk stretches? Is there a little girl-child in your life who'd love one the mini-me versions these this winter?

Many thanks to my darling friend Boos who braved a feral windy day without a cape or coat of her own to take these pics of me in Warrandyte. It's so much easier to have a genuine smile when someone is actually behind the camera!