I've had half a week of no husband. The end result, of course, has been a sewing binge, and I am now the proud and (excessive use of superlatives be damned!) ecstatic wearer of these:

They are the Barrie boy leg undies, from Kitschy Koo and I must thank Jo for reviewing this pattern a couple of weeks ago.

Underwear. Some get hugely excited about making it, some desperately bored at the concept. I'm definitely closer to the bored end of the spectrum - I have zero interest in bra making, and in fact my Husqvarna and I recently came to a handshake agreement that neither of us would get involved in such shenanigans. But undies I was keen to try - I hate scrap wastage and have been stockpiling lots of large knit scraps from various tops over the last 2 years. I was willing to invest a little time in trying a pattern that would give me a similar result to my beloved RTW faves - the Jockey Pariesienne.  I did try to make a pattern off a tired pair of aforementioned Parisiennes which was hilariously unsuccessful.

So, the Barrie Boyleg pattern. A nice small PDF of course, about $12.50 AUD at the time of purchase. Good instructions - simple dot points for 'badass' sewers, or several pages of photographic instructions for those that need a little hand holding which I'll be honest, I didn't look at. There are two views, a lower rise (which isn't particularly low) and a high rise. Plenty of modelling of both on the Kitchy Coo website (sorry, I just couldn't bring myself to pose in them myself but you'll have to believe me that 100% of people who have seem them gave them 2 thumbs up).

According to the measurement chart I came in at a 4 but they are quite a bit bigger than my Aussie size 12 RTW jocks. They're not too big but I think over time as the fabric stretches they might be so for my 4th version I trimmed off a little closer to the size 3 at the side seams. They come together quickly and easily. I smashed out 4 versions of the lower rise, all varying slightly, and have tested them all.

I'm delighted to declare my bum within them a complete wedgie free zone. 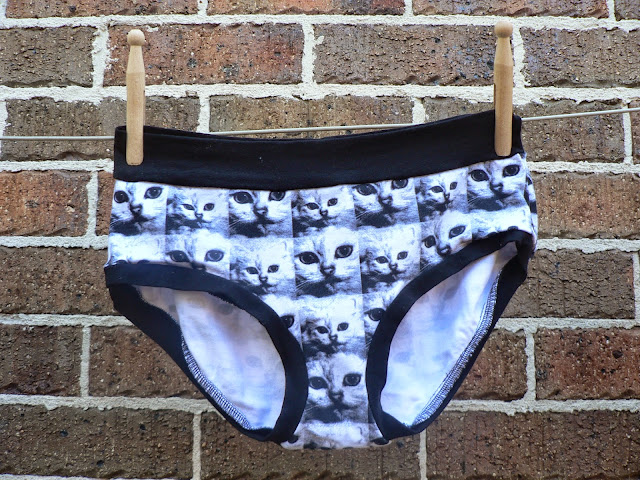 Yes. That fabric again. What? They are magnificent. Straight size 4, no changes. Took about 45 minutes to make, during which I was laughing almost constantly in anticipation of the final product. I find banded undies, both RTW and these, have a tendency to dig into the flesh of my muffin top a little - not uncomfortably but enough to sometimes be a wee bit unflattering under fitted clothing. These passed the work/gym test with flying colours. And made my workmates laugh because yes, I flashed them. I couldn't help it. 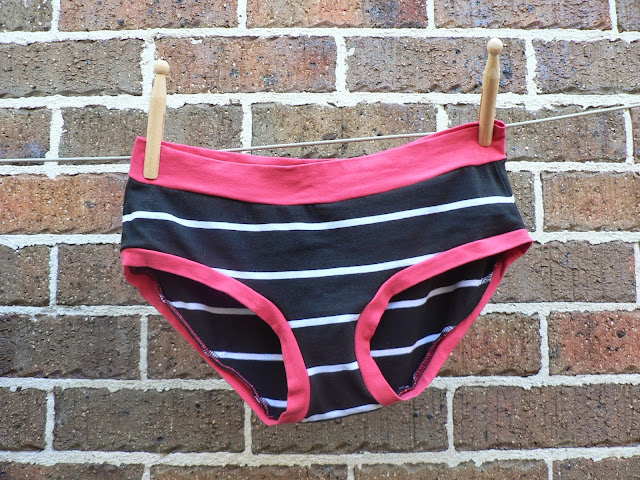 Leftovers from a Mandy top. I experienced with the bands this time by making them slightly longer, in the hope there'd be less digging in - didn't really make a difference. Again very comfortable and the husband declared via text message that they were less creepy than the kitties. Yes I matched the stripes - don't you know me at all??? 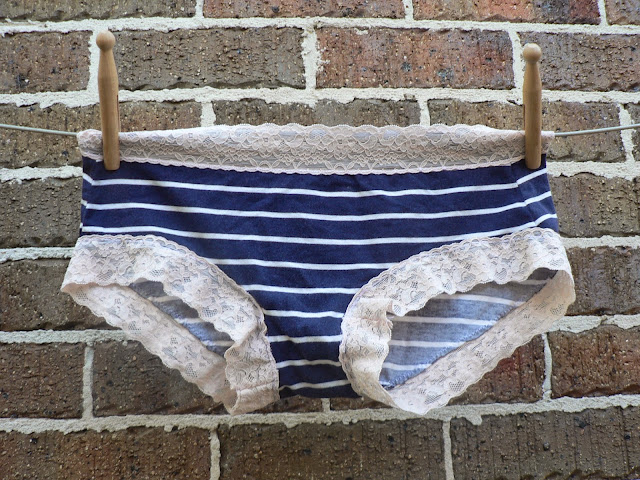 Left overs from my Audrey dress. These are probably the least successful pair, and look a bit dodgy due to some rough lace application. My RTW faves use topstitched elastic lace rather than bands and this gives a much smoother line. One of the pattern testers made them up like this, and this was what prompted me to buy the pattern in the end. The lace is a bit too wide, and I made life hard for myself by attaching it in the round, but they're still comfy, wearable and passed the gym class test (2500 steps in that class according to my Vivofit and 0 wedgies!). 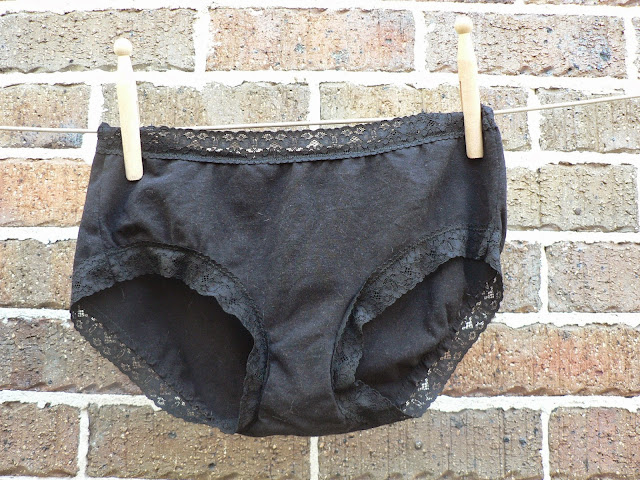 My favourite as they are the closest to my RTW undies. Slightly bigger seam allowance taken at the side to make them a little smaller, a little of the seam allowance in the legs trimmed off, then the lace attached in the flat by gentle stretching as I stitched (i.e. not cutting to the length of the band piece) before closing up side seams. I just used a zigzag but I might experiment with a twin needle for future versions. This version only took about half an hour and the flat attachment of the lace was far less fiddly. Worn all day with complete comfort.

I can't see that I'm going give up my beloved Parisiennes forever, but I'm so pleased to now have a pattern that I can whip up with any leftovers from other projects. The success I think will depend on the quality of the lace. Mine was all from Darn Cheap - each pair took about 1.7m I think - a lot more than what I thought. The fabric was all cotton plus a bit of Lycra/Elastane, and in the instructions this is what is recommended, to help your Barries ping back into shape wash after wash.

Do you have a fave undie pattern? Gertie's pattern was the other one I considered but I'm pretty happy with this one I must say.... 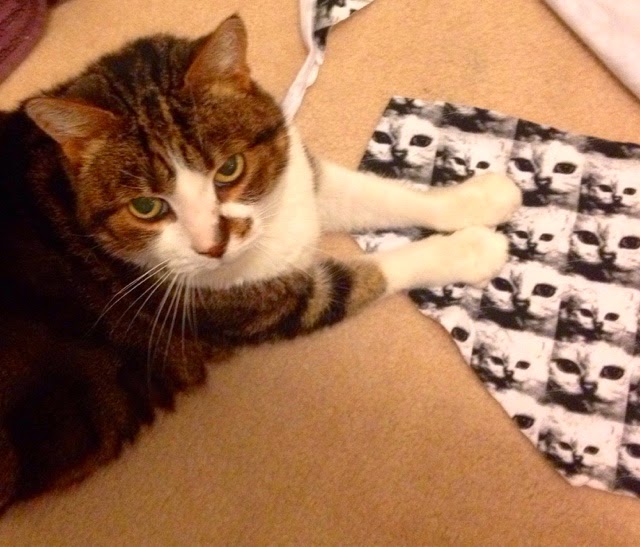