Shorts making - some wins, some losses.

Meh. I'm over shorts at the moment. I've spend the last 6 weeks or so making 3 different styles and patterns, and for the most part they've been duds. I can't say it's been a complete waste of time, but its been a moderate waste of time, fabric, and general sewjo.

We'll start with the positives. In an effort to be a bit more frugal I decided, rather than buying the Grainline Maritime shorts, to try some shorts out of one of my Ottobre mags. I thought they looked fairly similar, and was keen to try this pattern in particular, as it was essentially the same as a pair of fitted trousers in the same issue, so essentially they'd be a wearable muslin for 2 garments. 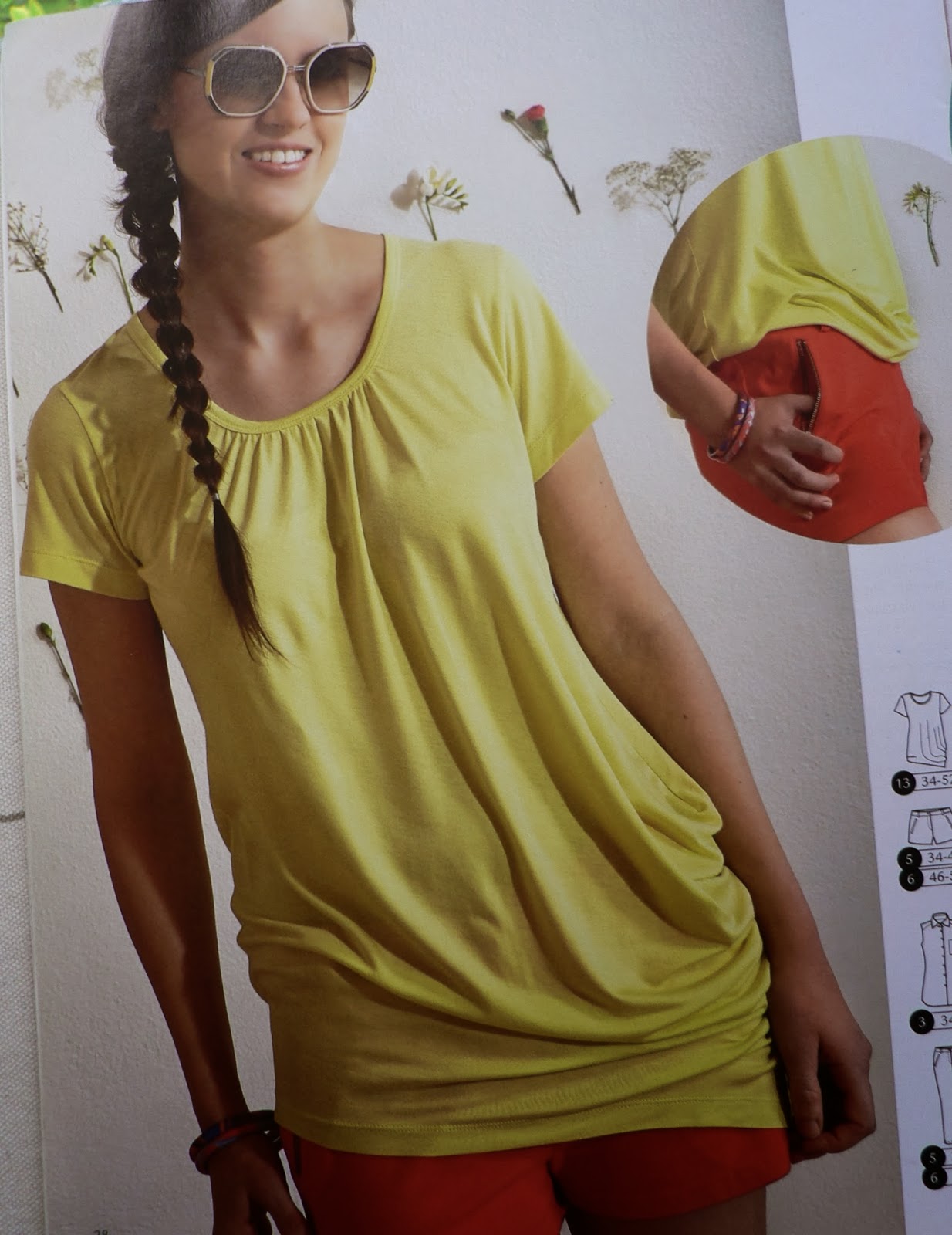 The photo is terrible, but they are a slim fitting short, with sort of welt zip pockets designed for a woven fabric with 3-5% stretch. I didn't like the zip pockets at all, so redrafted them to look more like the Maritime shorts, with reasonable success. 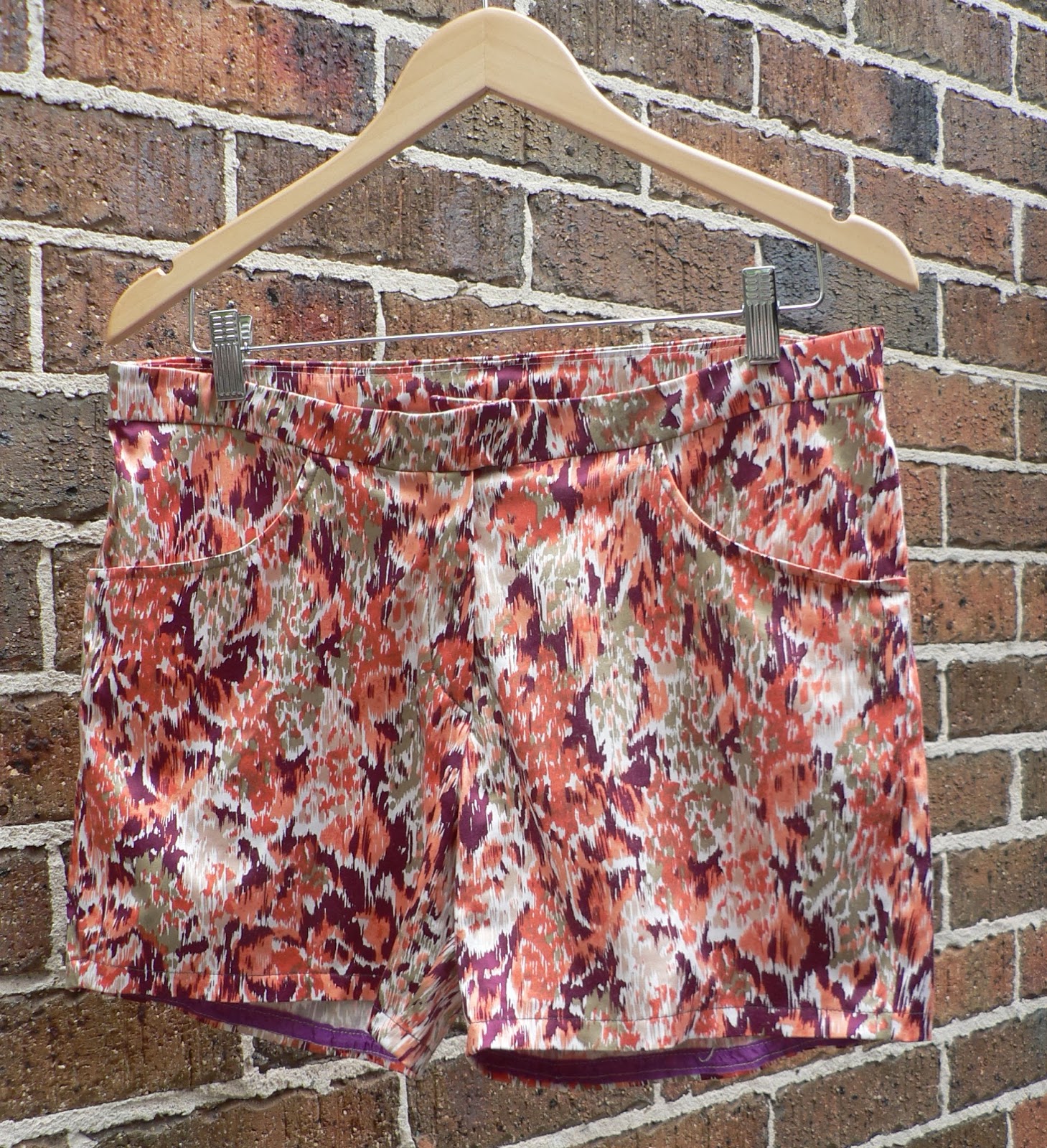 I also lengthened them by about 3cm, as they were pretty much hot pants, and switched the straight rectangular waistband piece for a curved waistband from a Burda pattern (one of my failures, coming up). Because of my sway back and not-insignificant backside I find that a curved waistband suits me a lot more - I tend to get less gapage with a curved waistband. They fit quite well straight off the pattern, particular the rise, which is the biggest win for me - there's no shortage of other trouser patterns in the mags I have. They are very fitting, and short, which is why I'm not modelling them - I just didn't feel up for expanses of white leg today. But I have worn them quite a bit (the crazy print looks good with navy), and whilst I doubt I'll make the pattern up again as shorts (I just don't like shorts that are that tight around my legs) I'll definitely consider the longer length for trousers. I think maybe next time I'd just do inseam pockets though, as the curve is a little gapey (undoubtedly my drafting 'skills').

In decreasing order of failure-ness was an attempt at Burda Lace Shorts 04/2013. 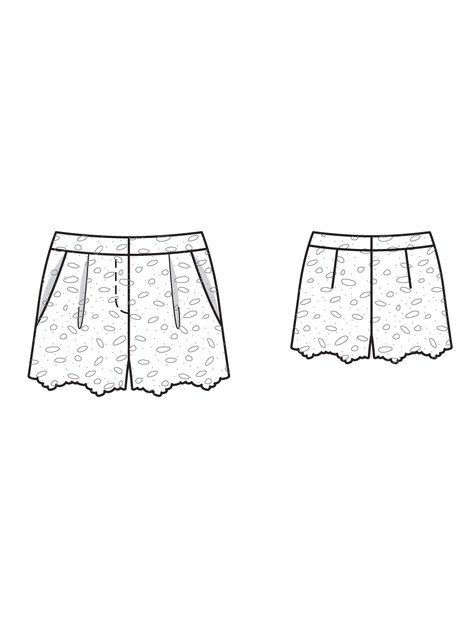 Fail fail fail. These reached a rare spot in my sewing room - the bin. I was pretty cranky with myself too, as I'd used some nice stretch denim (I was short on time, and took the risk). The fly was diabolical - I tried to draft a fly shield, with some success, but the whole thing was just nasty. The pleats sucked. The rise sucked. The only decent thing about them was I was able to scavenge the waistband pattern and use it on the Ottobre shorts.

I had such high hopes for these. I've decided to share with you the vision of my almost finished shorts (oh how it shits me to essentially finish a garment except for the hem and only find out at that point that it sucks). I still love the idea and the look of them on the hanger, but on me they are truly awful. 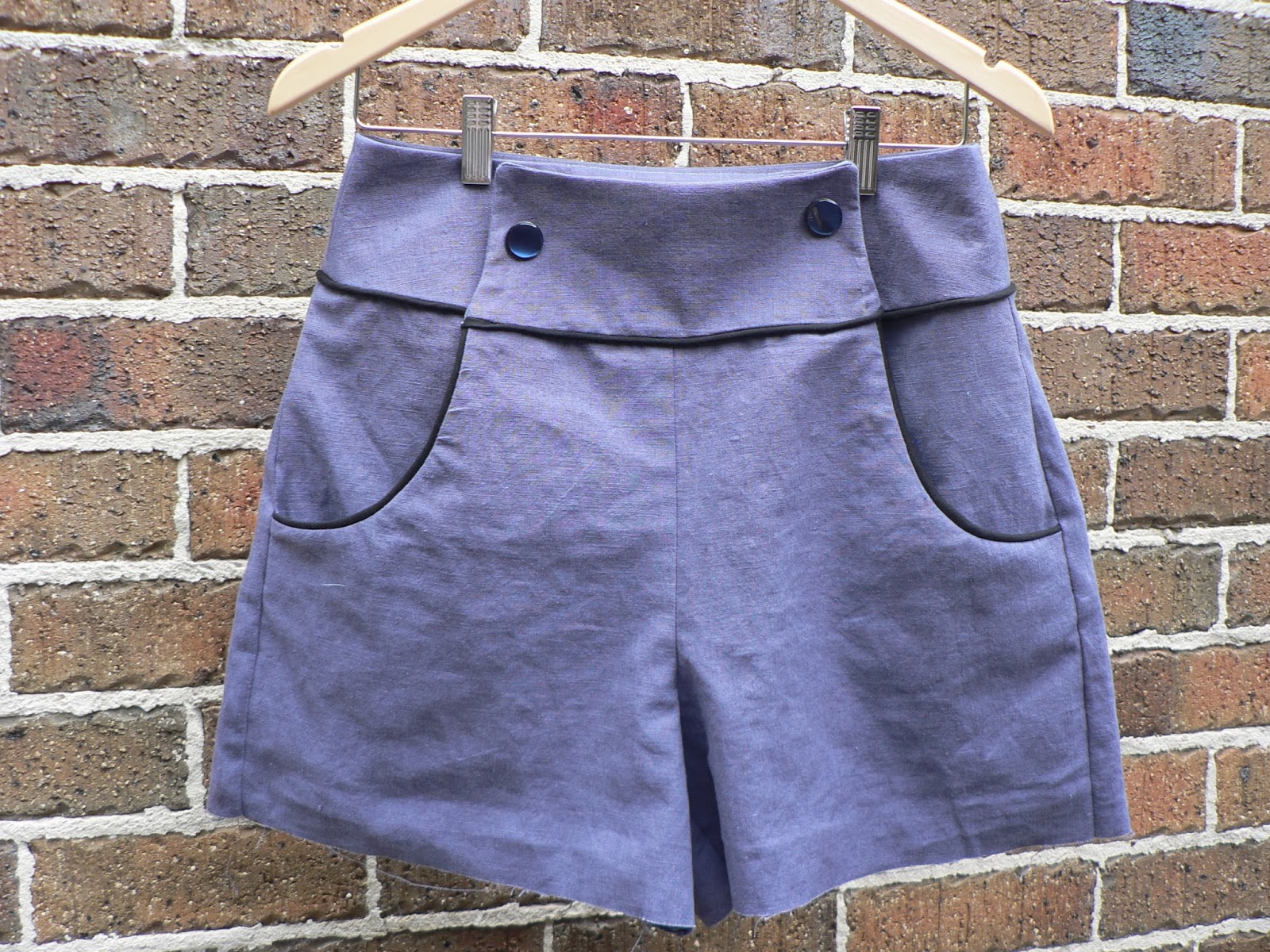 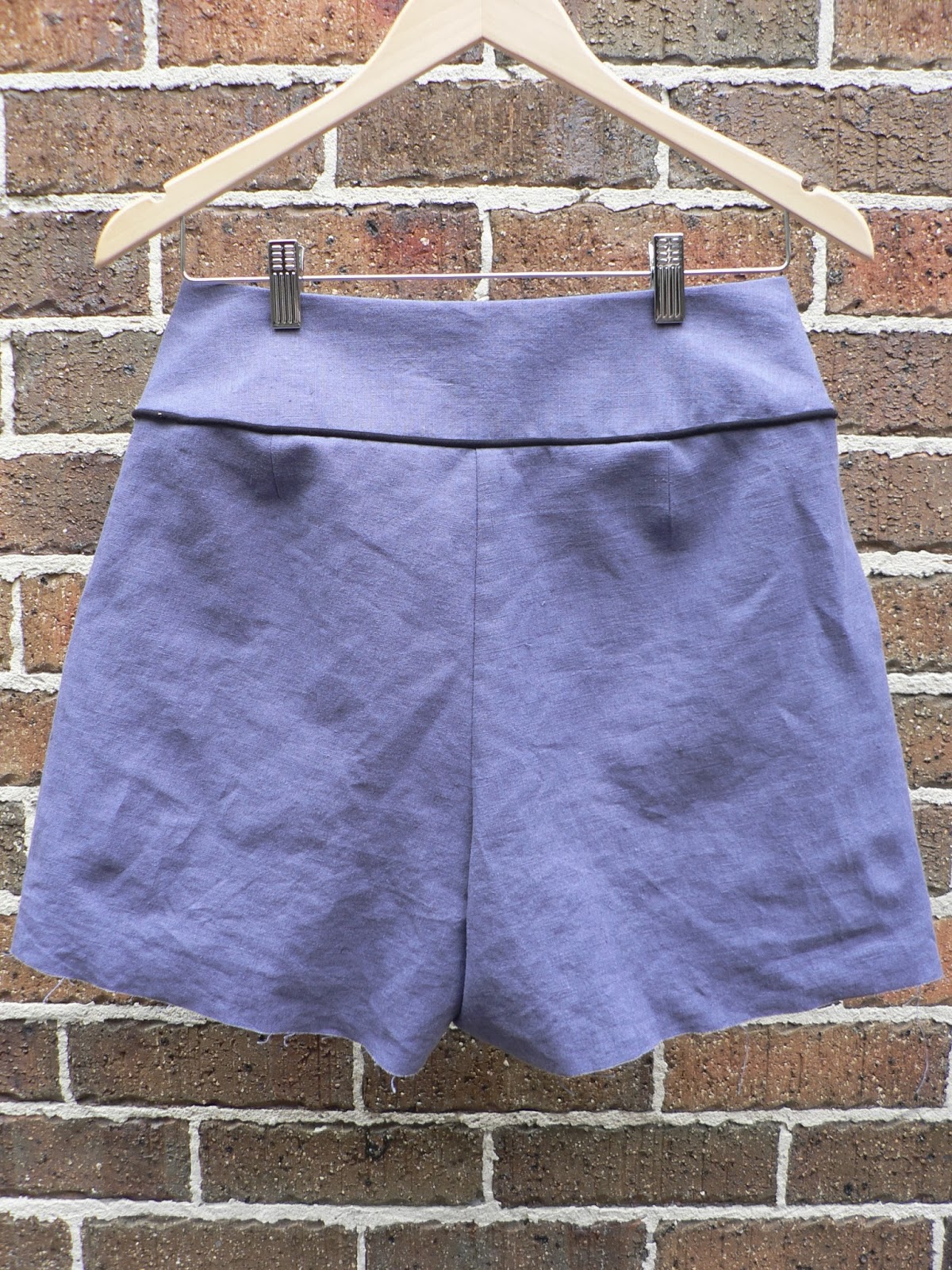 Linen. French seamed. PIPED. I've only pinned the buttons on, hence the wobbliness. I had visions of gorgeous cornflower blue linen (from an op shop, so let's be thankful for small mercies) with black piping, black buttons. At least I got to practice my piping skills (major lesson learned - try avoid a bulky fabric). I cut a size medium, based on the measurements, but because I fell in between a small and medium I decided to do 6/8 inch side and crotch seams, rather than 5/8 inch. I ended up taking in the waistband and upper leg side seams an extra probably half inch, so the small probably would have been fine. These shorts are proper sailor shorts, in that the closure is the front bib, with buttons. That bib section on me - ghastly.

They may have resembled this: 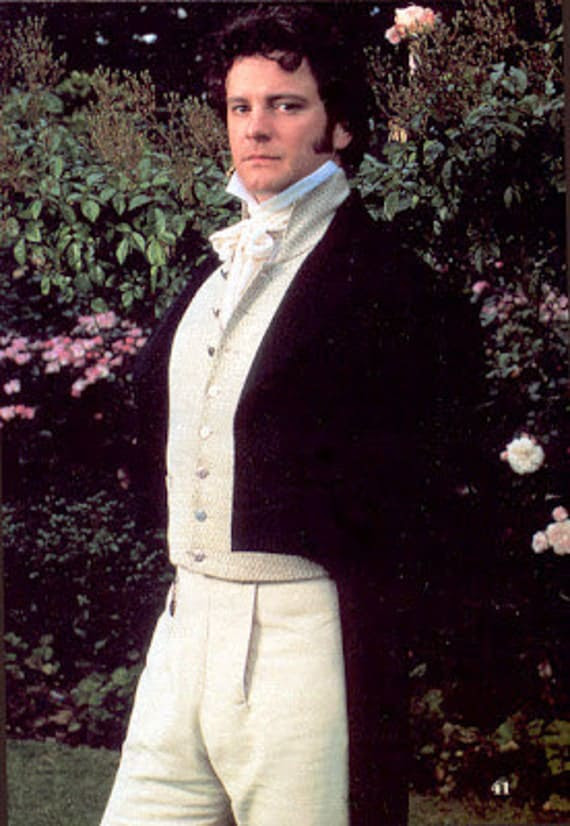 What's a girl to do. Make a stripy dolman tee I think. Sigh.