A little more on the red Beignet

I wrote yesterday's post pretty quickly, and glossed over a lot of the technical nitty gritty with making my Beignet. I did take some pictures along the way of how I did my buttonholes, because that is definitely the Achilles heel of my old Husky (bless her she's older than me - she does ok!). 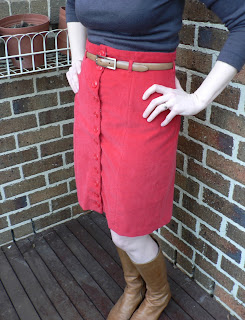 So firstly to the fabric - obviously the shell was a fine corduroy. I hadn't sewn with cord before - I have a few cord RTW trousers which I love - its a beautiful warm fabric that seems to wear quite well. It was also the first time I had sewn with something that had a nap or direction - I was careful to cut my pieces with the nap running down the skirt. With cord you also have to take care with pressing - if you press the soft wale side you can crush the nap, and you can mark the fabric if you iron over seams etc.

The pattern asks for a huge quantity of fabric for a couple of reasons - it goes from size 0 to 18 (I think) and recommends the same amount of fabric for every size, and also it says to cut the facings from the same fabric as the shell. I had already read a few other seamstresses reviews of the pattern and knew straight away I would not be using cord for the facings because of the bulk, and because I wanted a pretty contrast inside! So I was lucky enough to just get away with one width of my fabric for the entire shell - my cord was 150cm wide, and my pieces just fit on, all running in the same direction - so I used less than a metre of fabric! My suggestion is to cut/trace all the paper pattern first, and if you are buying a special fabric take the pieces to the shop with you so you don't waste fabric! The facings and lining I already had in my stash - I'd definitely recommend using something a little slinky for the lining.


I was fortunate enough to have my waist and hip measurements exactly match the size 6, so yay - no grading up or down for me! It fit very well. The good thing about this skirt is that the buttons are added last, so the fit can be manipulated a wee bit but if you want to be sure I would take the time to make a really fast muslin of the shell - I constructed my shell first and pinned it on to be sure it was ok (I had bought my cord at a bargain price so wasn't too precious about it if I had to cut some more). There's just too much work in this item to be disappointed by a poor fit at the end. The other thing to be aware of is that the length of this skirt is predetermined from the start - so check the finished length on your muslin if you are petite or extra tall - as you can see it finishes just above the knee on me! The pattern is beautifully designed but there are an awful lot of pieces - don't plan to rush through it! I did in stages so I didn't get in a funk over it. This is the only garment I've ever made that I wished I had an overlocker/serger - the cord doesn't exactly fray but its edges do need finishing. Because it is quite bulky I ended up clean finishing the edges by turning each seam allowance under separately and stitching it down. I also french seamed each lining seam. This meant that I sewed and finished 18 seams on the shell and 12 on the lining! An overlocker would have been lovely!

My rayon lining frayed like a fiend, so rather than following the instructions for easing it into the curved part of the facing (which say to trim it right back to a very small seam allowance) I eased it in with a line of basting stitches, a bit like a sleeve - this technique I read about on the Savory Stitches blog (where coincidentally her Beignet was also cord!) - it meant my rayon wouldn't fray into oblivion. It worked very well!

I'm not super happy with my bottom corners of the skirt - the cord is very bulky and despite grading seams like crazy there's still a bit of bulk going on down there but there's not much I can do about it! Initially I was in denial about doing a handsewn hem (NEVER done that before) but after a machine hem that looked crapola I sat in front of the TV for a couple of nights and did an invisible hem and was might pleased with it! Because of the bulk of the cord I also made my belt loops differently - I just cut 3 longer pieces, folded the edges in and top stitched - others with bulky fabric have done the same.

Now, the buttonholes. I must admit I considered cheating a little and doing fewer, but I really think a huge part of the charm of this skirt is all of those little buttons. A while ago I read a Threads article on how to make the nicest button holes (check it out here) and ever since then my buttonholes have been a lot better. As I mentioned before my machine is awesome but pretty old, and for some reason it's a bit unpredictable with buttonholes. The main issue seems to be that the feed dogs sometimes don't move the fabric which means stitches build up and a hump is created and I have to unpick and start all over again. Since using the water soluble gel stabiliser this is far better - the fabric doesn't get sucked into the feed dogs, and I think it makes the garment glide over and stick less. The other awesome thing I found out during this make, is that you can draw all over the gel stabiliser making it so much easier if you don't have an automatic buttonhole function (ie if you have to manually decide where you want the buttonhole to finish each time). I have a tendency to have slightly uneven buttonholes, but even worse I think I focus so much on trying to make sure the garment doesn't stick in the feed dogs that I have a tendency to sew the button holes a little crooked - not cool!

So this time I transferred the pattern markings to the gel stabiliser exactly: 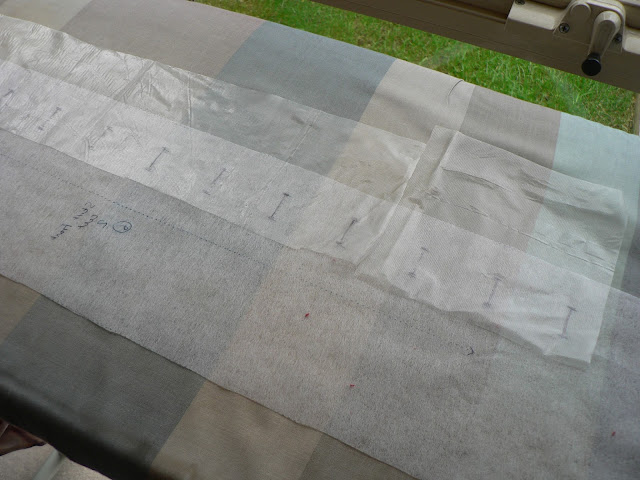 Pinned the stabiliser in one big piece to the skirt (it wraps around to the back of the placket too so the needle sews through a sandwich of stabiliser with the fabric in the middle): 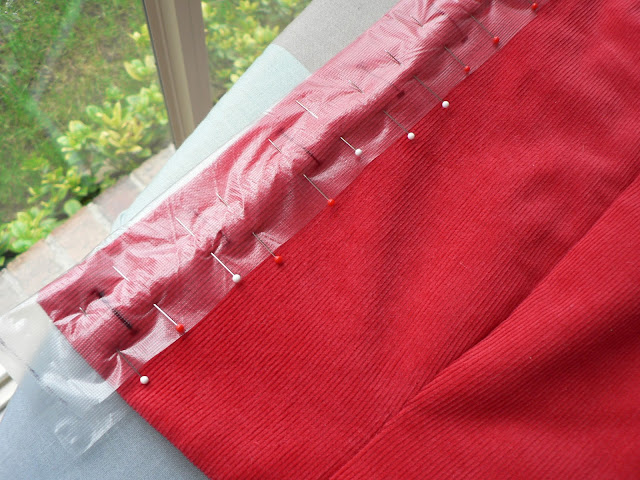 And then just before I started sewing each buttonhole I drew a line with a marker along my presser foot and this was my sewing guide - simple! 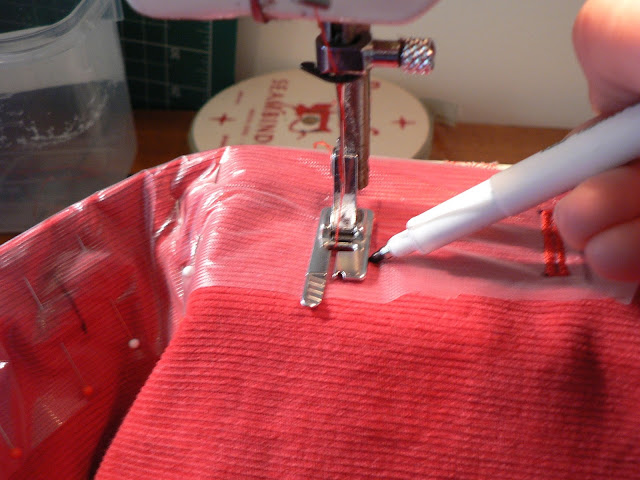 The stabiliser just tears away - there is plenty of room in between the button holes to use for future makes. This stuff is really cheap - and an absolute life saver!

So thats the extended story of my Beignet. It's now the start of spring here, so I wont get a huge amount of wear from it, but I am already planning an unlined summer version - I have a vision of an emerald green Beignet - Rathdowne Remnants has an amazing range of silk-linen in beautiful colours..... mmmmm silk-linen!

Don't forget to enter my giveaway - one week to go. My husband wanted to choose the winner but I suggested we let the cat.....sad I know.