I had a big birthday late last year - I turned 40! I love my birthday. In fact for many years it has become known amongst my friends and family as The Festival, and can last a couple of weeks. But this year was a bit different, because it was my first birthday with my little love in our lives. And I was tired. Still am. But last September/October I was bone tired. I had little enthusiasm to do anything spectacular. Don’t get me wrong, I wanted to do something, but I wanted someone else to organise it, arrange it, execute it, clean up and still guarantee I would be only 30 steps from my bed when I was ready to pass out at 9pm.

And so it was that we organised a very low key afternoon party at our house. We had it catered with a spectacularly beautiful grazing table, my extended family and friends pitched in to clean up afterwards and I was in bed and asleep by 10.30pm.


But what to wear?! A girl needs a special frock or outfit on her 40th, and being time poor and needing flexible sizing I took myself off to The Cloth Shop in Ivanhoe where I was confident that Kim would have something fabulous in her back room of knit fabrics. She didn’t let me down. I left with a couple of metres of sequinned viscose Lycra knit, with sequins small enough that I could sew over, in a most fabulous geometric design.


After much deliberation I elected to be fabulous and decided that just because I was bone tired and having my birthday party in a suburban backyard on a Saturday afternoon, that was no excuse to not look or feel spectacular. I also had Frocktails Melbourne coming up a few weeks later, so my cost-per-wear both in dollars and invested time was going to be pretty good from the outset. 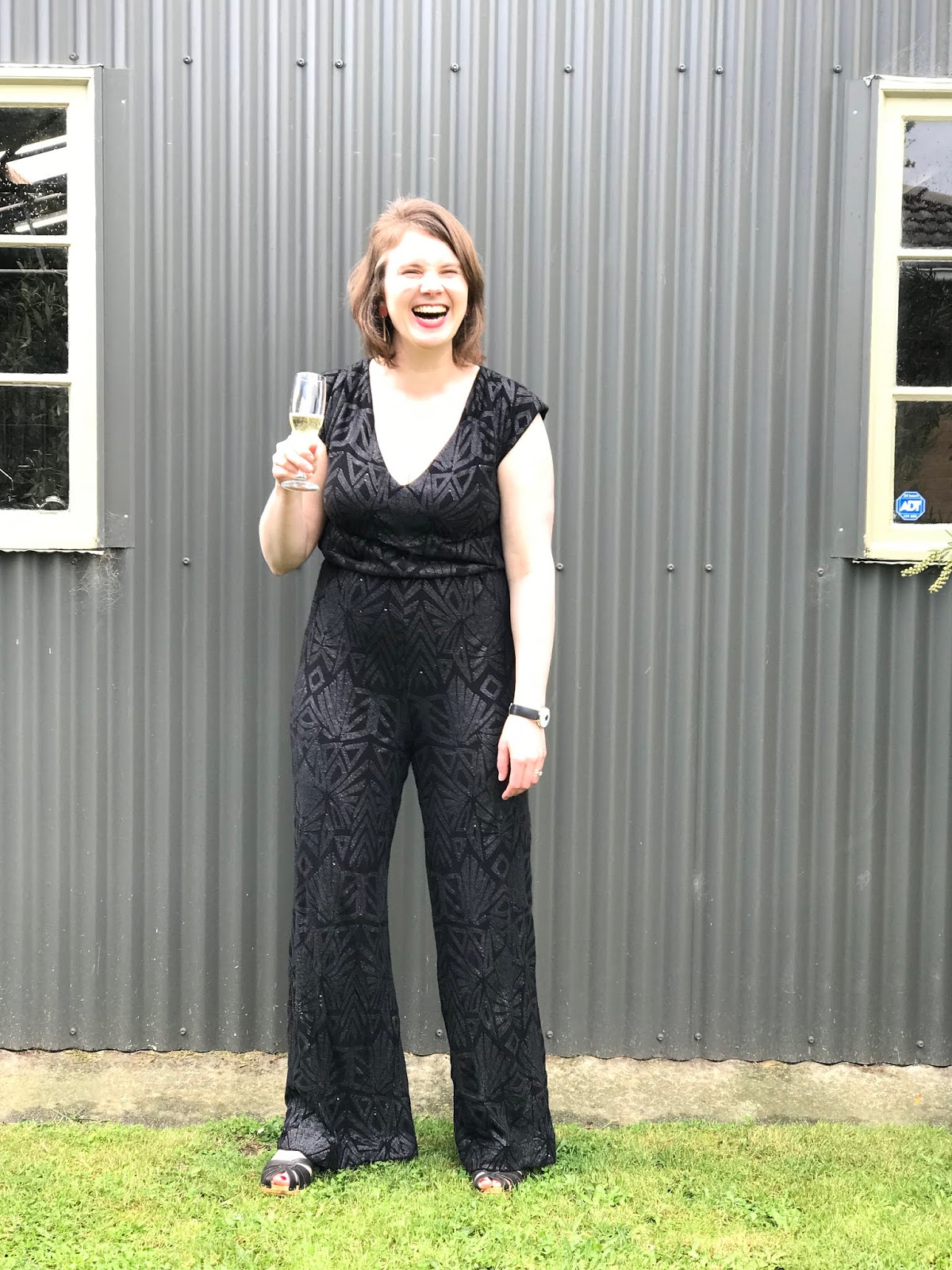 I made the Sallie jumpsuit, from Closet Case Patterns.


The Sallie has a dress and jumpsuit options. The bodice is fully lined, has an elasticated waist and is great if you want a garment that will span some body size variation. The lining is cleverly drafted to be a wee bit shorter than the outer, to reduce the likelihood of it peeking out. I made a size 14 using the cap sleeve bodice. The only alteration I made was a forward shoulder adjustment. The front and back pieces are actually identical, so this meant I needed to trace off an extra version to be able to alter both. I didn’t bother altering the lining. I also left off the pockets, as I wasn’t up for pattern matching and was dubious about how they’d sit. 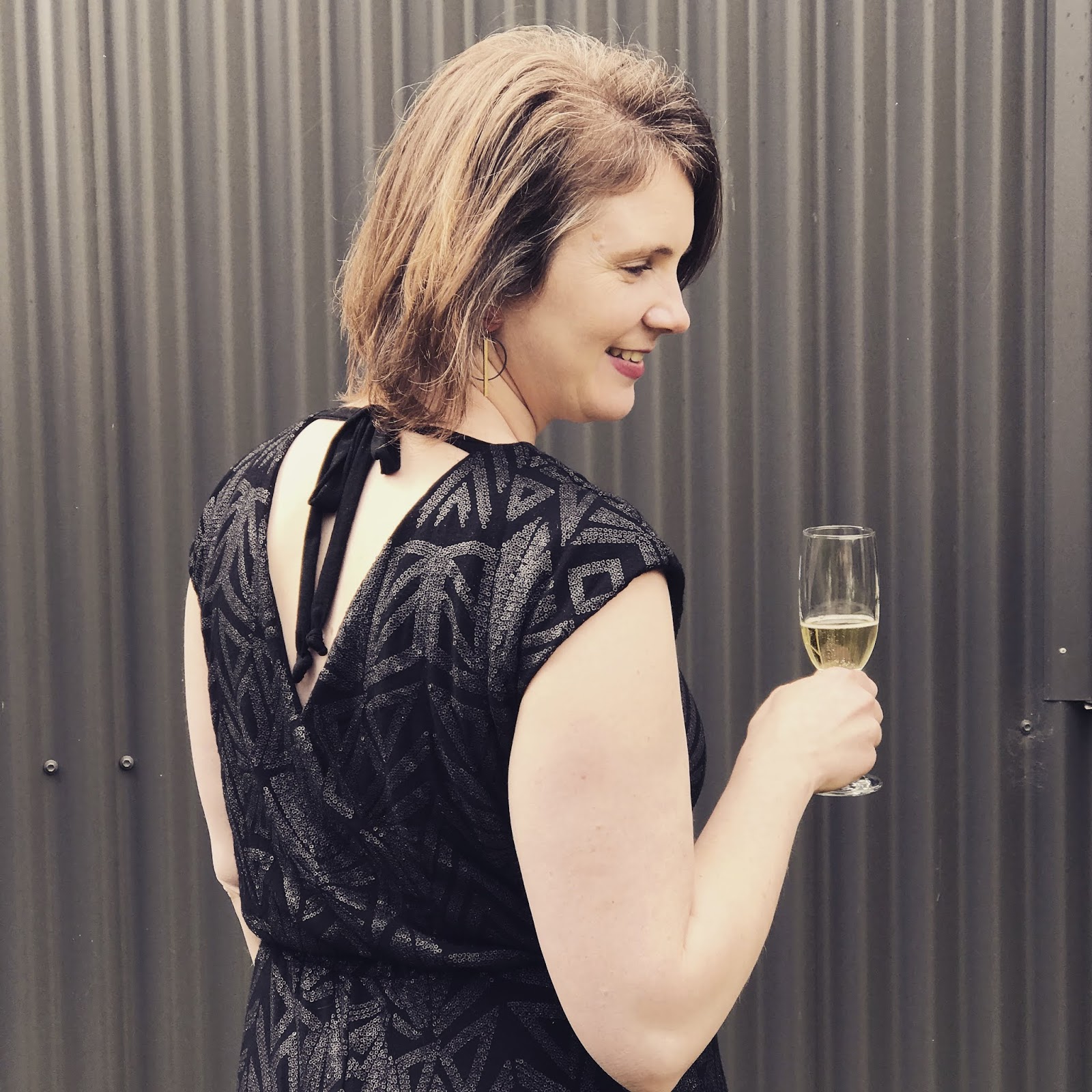 The bodice is lined in a solid black bamboo jersey that was fortuitously in my stash, and the ties were made from the same jersey. The fabric was extremely easy to sew with. For a fairly high pressure garment it all came together very well. 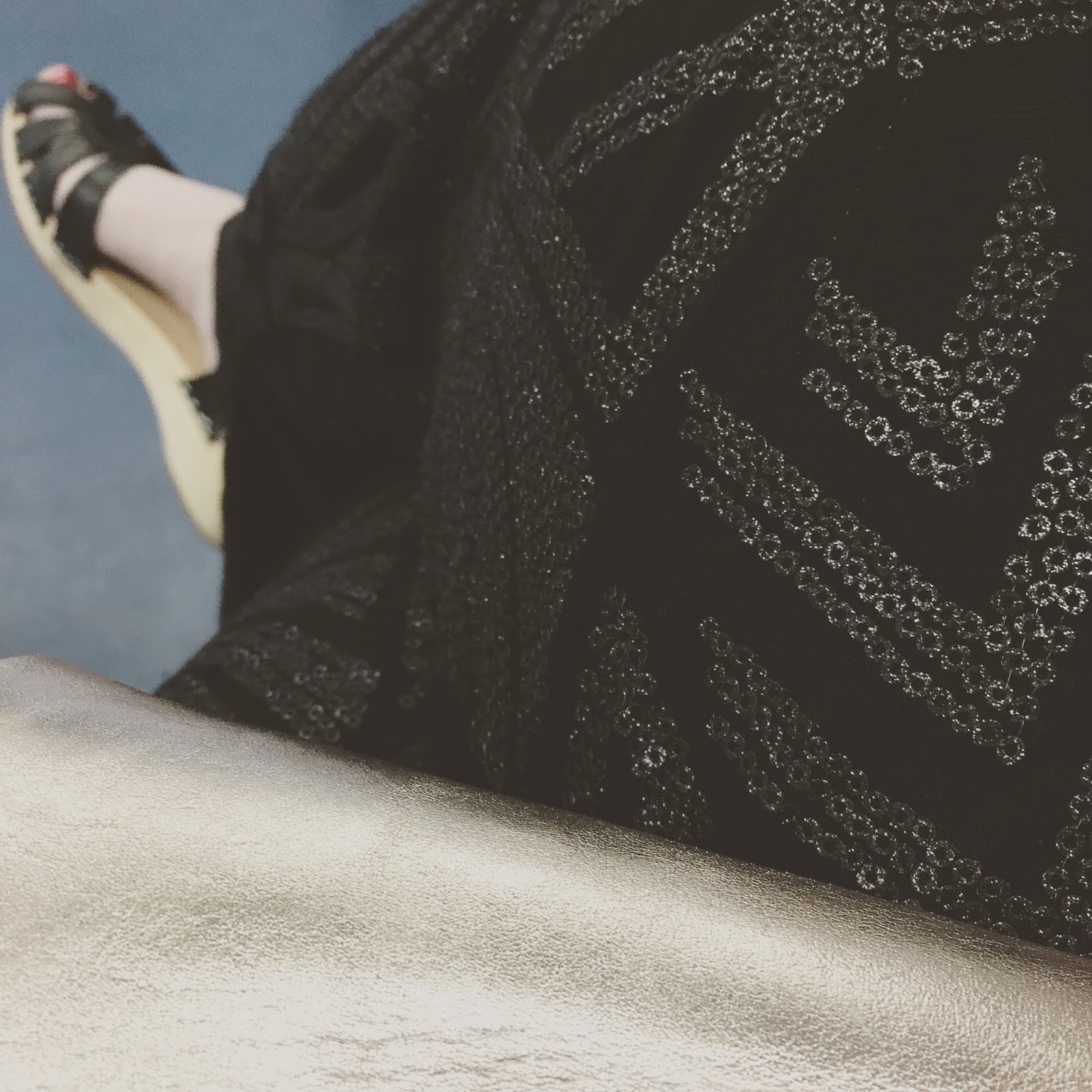 I loved wearing it both at my party and at Frocktails. Such a fun garment.


But I wasn’t finished with Sallie yet. I admit to having some FOMO this summer and last, when the babe was a newborn, over strappy camisoles and camisole dresses. I made some Ogdens (unblogged) just before becoming pregnant, and there was no way I was fitting into them whilst breastfeeding. And I’m too lazy to invest time and effort in learning to FBA a woven camisole that I’ll only be wearing for a few more months. But a knit camisole dress would given me some options. After the success of the cap sleeved bodice I ordered some beautiful teal (whoohoo navy overlocker thread!) Lillestoff modal knit from Wattlehill Fabrics and started the tank version, with a midi skirt instead of a maxi. 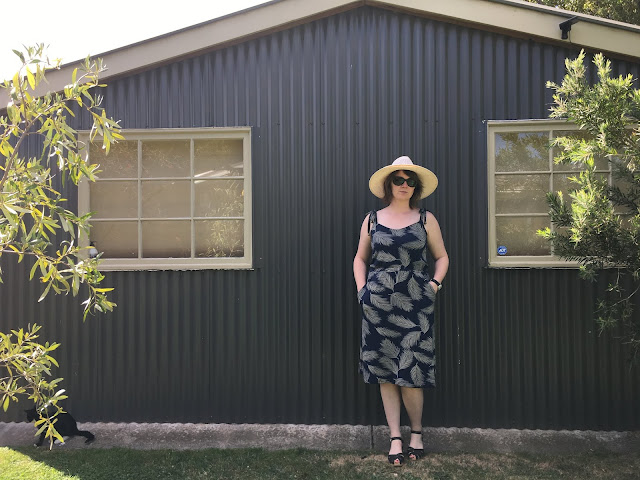 I’m not as thrilled with this version as I was with the sequinned extravaganza. The fabric is a lot drapier, and despite stabilising it, there is a little bit of droop at the neckline. It’s worse if I wear a strapless bra (yes, strapless nursing bras exist! They are as shit as regular strapless bras. But with holes in them) so I’ve accepted that I’d rather less neckline droop with some chunky bra strap visibility courtesy of a more supportive bra. The ties do help to hide the bra straps a little. And I added the pockets. The bloody pockets. They’re terrible - flaccid, limp and disappointing. Don’t ever let me make pockets in a drapey knit garment ever again. Aside from this I do think it’s pretty, and it’s lovely to wear on a hot day. 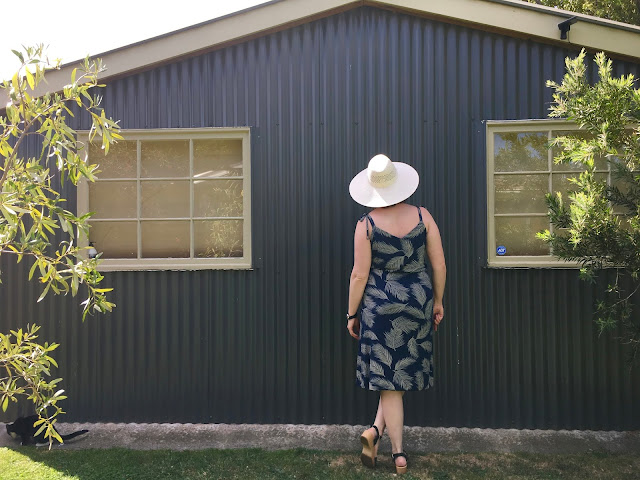 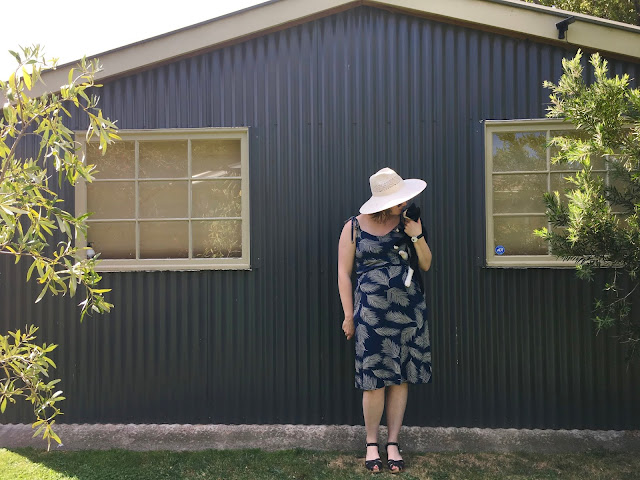 My final Sallie for this summer is a tank top. The neckline is quite similar to the Ogden, and I was so pleased with the fit of the dress bodice that I felt it was worthwhile experimenting with a knit camisole top. I extended the length of the bodice and drafted a facing off the lining, similar to the Ogden design. The straps are at a fixed length. 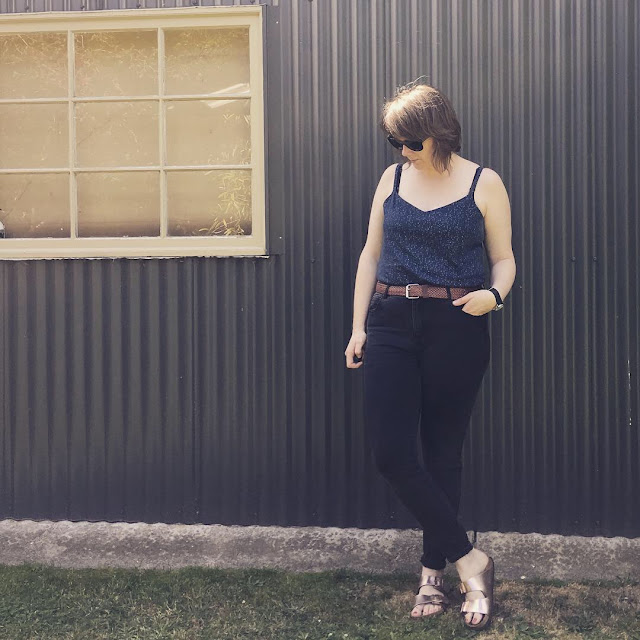 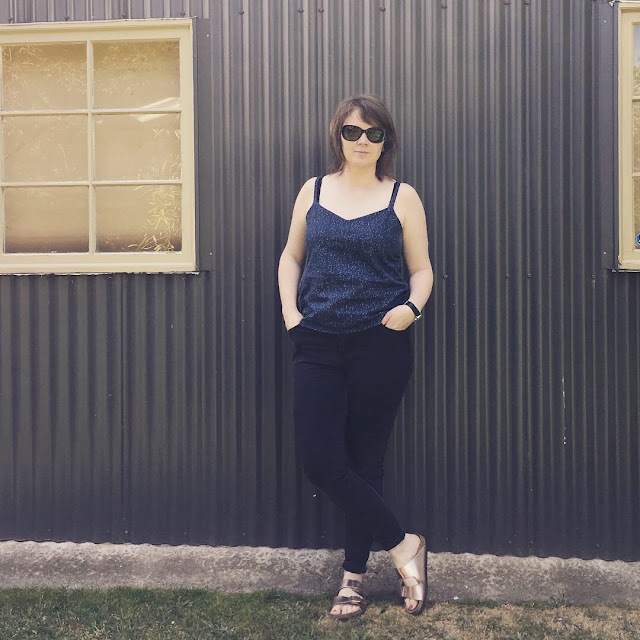 The (navy!!!) fabric is a cheapie cotton knit from Spotlight, with very little recovery. For an experiment it’s pretty wearable - little neckline gaping but a little bit of underarm gaping, due to the lack of Lycra. It’s just a smidge short, so the hem allowance isn’t as generous as I’d like but otherwise it gets two thumbs up from me. I like it out, I like it tucked too. 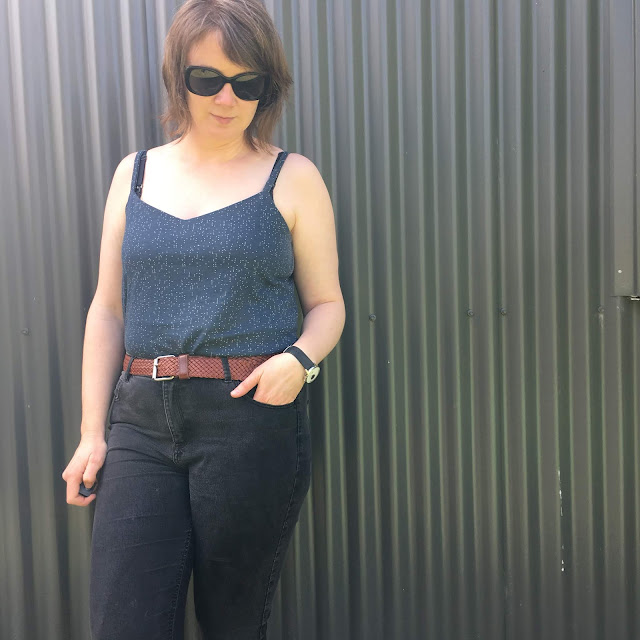 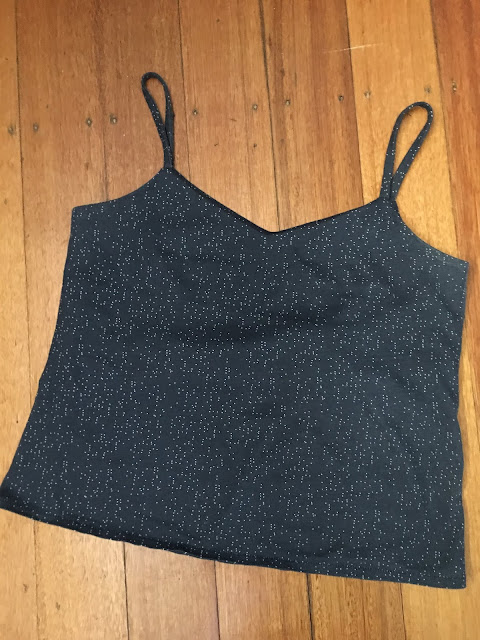 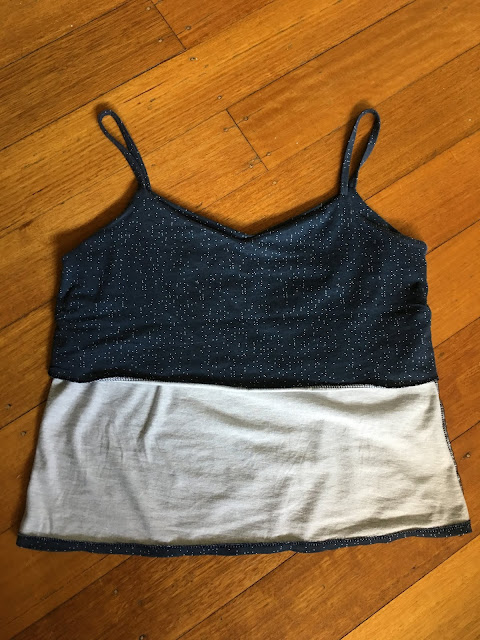