The reality is that I really don't think sewing saves me an awful lot of money. I'm sure if one had iron-clad willpower and only bought WHAT ONE NEEDED PER PROJECT (I shout because of course the notion is for me ridiculous), instead of allowing oneself to accumulate curate a marvellous fabric collection then things might be different. But when it comes to making a silk maxi frock, then it's a bit different. A super quick squizz at Shopstyle with 'silk maxi' brings up an endless array of pretties, starting at about $300 AUD and peaking at $16000! That is Sixteen Thousand Dollars my friends.  Oh how that makes me laugh - see?!! 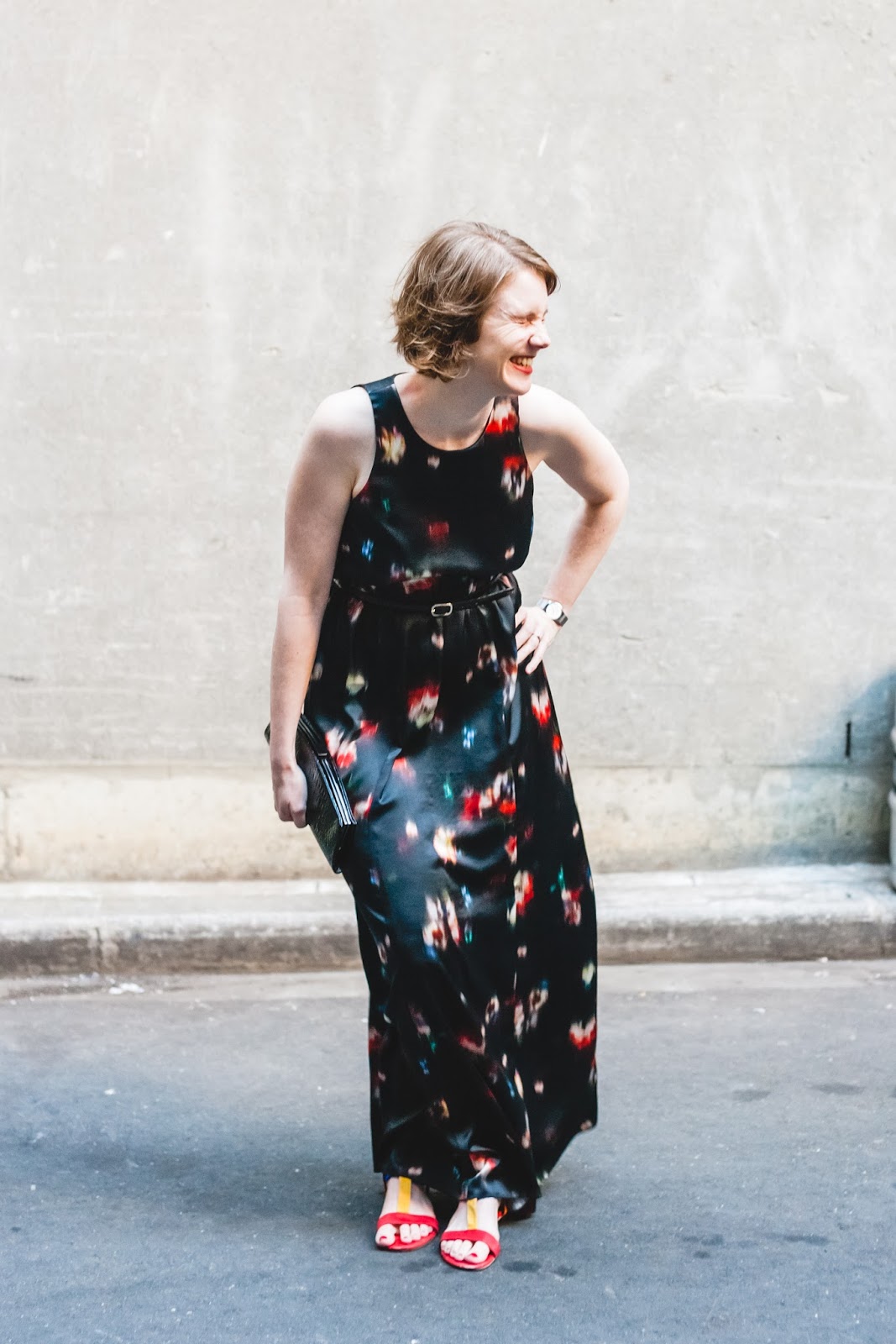 Anyway I adored this silk-spandex the moment I saw it on the Joys Fabric website, and after seeing/pawing it For Reals I knew some of it was coming home with me. I knew it would become my Frocktail dress, but the pattern was yet to reveal itself to me. At a very civilised $30ish/m I grabbed 2 metres and stroked it for several weeks (it's also at Darn Cheap in Heidelberg if you also wish to stroke it).

After a while I decided a maxi was the way to go and considered the Sewawholic Saltspring but I didn't like the idea of shoestring straps. After the success of my first Ruby I decided that was the neckline I wanted. Alterations were both minimal and improvisational in nature. The Ruby is quite A-line so I straightened the side seams a little, raised the armholes and added some seam allowance to the neckline and armholes so I could draft a facing and clean finish it all. I used this Salme tutorial and this Kitschy Coo tutorial plus some encouraging from Lara via Instagram to get a rather nice clean finish. 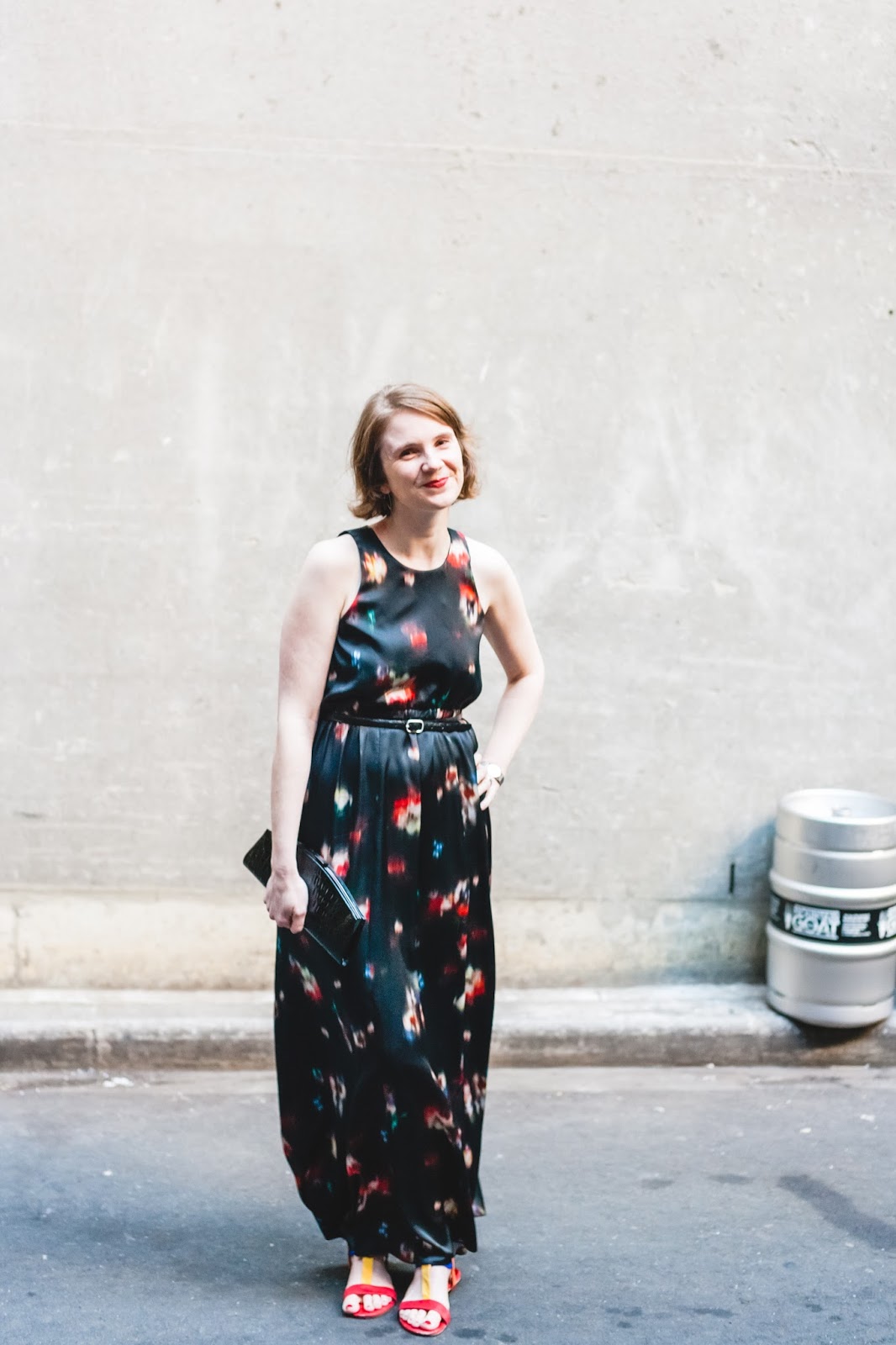 The skirt is the same pattern as this skirt extended to floor length - a vintage gored lightly gathered A-line. I left the pockets out and used my overlocker to do a super quick rolled hem. Very easy. No stress. I even finished the thing with 2 DAYS TO SPARE! Crikey!

Sewing with silk can be a bit of a challenge depending on the type, but I've had good luck. To be honest I don't tend to faff around cutting it between layers of paper. I just do it on my carpet floor, which helps keep things fixed, and cut in one layer. This fabric was a delight to sew with and gave me no grief. I'm tempted to go and buy more for a top...... (see first paragraph, second sentence). 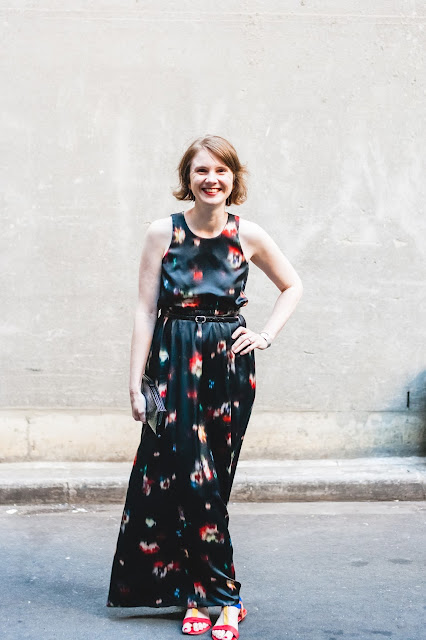 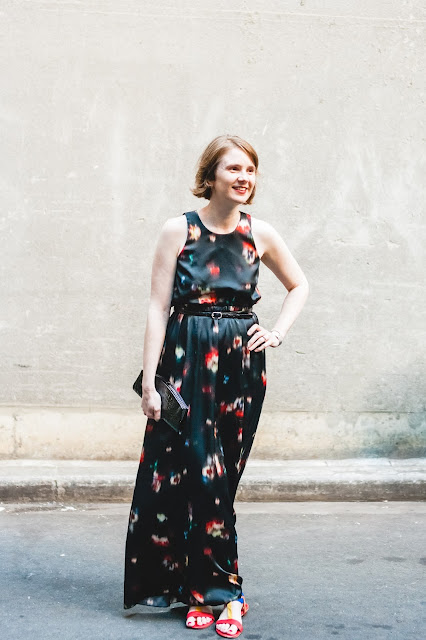 Ultimately I am truly delighted with this dress, but there are a couple of things I would do differently next time. I cropped the Ruby pattern straight across at the waistline, instead of following the curve. This meant that the centre front is pulled up just a bit by my bust - because the top has no darts the ease for the bust comes from the curved hem. Next time I'd follow that curved line.  When I made the facing I finished the raw edge with my overlocker, and unfortunately the outline of edge the facing was sometimes visible through the fabric - I don't know what to do to prevent that. Maybe not use a facing and finish with bias binding.... My belt sometimes didn't sit right on the waist - I needed extra belt loops to keep it and that annoyed me - a lot - such a simple thing! And finally I neglected to make the circumference of the skirt and bodice the same - the skirt was a little fuller and I had to gather it a little to join them before adding the elastic waist band and it just lacked finesse.......

But I have myself a lovely silk maxidress for under $60, and despite those little flaws I did feel fabulous on the night. Would you believe this is my first ever maxi? Had I know it would have transformative superpowers, allowing me to swoosh and glide around with chic drama I would have invested in one long ago!

How great are these pics from Louisa Jones photography? Such a great idea to have a professional photographer on the night. The girls did an amazing job organising a great event and it was, as always, a delight to socialise with the sewing world. 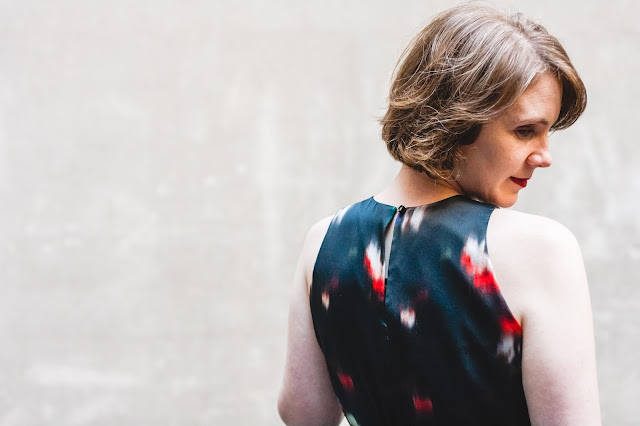