Never one to rush things I've finally fished my Frocktails outfit out of the delicates washing basket to reenact. From these photos it was clear that (a) I needed a haircut (done), and (b) I needed a new bra (yet to be done). Oh well. My photoshop skills are definitely not up for addressing frizzy hair or a saggy bosom. 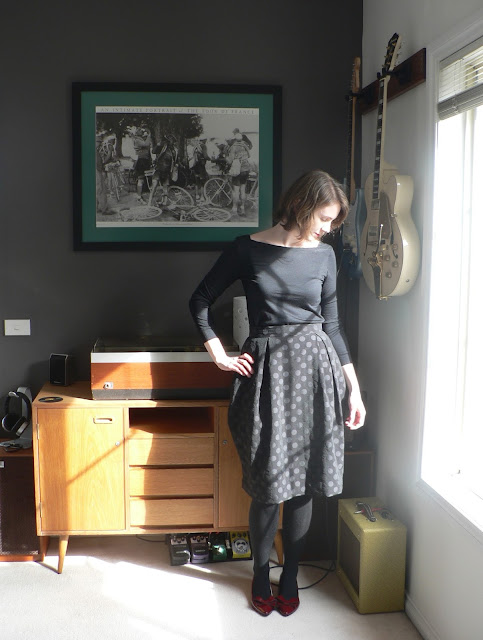 So, Melbourne Frocktails happened about a month ago and I was delighted to get a ticket off the waiting list (thanks Kat and Steph!). Being an absolute cold fish my outfit was planned around being warm and this fabulous Alannah Hill black and navy polkadot fabric I've had stashed for at least a year. It is a mystery fabric - I suspect silk as it didn't enjoy a high heat, but I forgot to do the burn test, so there may well be some poly in there.

I had a skant metre, so a full dress was out of the question. I know part of the point of Frocktails is to have an opportunity to make something super special and extravagant but my practical side couldn't succumb and so separates it was. I wanted it to be all about the skirt, and wanted a skirt with drama. I decided on adapting the Elisalex dress, using only the skirt portion. I used the waistband piece from the Charlotte skirt, and made a straight size 10 with no alterations other than removing an enormous amount off the length (more on that later) and adding a silk lining (FANCY!) because the fabric is a little sheer. 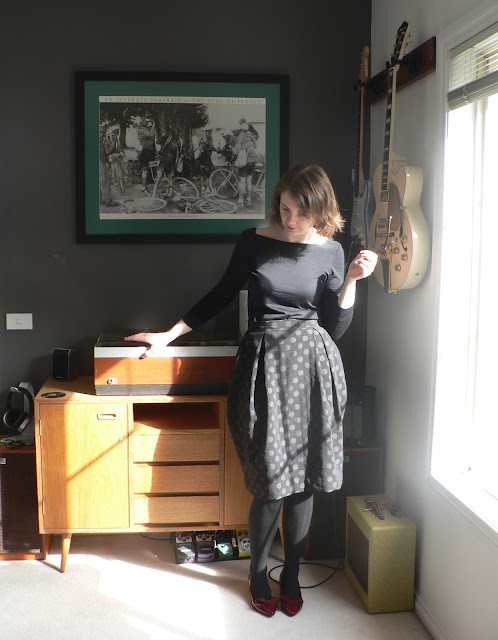 The Elisalex-as-skirt is very easy to fit - the enormous amount of design ease over the hips means you really only need to go with the waist measurement. I thought about adding pockets but was running out of time so left them out. I love the OTT shape and pleats, however was fairly unimpressed with the drafting of the hemline. I made a quick muslin just to make sure the thing wasn't going to look ridiculous, and ended up taking about 30cm off the bottom. The skirt hemline is very pegged, and the instructions merely state to 'hem at desired length'. As mentioned by a couple of others who have made this it is impossible to 'hem at desired length' as drafted because of the shape - you essentially have to redraft the hemline as a mirror image reverse pegged shape to get it to fit. Pretty lazy drafting if you ask me and enough to send an inexperienced sewer into a bit of a panic. Really to get the right length and be able to hem it you either need to make a muslin then redraft the hemline at your preferred length, or draft a hem facing.


I was mighty proud of my first ever invisible hand sewn hem - it took me forever and I bitched and moaned about doing it the whole time but it is beautiful and invisible from both sides. Check. It. Out. 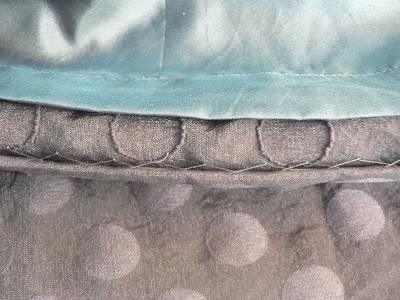 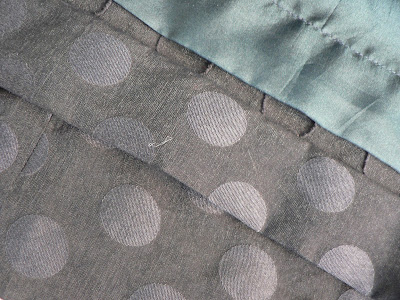 Otherwise I was really happy with the pattern (bearing in mind I didn't go near the bodice) and I'd love to make this up in a more casual fabric for summer and wear it a little shorter as a mini - I have some heavy black Levi's denim that would hold the tulip shape beautifully so that will go on my never ending sewing list.

For the top half I was planning a Nettie bodysuit with a scoop back in a silk-cupro-lycra jersey that I purchased from the Fabric Store. I only wanted the skirt to have drama however the jersey was a shitty, shifty, nasty piece of work, causing my machine to skip stitches and generally being, frankly, quite the pain in the arse. By the time I got to try-on stage it was clear that the fabric was a terrible choice for the pattern and I had to think of a plan B. This was about 4pm, 4 days before the event. Despite the imminent futility I flew through my wardrobe looking for something even vaguely fancy that would match. By 4.30 I knew I had to make something else. There was just enough fabric left over to cut out a new pattern I'd been wanting to make for a while the Knipmode Coco top.

Knipmode are a Dutch pattern company, similar to Burda, in that they are PDF, no seam allowances, and, just to make life fun when under pressure, no instructions in English! Yay! The upside is being able giggle at amusingly unfamiliar words like 'Winklewagon' (cart!). To be fair this is a pretty simple little top, the main detail being fabulous triangular shoulder inserts.  Anyway with a bit of help from Google translate I was able to muddle my way through, and by the time I got to try on time it was again completely clear that this silk-cupro-jersey was truly the Fabric of Evil and there was absolutely no way I was going to have a garment that didn't look like it was made by a 7 year old learning to sew.  It was now 2 days to the event and I was sick. I had in the stash some lovely, fine black merino jersey and decided that being warm and not half-naked was more important so in a last ditch attempt to make something and avoid buying a RTW top I cut out the Coco again. The wool behaved beautifully of course because it is not the Fabric of Evil, and all was going well until I realised after finishing the shoulder gussets, fusing and topstitching down the facings that I had sewn the back on inside out.

Sewing when sick - not ideal.

At that point I truly didn't care - it wasn't that obvious, and I was counting on it being dark AND knowing barely anyone at the event and not being looked at too closely!  In fact I was so over it, it didn't even get hemmed. LAZY! SICK! DON'T CARE! 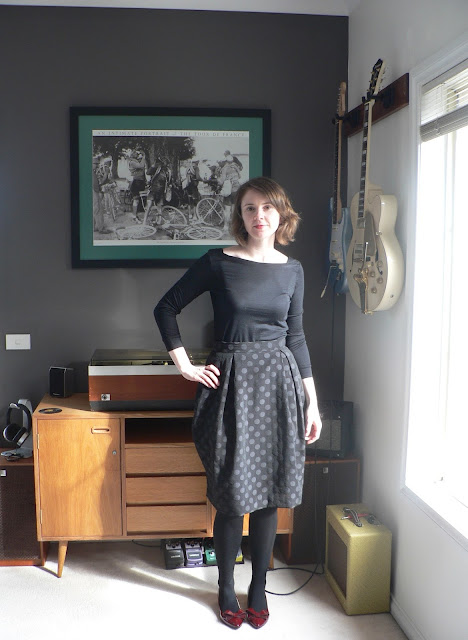 Here's a better look at that lovely neckline: 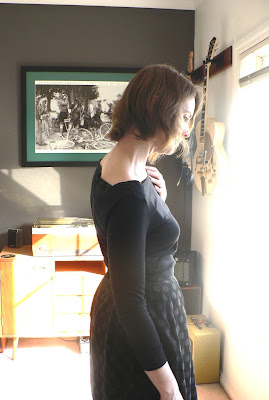 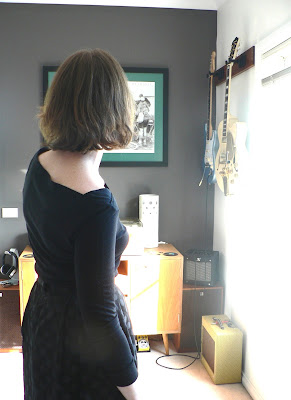 Now. Remember about the instructions only being in Dutch? And no seam allowances? Turns out one shouldn't add seam allowances to the triangles, as you won't get triangles! My points didn't meet up. I should have only added them at the part of the gusset that attaches to the sleeve head. I've trimmed them off the pattern piece at the bottom already but for future reference to self and anyone else who tries this pattern, don't add them at the sides! 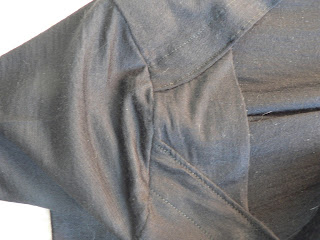 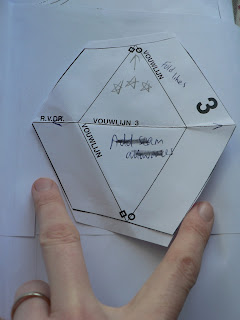 It's well worth having a trawl through the Knipmode patterns (the only annoying thing is that often they're made up in fairly mad fabrics that hide all the style lines). They're cheap and apparently they are drafted for a taller lady, as the Dutch tend to be. I'm 178cm tall (I think that's 5'8'') and I cut the longest length and it was just long enough to have a reasonable hem.

So that's the story of my Frocktails outfit. It was such a fun night - despite knowing very few ladies it was great fun and I was delighted to meet a few familiar faces from the Interwebs. Can't wait to do it again - in warm weather hopefully!

Have you made any Knipmode patterns before? Is there any other language in the world that has a better word for cart than Winklewagon?
Labels: By Hand London Coco top Elisalex Fail Finished projects Knipmode lovely times Sewing with knits Skirts