Worst hair day ever. Thank goodness for hats is all I can say. Anyway here I am sharing one of my current favourite winter outfits, my ohmygoodnessI'minlovewiththisfabric striped wool merino Mandy top (unblogged) that basically gets washed and put right back on my body (fabric from the Cloth Shop in Ivanhoe), and my new cardigan, Simplicity 2560. 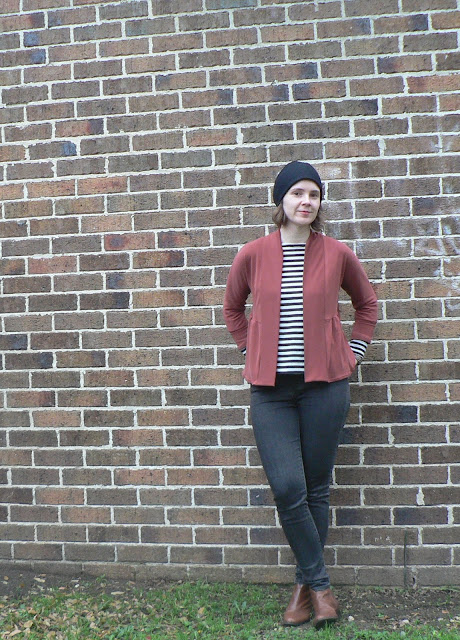 So last year in Me Made May I wrote about cardigan patterns, and I notice that this year that a lot of people still lament the lack of decent sewn cardis in their self made repertoire. Since I wrote that post Muse has released the Jenna cardi, which has received a lot of love, and SBCC has released the Cabernet Cardi. I made up the Style Arc Fiona cardigan, and despite feeling a bit mediocre about it when I first made it, it has become my House Cardigan, and is pretty much my most worn self made garment I think.

Simplicity 2560 is now out of print but there's a few copies for sale out there. I was drawn to it as it was quite similar to a beloved RTW that I still haven't thrown, a very drapey cotton knit cardigan from Target that is still worn in denial of it's impending doom.

Those ruffled sleeves are, quite frankly, foul. But like my RTW version it has some light gathering below the bust, dolman sleeves and a separate neckline piece. I could see through the fugly to the potential. My final cardi is a mashup of a couple of views, sizes and some extra ideas of my own. I chose to make the length of view C, in a size 12 in the upper pieces, and a size 8 in the lower pieces, the smallest size, to reduce the amount of gathering (good lord - it's nearly a peplum!!!) I extended the sleeve length using a Burdastyle dolman sleeve pattern piece. The neck band is meant to be attached as a single layer, and worn bunched up like a scarf with the exposed raw edge hemmed. I didn't really like the idea of this finish, so decided to make it doubled, with the two raw edges hidden on the inside, like a more traditional band. 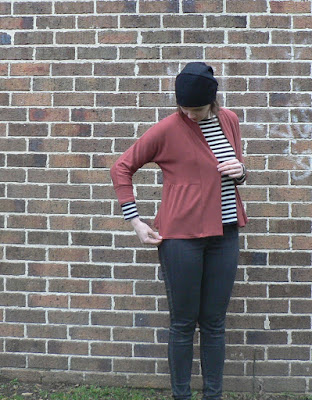 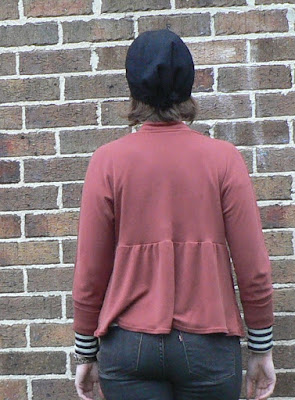 The fabric is quite unique. It is a modal-poly blend from Darn Cheap Fabrics. I actually wanted to make it in a mustard wool jersey but couldn't find what I wanted. I was drawn to this fabric despite it's high synthetic content as it had a lovely hand, but also a very unusual colour. It's a weird pinky-brown colour, and I realised I was so attracted to it as it's so similar to the colour of my wedding dress.  It has a lovely drape despite being a fairly heavy knit. The double layer of the neckband may not have been the best choice but as a wearable toile I'm pretty happy with it. 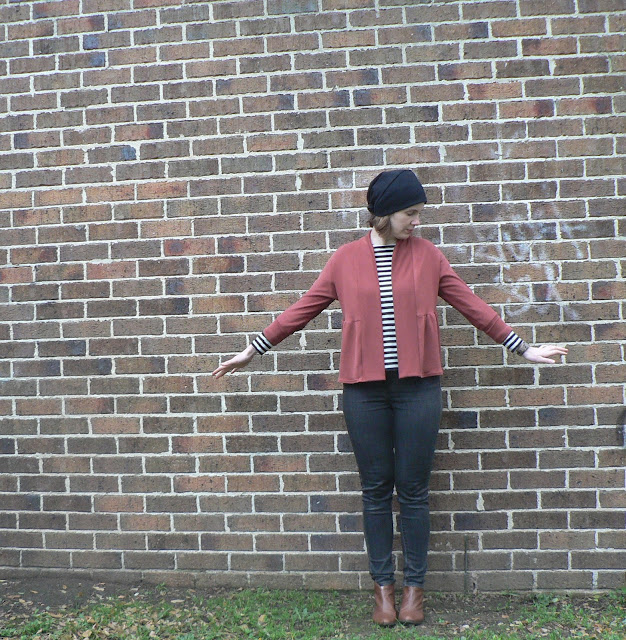 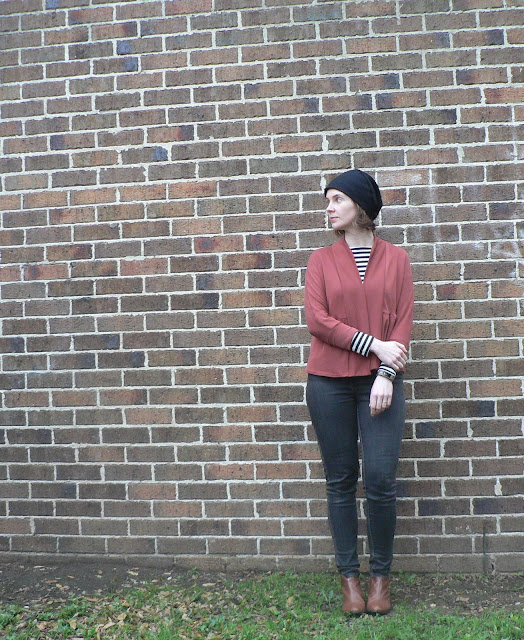 Because of the weird colour I made it all on my sewing machine - matching this to overlocker thread would have been impossible, and with an open cardi I didn't want any mismatching thread to be visible. I ended up binding the neckband seam with some organza ribbon as it does have a tendency to flop open and become exposed, so that at least keeps that raw edge tidy.

The sleeves were initially finished with a twin needle but were a bit floppy and loose at the cuff so I added some snugger long bands instead. I like finishing tops this was it gives me the option to fold them back like this and wear as 7/8 or full length. 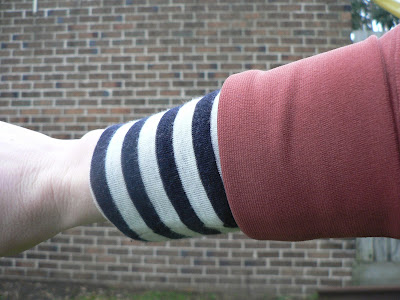 It's not got the flawless finish that I aspiring to, but I've still worn it a bunch, and I think the pattern's worth another crack, in something a fair bit finer like a wool or linen jersey. I'd be tempted to make the neckband as drafted next time, maybe attempting to finish that raw edge with a rolled hem on my overlocker and try removing the gathers for a different look. 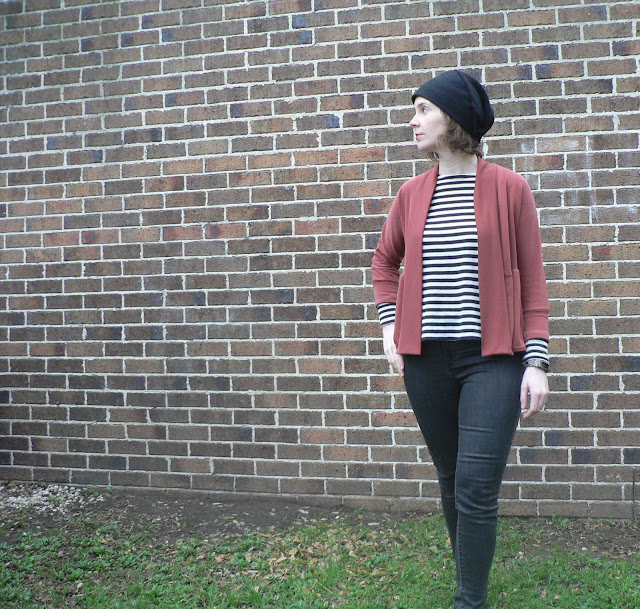 Any other new cardi patterns that I should know about? Is anyone else on the perfect cardi quest or do you prefer to let RTW to do your cardi provision for you? I've another Fiona in planning stages, plus a Named Saunio, a Thread Theory Camas and a McCalls 6708 (also out of print!).