How was your Easter long weekend wherever you were in the world? Mine ended up lovely, but the start was rather shitful. As briefly mentioned in my last post my guy had been working hard to get Sunny all jazzed up for our big holiday of the year, a mega road trip up to Byron Bay Blues Fest, an 18 hour drive north of Melbourne.

We had such high hopes. We were looking forward to a nice slow cruise up north, a few days of camping and awesome music with friends, and an equally slow cruise home. I was determined to tick off a large number Big Things on our road trip (many Australian country towns over the last 4 decades developed a peculiar need to create a large tacky Thing for their town - an exhaustive list can be found here). 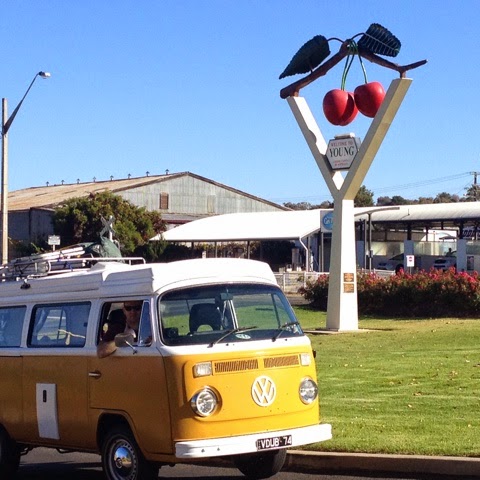 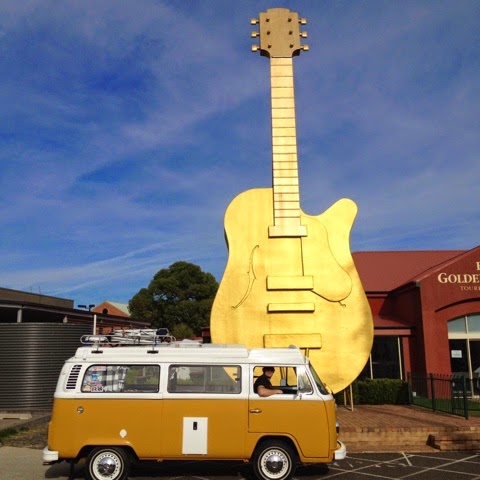 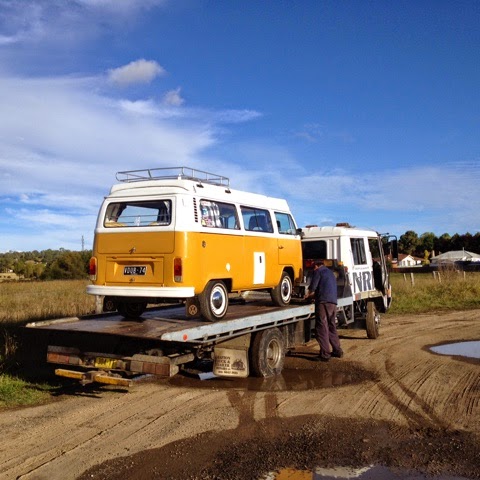 Yep. Sunny couldn't make it, so we didn't make it. After 15 hours of driving we ended up on the side of the road and many conversations with our insurance company later we had to make the call and cancelled our trip. We were gutted. I won't lie - I cried a little. I was so bitterly disappointed for Matt. He'd worked so hard the last few weeks to get things spot on, and in the end couldn't predict the engine issue that developed after 2 days of driving.

But. We had breakdown insurance, our festival tickets were insured and we were able to get home safely. It could have been so much worse. After 5 more hours of driving, 4 hours of sleep and an early Sydney flight we were back in Melbourne by lunch time the next day and on our way to the in-laws beach house in Torquay. After allowing myself one more little sleep deprived cry we have ended up having a lovely relaxing long weekend.

Of course I've knitted like a maniac, and am currently teaching myself combination knitting to take some pressure off my arm. It's hard to explain, but it's a quicker way of knitting in the flat, which is easier on the arms and hands. You purl in a sort of cheats continental way, which creates twisted stitches, then knit into the back of the twisted stitches, also continentally,  which untwists them. Sounds weird but it is so fast and makes a hell of a lot more sense when doing it..... (see here and here for more info).

I'm so glad to be back knitting - and here's a project I finished a couple of weeks ago that was on hiatus during my arm treatment. A couple of years ago I made this jumper. Let's be real. It was crap. Unwearable. Ridiculous neckline, stupid wide sleeves. I didn't wear it once. But the yarn wasn't cheap, and I felt embarrassed to even consider donating the stupid thing to an op shop. So I unravelled it (and because the yarn was made of recycled cotton it's now twice recycled!), and reknitted an alternative stripey, the $5 in Paris pattern, a free top down yoke jumper knitted in the round. It was a fast knit, using 10ply on 5mm needles. I lashed out and bought myself a fabulous pair of Knit Pro interchangeable needles, and my word were they fast! I call them my Ferrari needles, and I am now utterly converted to using good quality super shiny metal circular needles. 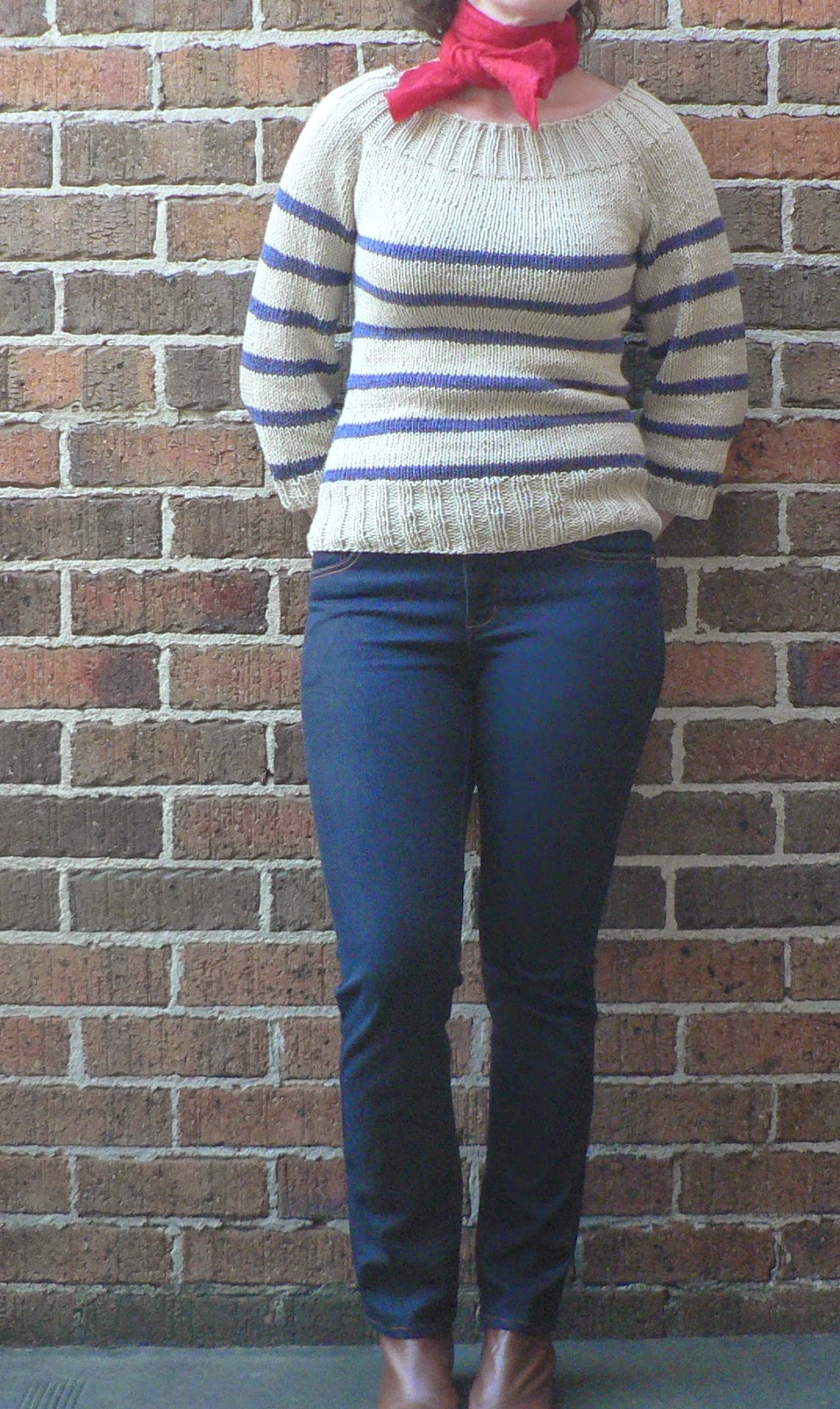 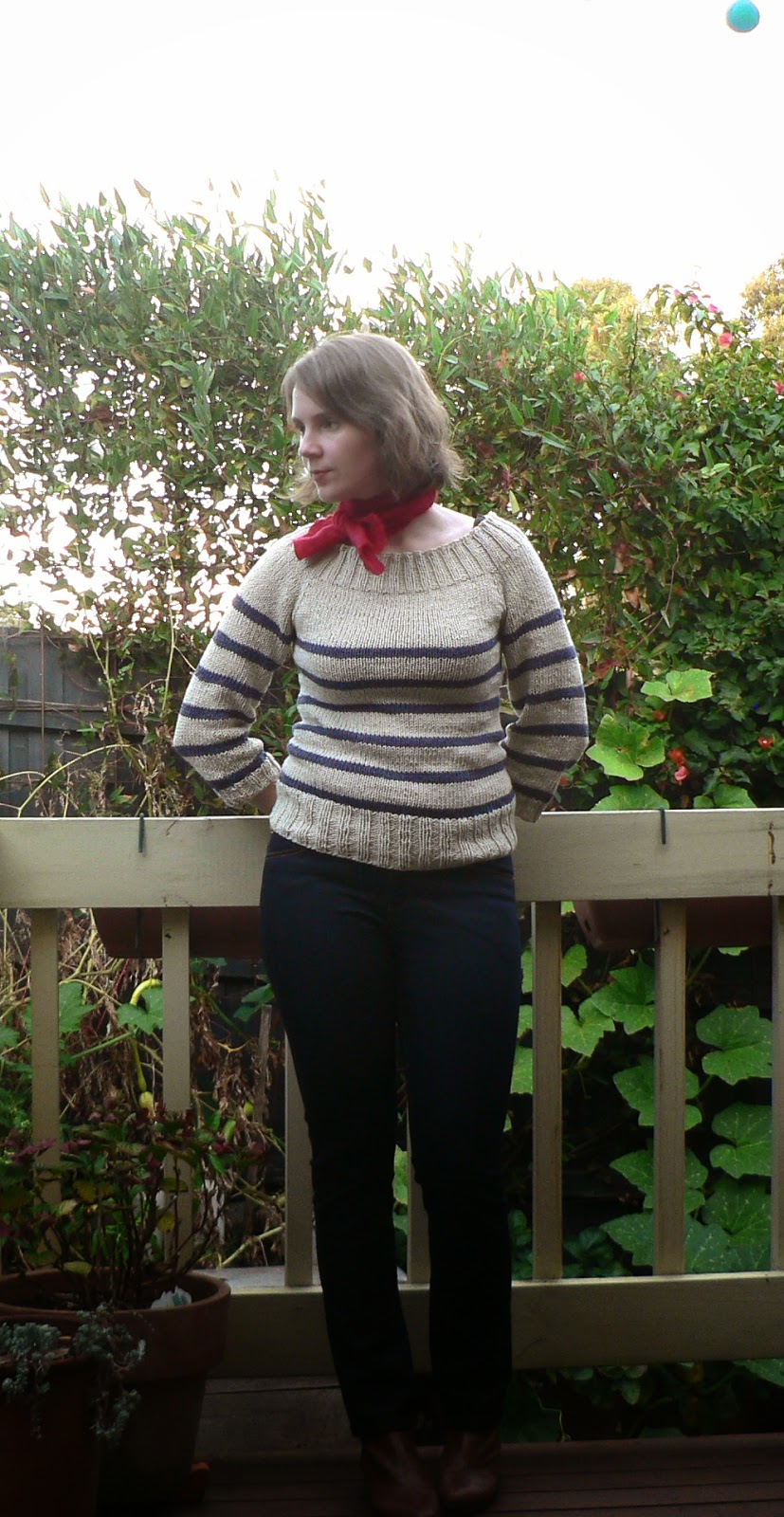 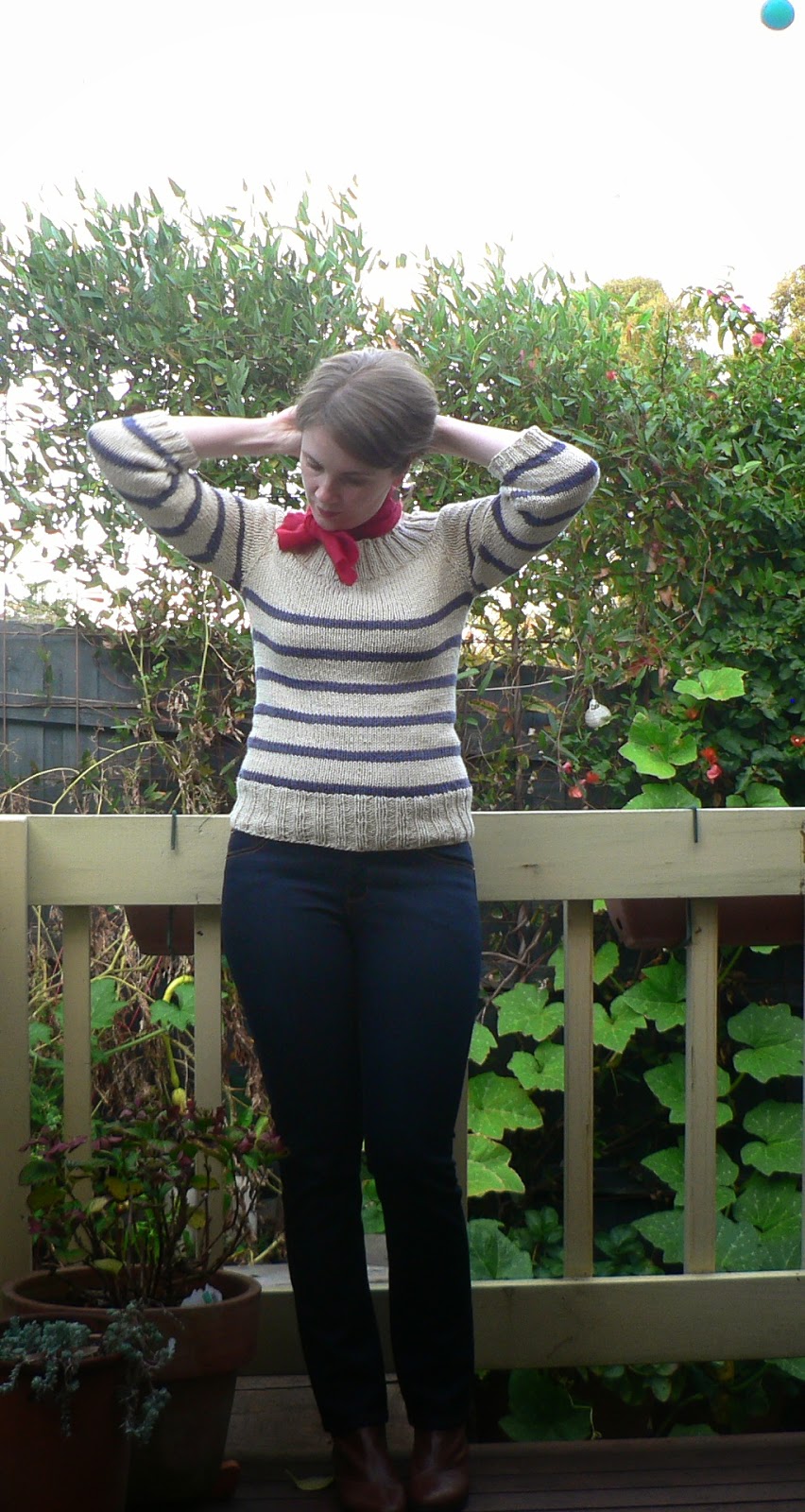 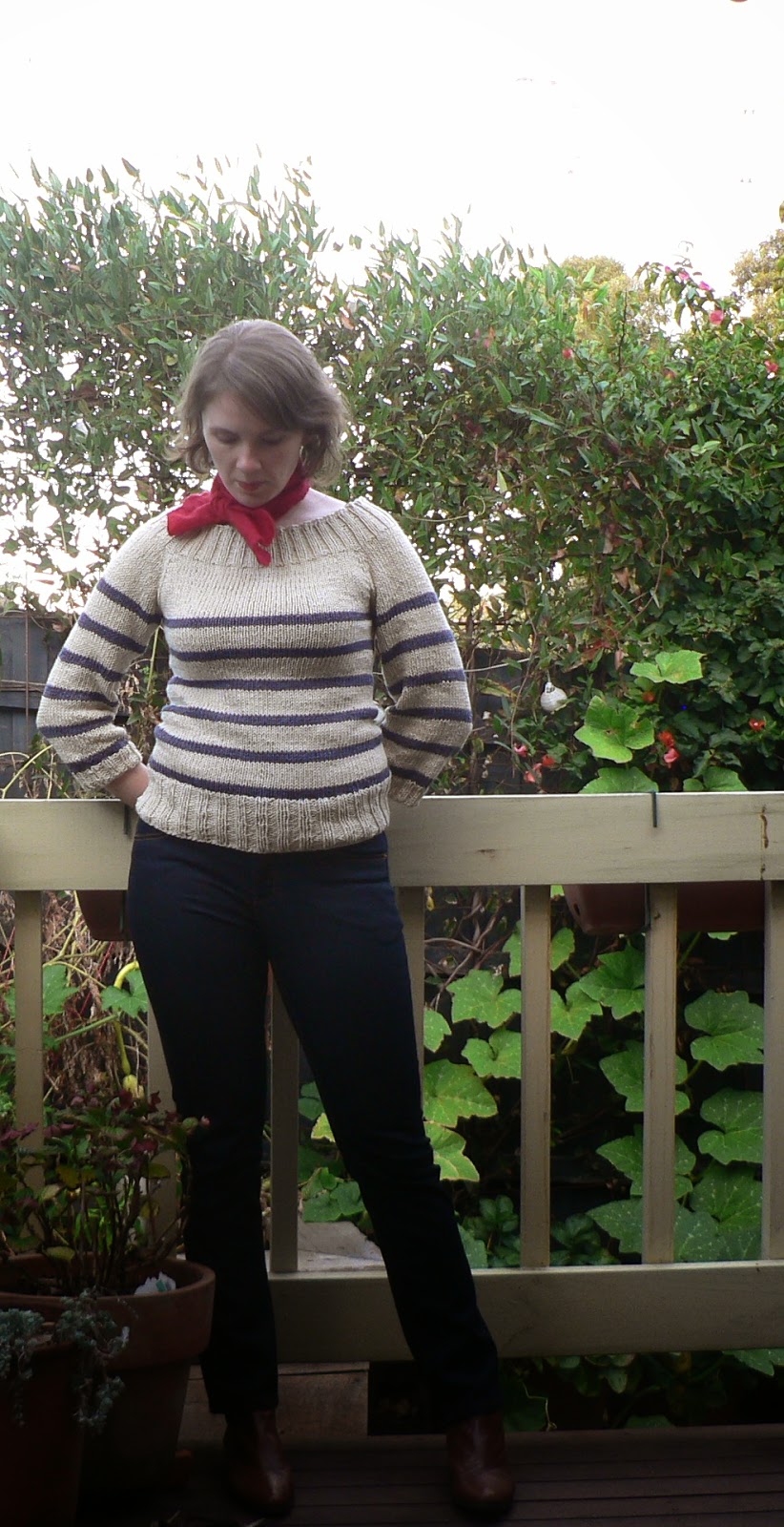 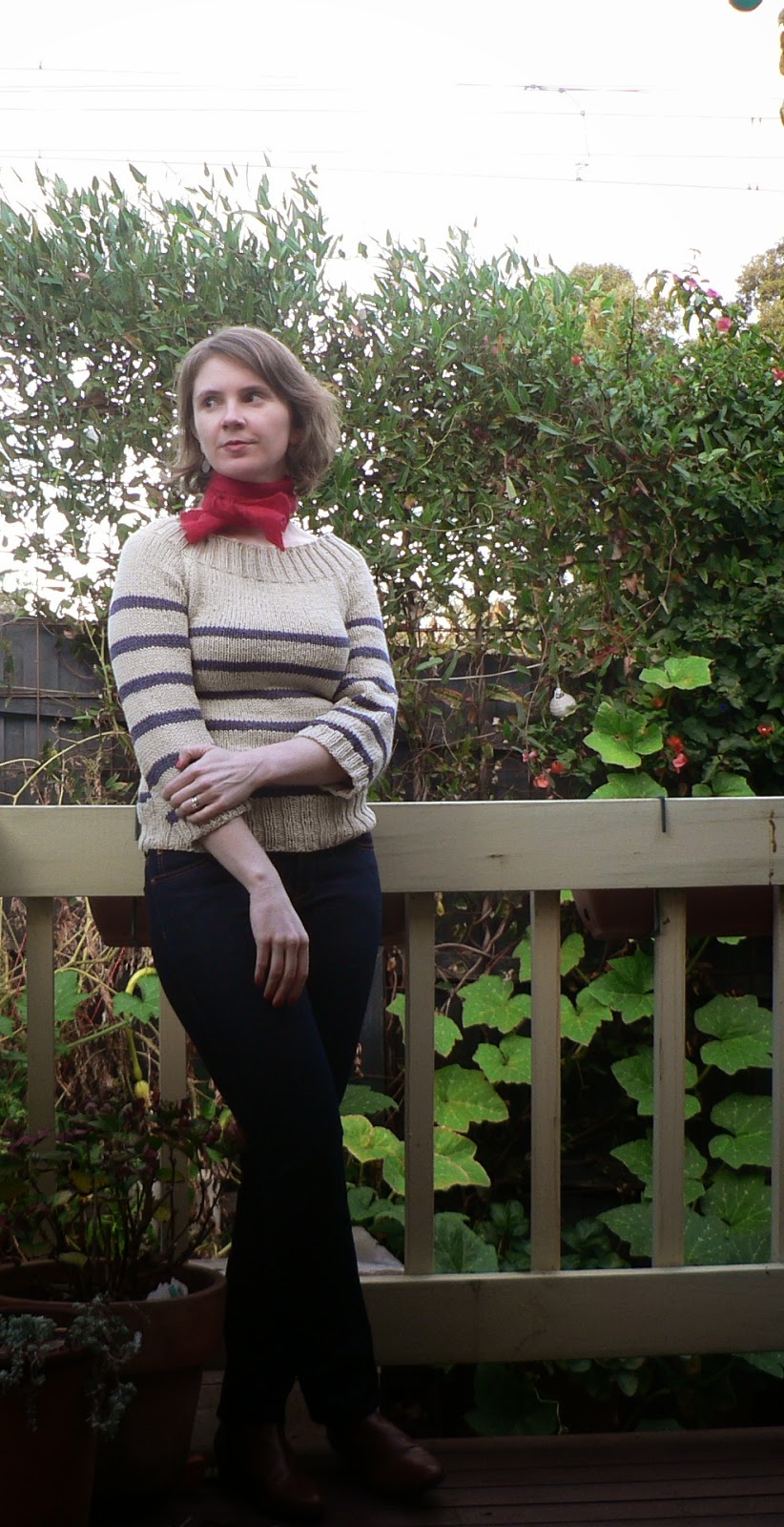 I wanted a slouchy fit through the body but quite a few knitters commented on Ravelry that the neckline was very wide. I cast on a size small, using smaller needles, and increased up to bigger needles after a couple of rows. I then did an extra yoke row to increase up to a medium in the body, and to be honest I'd have been happy if it was even larger (the design is meant to be fitted). I kind of forgot about decreasing arm circumference until about 4 stripes in, so they're fairly loose. I'm rather pleased with the outcome (compared to the previous incarnation). The neckline was still a little loose, so I carefully threaded some beige hat elastic through on the wrong side to cinch it in and it worked a treat. 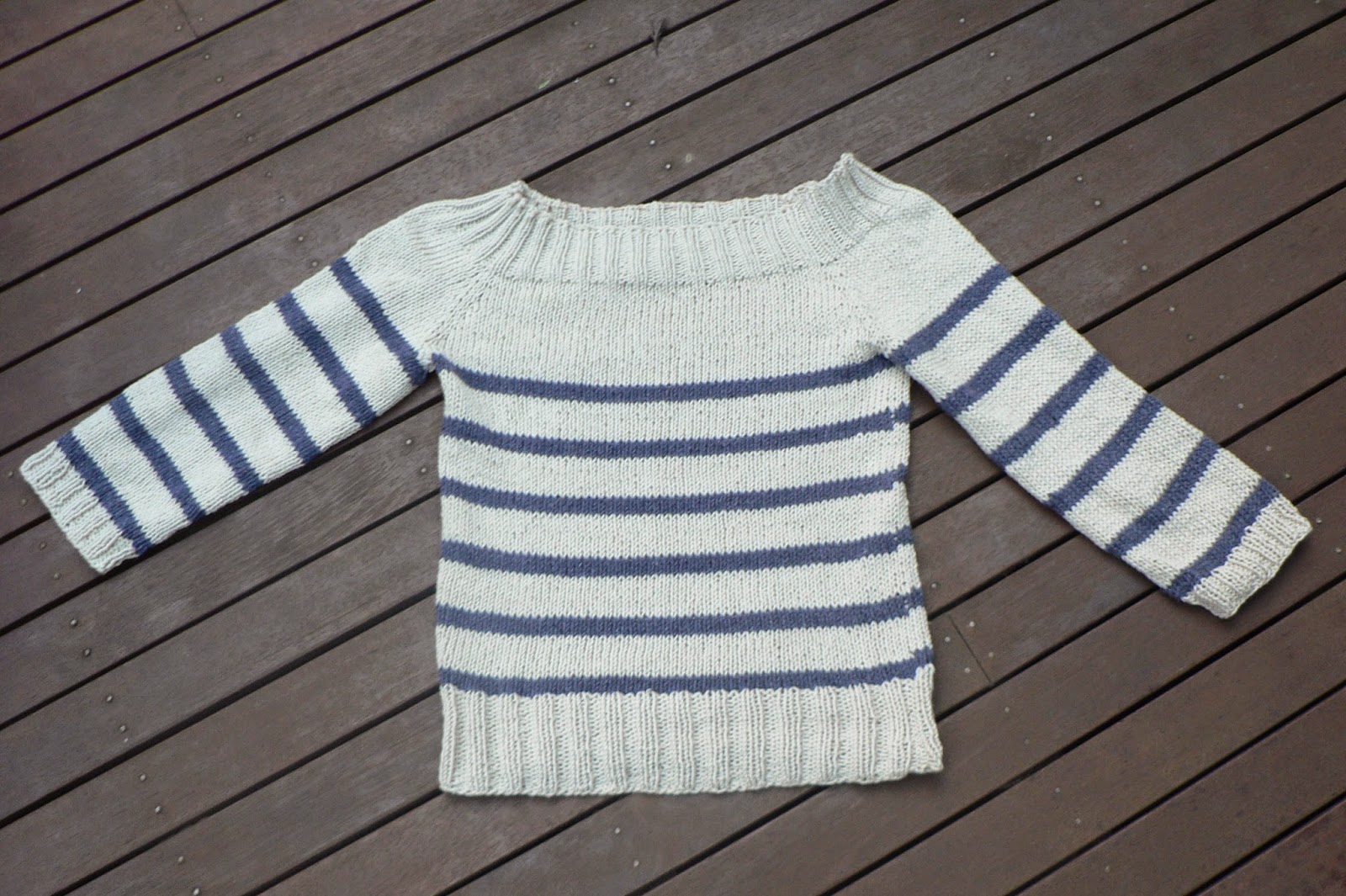 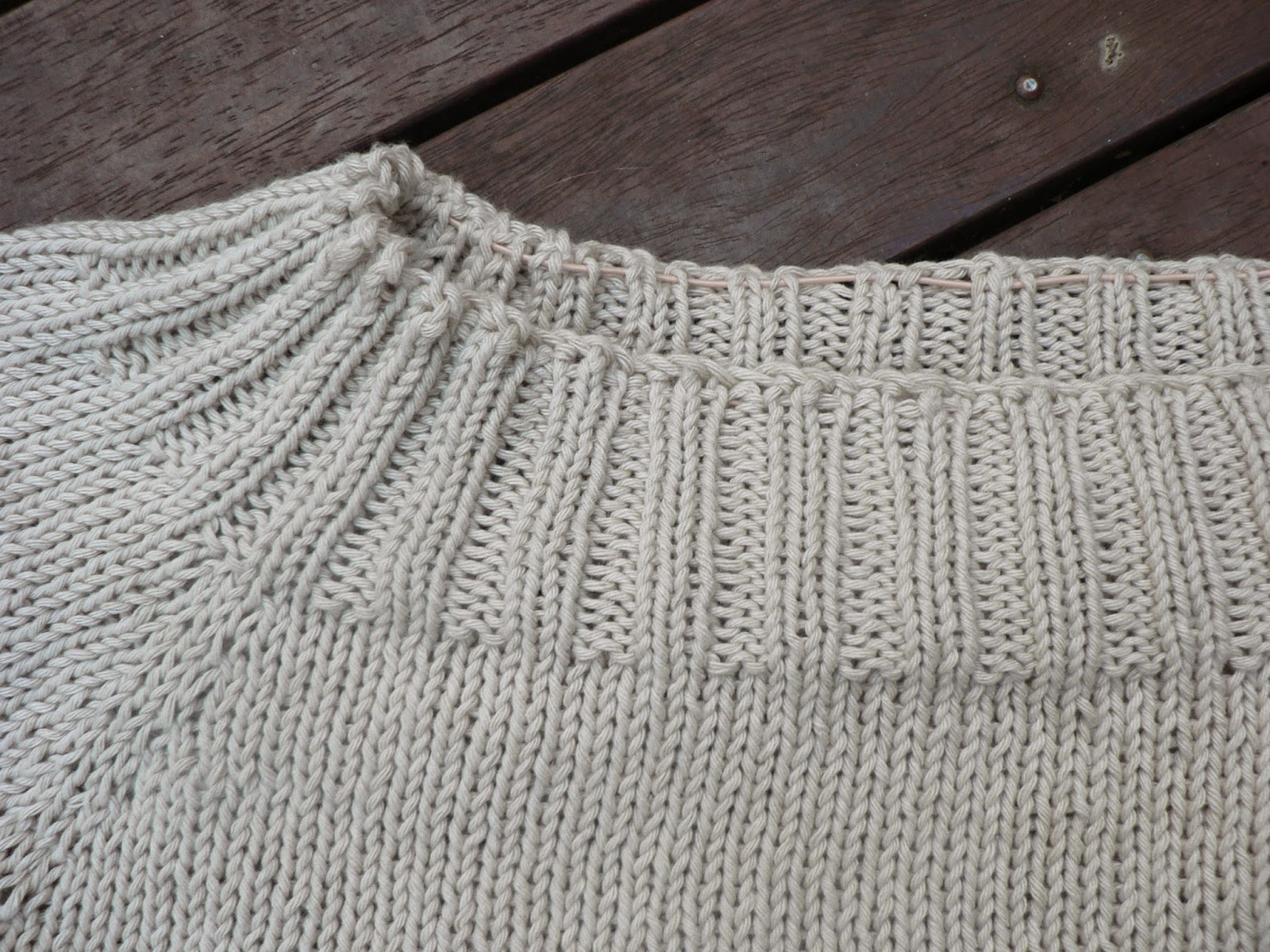 I always seem to learn a new skill, trick or technique with each new knitting project, and this was no exception. I cursed Past Sarah when unravelling the old jumper as she'd cut and knotted each colour change with each stripe. So this time around I used a fabulous technique called the Overlap Join (from my guru the Techknitter of course) to knit in the new colour with each stripe - it means at the end of the garment there are far fewer ends to weave in, because you've already done it at the colour change. Life changing I know! I also used her marvellous instructions to finish off the last stitch when casting off in the round, to get a jogless finish. She's such a clever woman!

Have you ever tried combination knitting? What's your worst holiday disappointment? Does anyone want to buy a Kombi? (Just joking..... I think....).
Labels: Fail Finished projects Knitting