Friends I promise you this is the last gaudy man-shirt I will subject you to for a while. I've posted my latest Negroni over at Stitch 56 but wanted to share with you a bit more of the nitty gritty changes I made since my first Negroni, the epic Mindblower creation of 2015.

At the same time as purchasing the most tasteful fabric in the world for my guy I also grabbed this fab retro inspired Vinyl Vacation Alexander Henry print. Is this not the perfect fabric for some Alohawear? 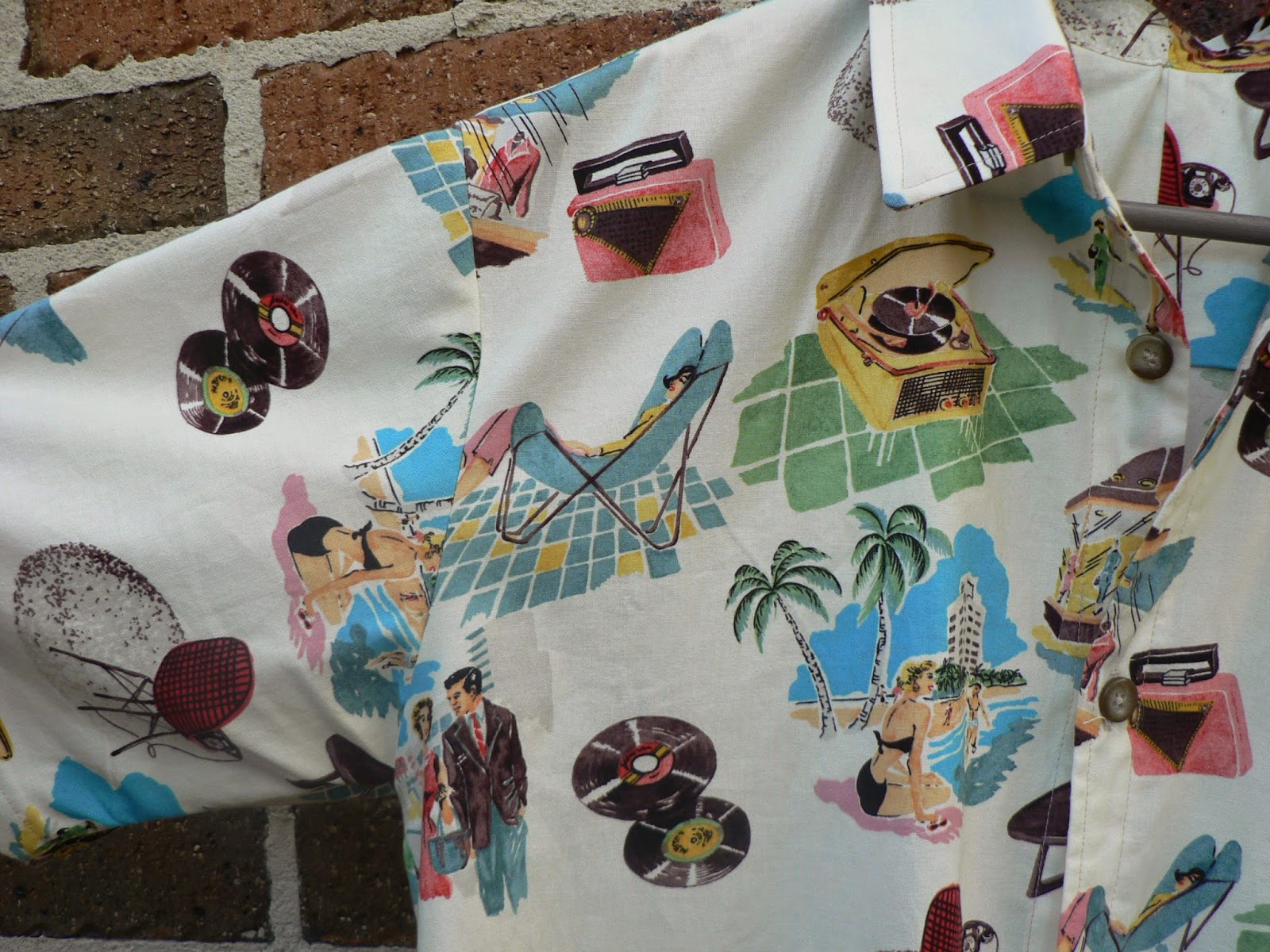 The man wanted less bulk around the collar and plackets with his next shirt and I was scratching my head on how to achieve this then inspiration struck! I was hugely impressed by Sewn By Elizabeth's resourcefulness with her fellow's latest Negroni - she'd fiddled around with her Grainline Archer pattern and used it's collar and collar stand pieces to turn the Negroni from a camp shirt to one with a traditional collar and stand. I went the easy way and followed Male Pattern Boldness' shirt sewalong from a few years ago. He has a great step-by-step tutorial on drafting new front plackets, and suggests either tracing a collar stand/collar off a RTW shirt or borrowing one from another pattern. 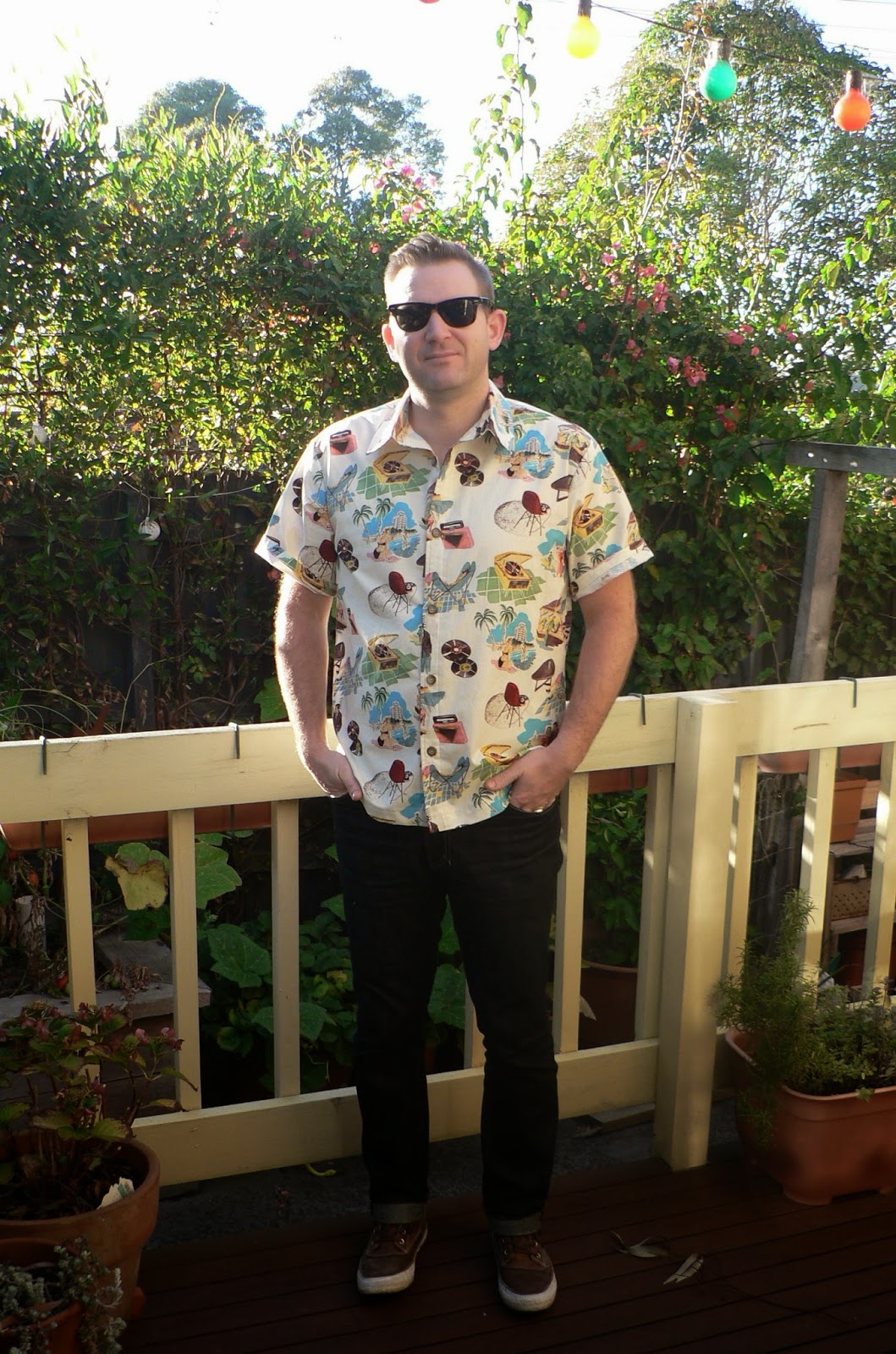 I borrowed from a Burda pattern I happily discovered I owned, and almost got it right. Luckily the pieces were a little big, rather than small, and you decide to try this do as I say (rather than what I did) and make a toile version if you can. I had no spare fabric to cut a second stand and collar, so had to play around with what I had, and I think with all the faffing I may have stretched the pieces a little as I did have a few puckers in the end (cunningly hidden I must say in the centre back and front where no-one will spot them). Please stay silent if you noticed that I cut the collar with the design going the wrong way. That lady is meant to be upside down. How awesome would it be if Colette Patterns featured the Negroni as their monthly pattern and added a properly drafted collar/stand piece as a variation? It would add so much more flexibility to the pattern. 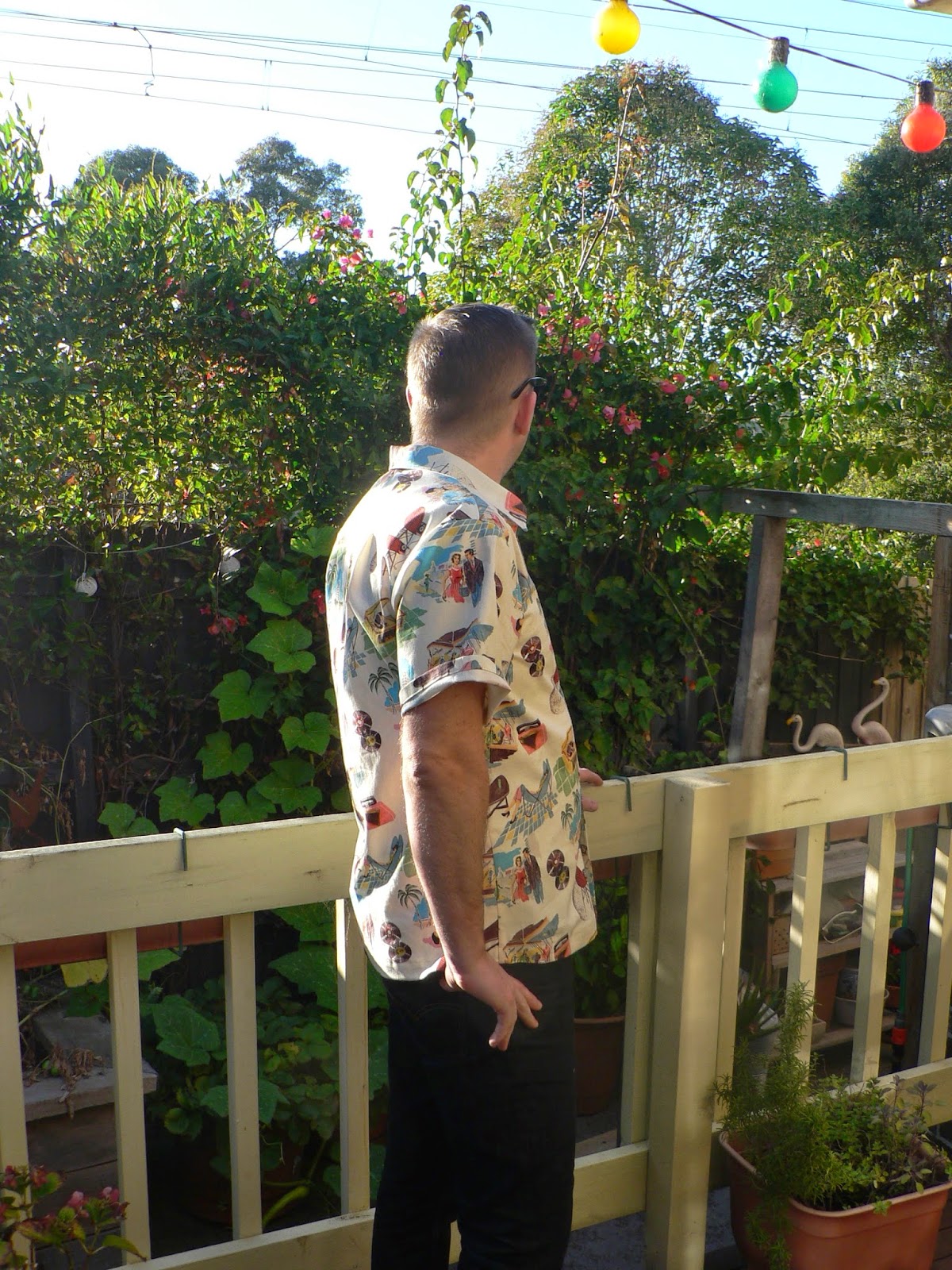 Due to a fabric shortage I had to piece the plackets, which meant having both on the inside, than the traditional outside, but when I checked out some RTW shirts there was such variation in how plackets were constructed that I really don't know what's traditional and what isn't anymore!

After my Granville shirt I took Morgan's advice and purchased David Coffin's shirtmaking book - I was thrilled to find a Kindle version for about $12AUD on Amazon. I haven't quite worked my way through it all but it's very interesting and I'm very impressed by the attention to detail that he encourages. 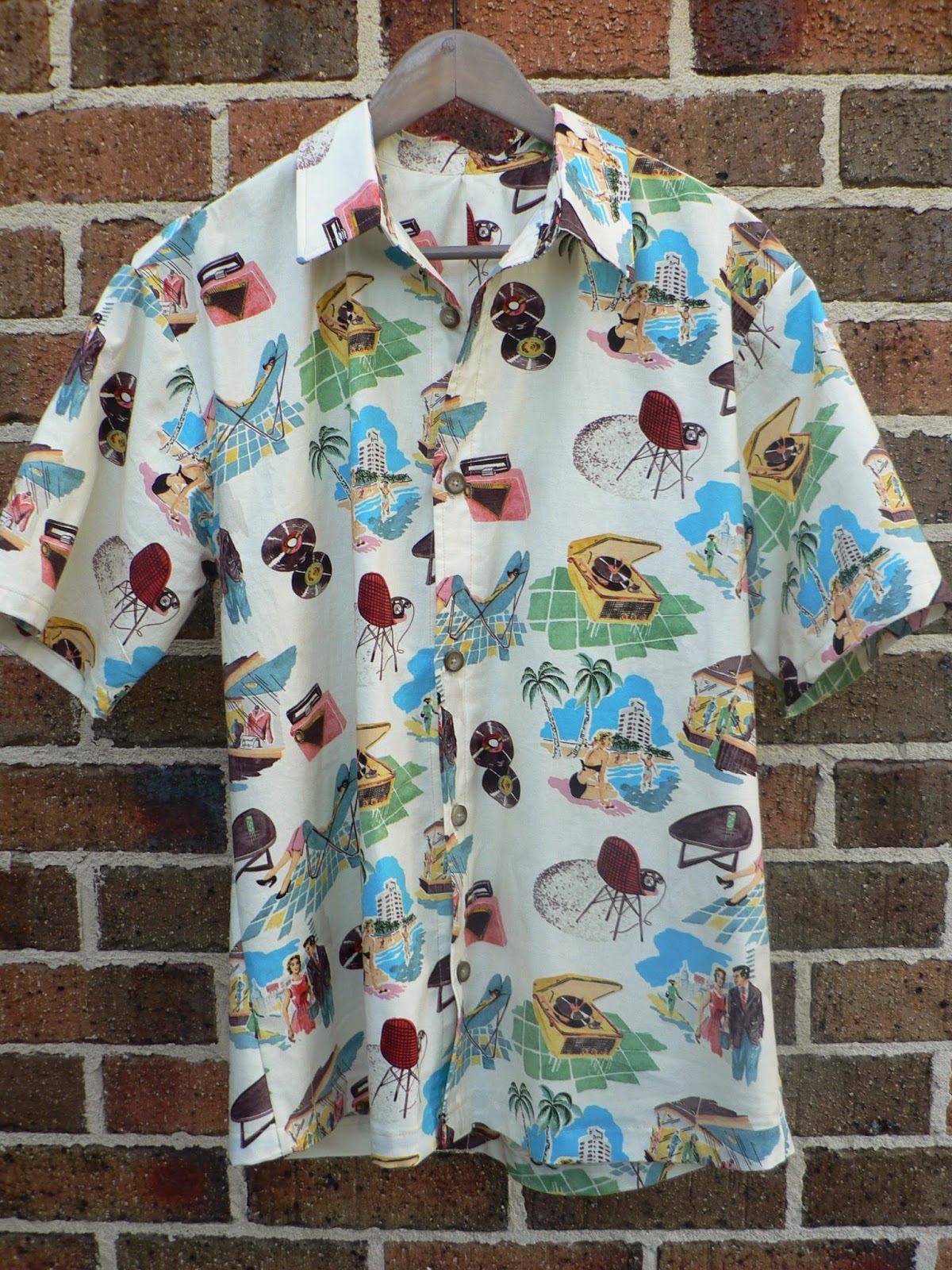 Anyway for the stand/collar construction I decided to go back to Andrea's excellent tutorial, but then looked a little closer at Peter's on the shirt sewalong and noticed that his had a very slight difference which gave me a slightly better finish. They both suggest attaching once piece of the collar stand to the collar, then the free collar stand to the shirt, then the whole shebang, but where Andrea suggests attaching the OUTER collar stand first then topstitching down the INNER to finish it all off, Peter suggests the opposite. So thats what I did, just to see if it made a difference. And I think it did - when you think about it the INNER collar stand is generally what is more visible if you don't wear our top button done right up to the top. If you attach the OUTER stand first you are doing your final top stitching on the INNER stand so you need neat top stitching AND have the seam allowance folded under perfectly and evenly. If the inner stand is already attached you've a lovely even seam allowance already stitched in place, and what you are folding over to stitch down is the OUTER stand seam allowance which will be hidden under the collar. So if it's a little wobbly and dodgy (see pics below) it won't be as visible. Does this make sense? I still top stitched from the inside after basting down the outside, so that it was as neat as possible. I think it made a big difference. Here's a close up of the nice inner collar stand (attached first) compared to the rather very shithouse outer collar stand seam, topstitched down: 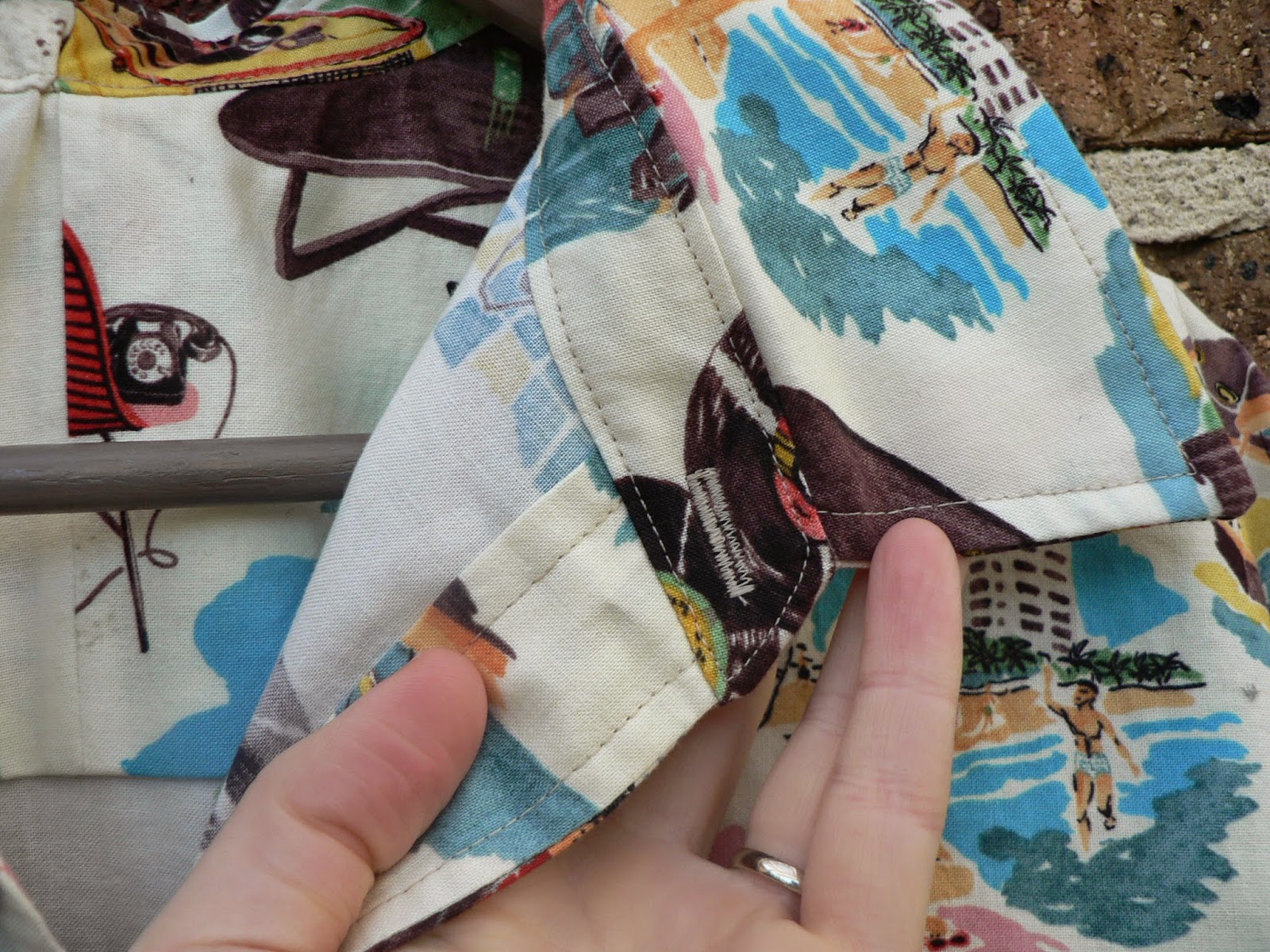 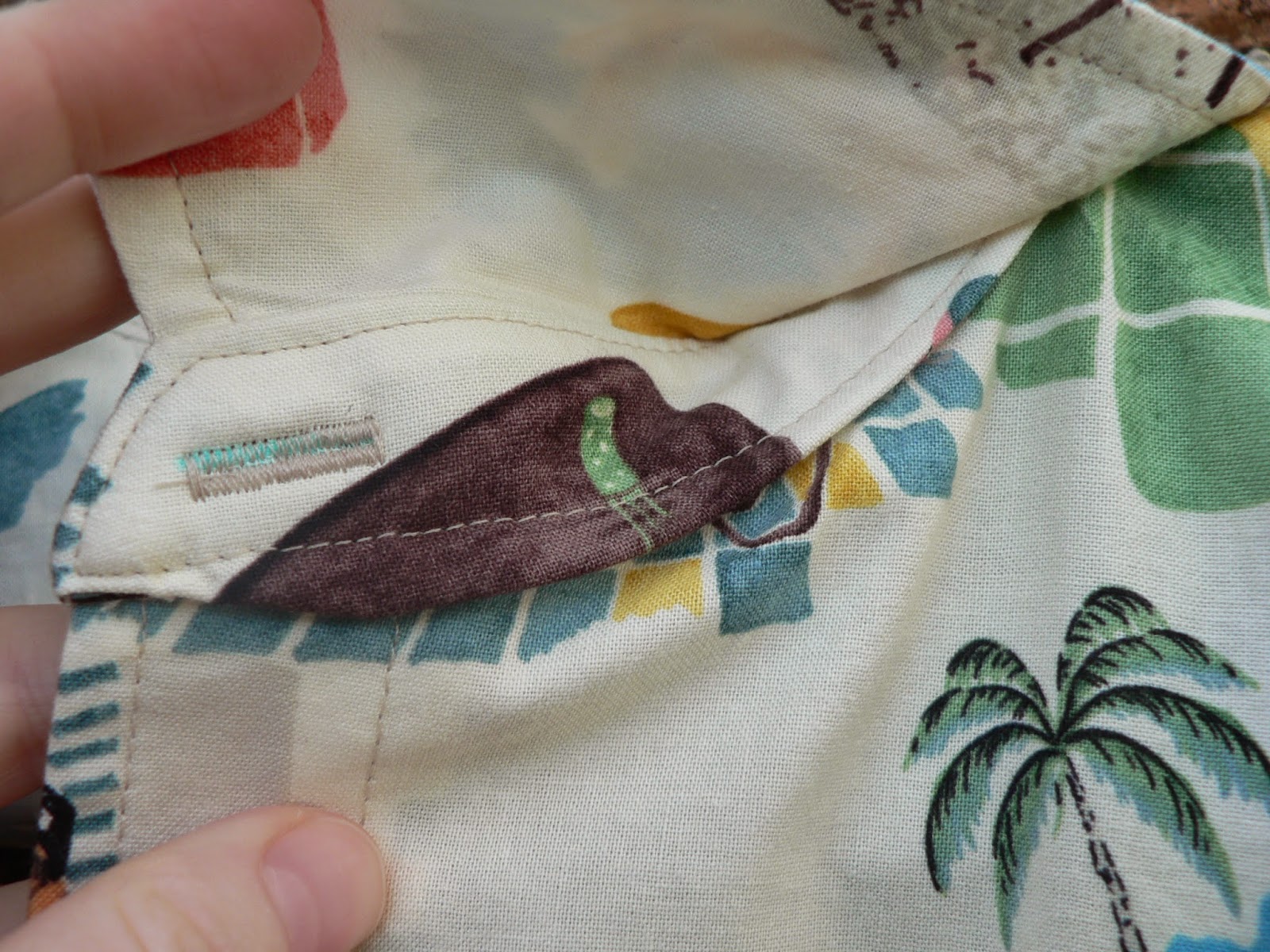 I actually intend to redo that, as it is making my eye twitch. But do you get my point? I think I'm getting a bit obsessed about collar stands.....

My beloved also requested a slightly slimmer fit - I took an inch out of the sleeve length, and did the sleeve and side seams with a 7/8 inch seam allowance which was just enough. I hemmed it by 2 inches, and all up I think it's a winner.

We are off to Byron Bay this week on a mega 3200km road trip in Sunny Boy to the Blues Fest and I really can't think of a better shirt for a man to wear than this one! But I repeat my promise to you - I wont subject you to any more loud shirts for a very long time.....

So....anyone else going to Blues Fest? I have a terrible fear that I won't be showering for 3 days....
Labels: Colette Patterns Finished projects Making for the Man Negroni shirts Stitch 56