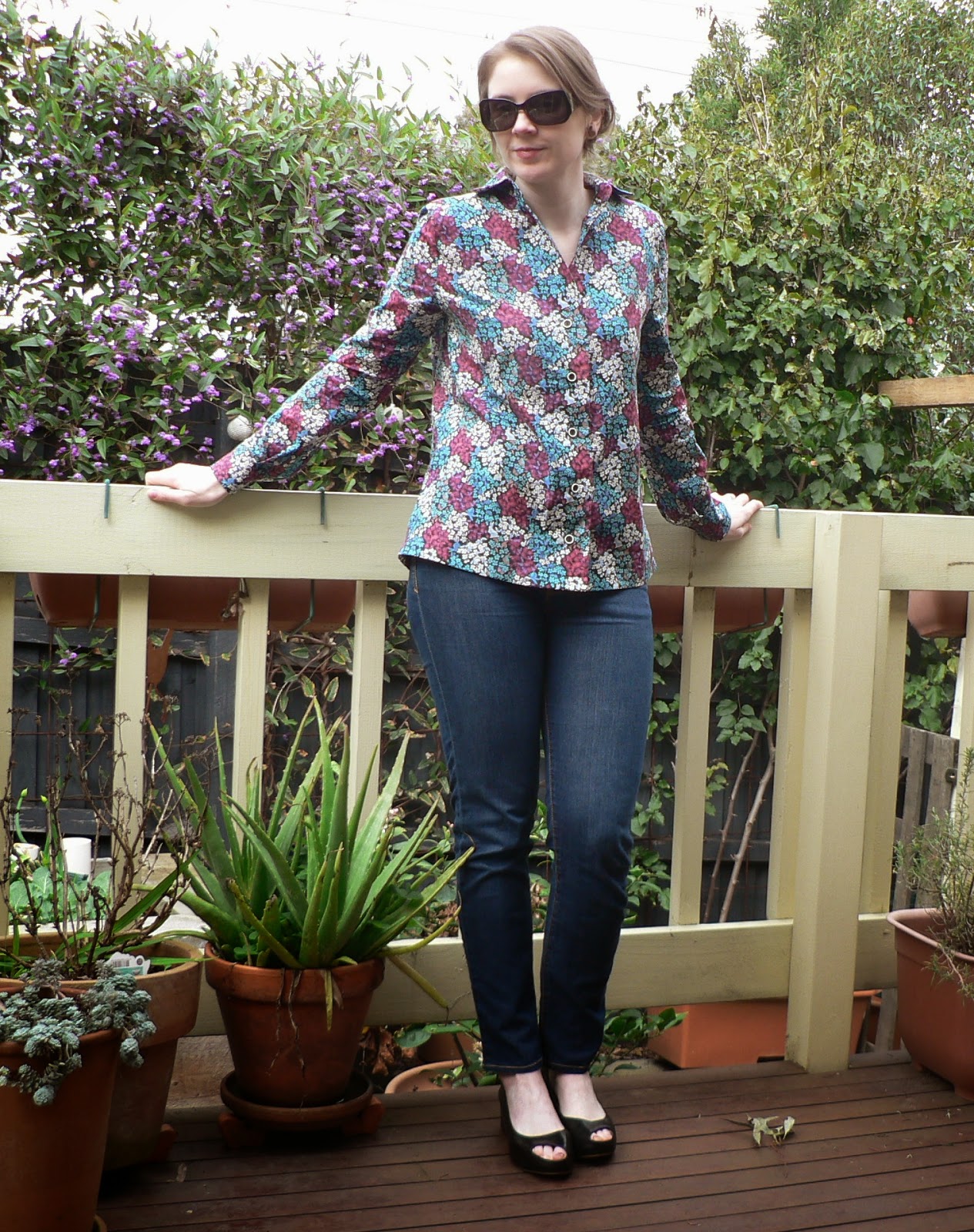 It's taken me 2 weeks but I finally have a wearable toile of the lovely Caroline shirt by Sewloft Patterns. I'll start by saying I think it's a fantastic pattern. I have limited shirt making experience - just my disappointing Named Tyler shirt, and my beloved's Alohawear shirt, both non-traditional shirts. I have a vintage 60's shirt cut out (since April! It keeps getting bumped...) but it's more a blouse-shirt hybrid, and I really wanted to make a basic, button through shirt with a traditional collar, placket etc. 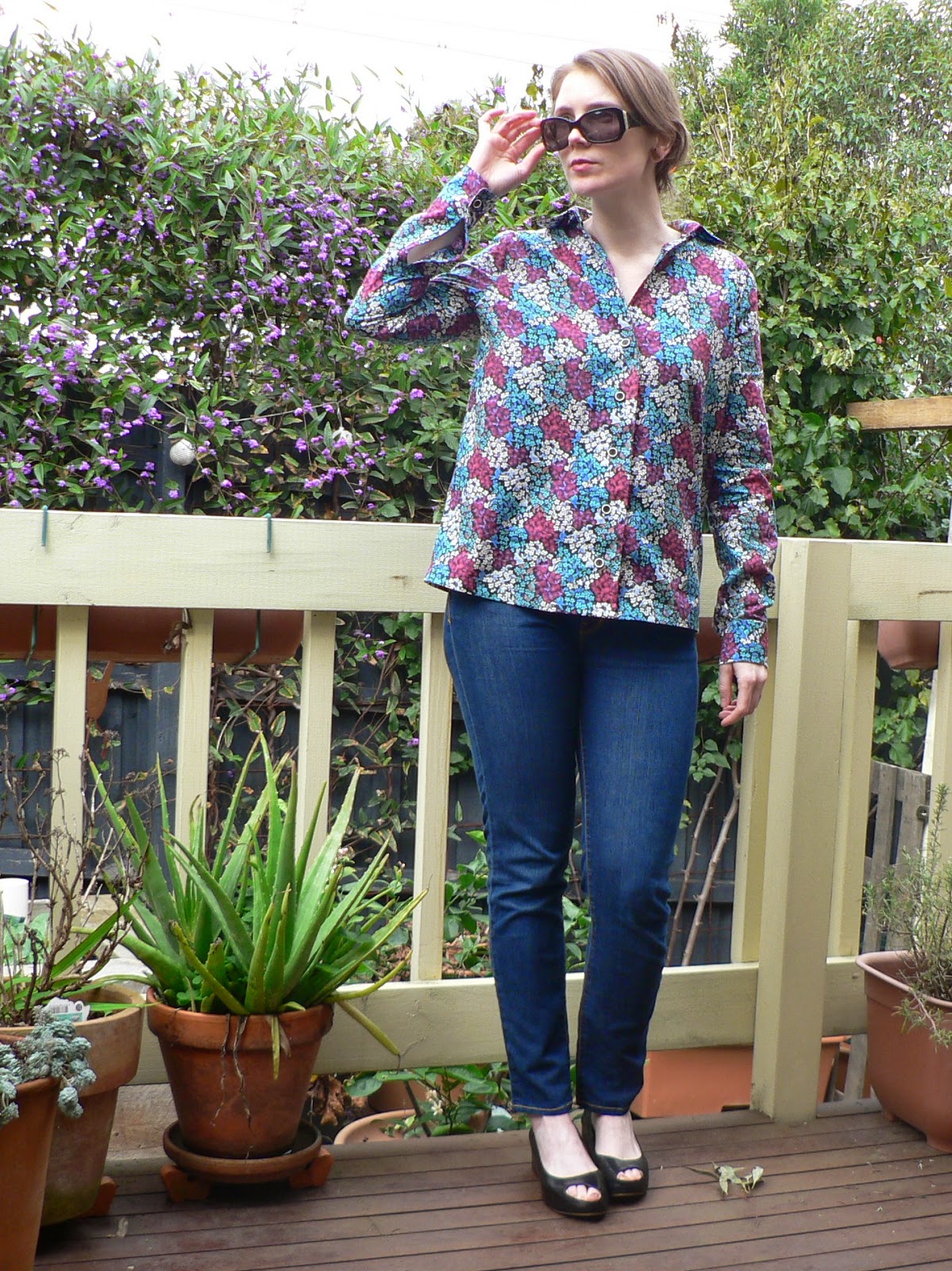 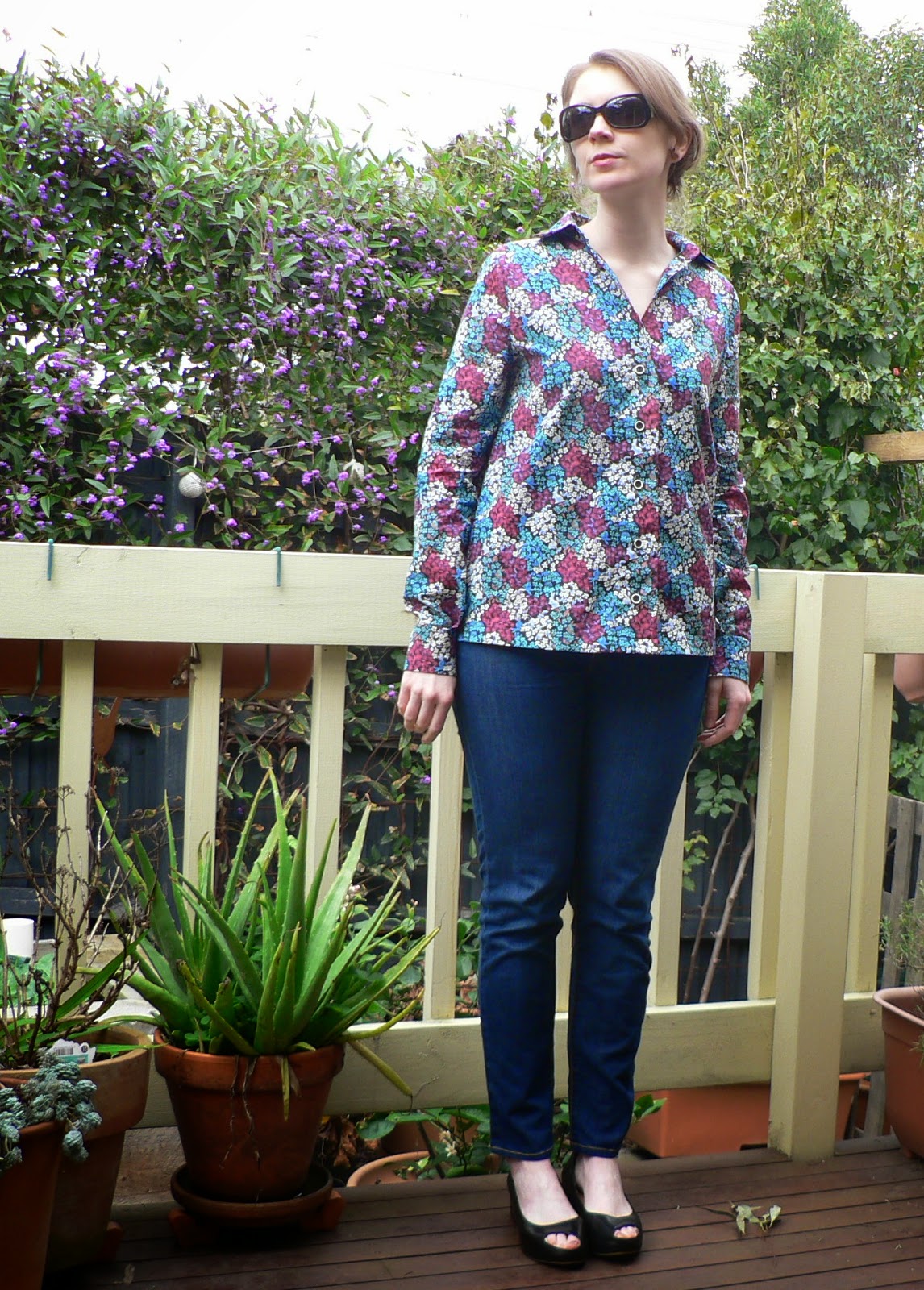 The pattern is drafted beautifully, and comes sized XS to XL. It is designed to be an oversized boyfriend style. Lost in a viral/codeine/steroid/antibiotic induced haze I decided to trace a straight size XS. Now I have not been an XS in any body part since I was a foetus, but I forged ahead. Sigh. Clearly it was going to be too small and it was - at the bust and hips. 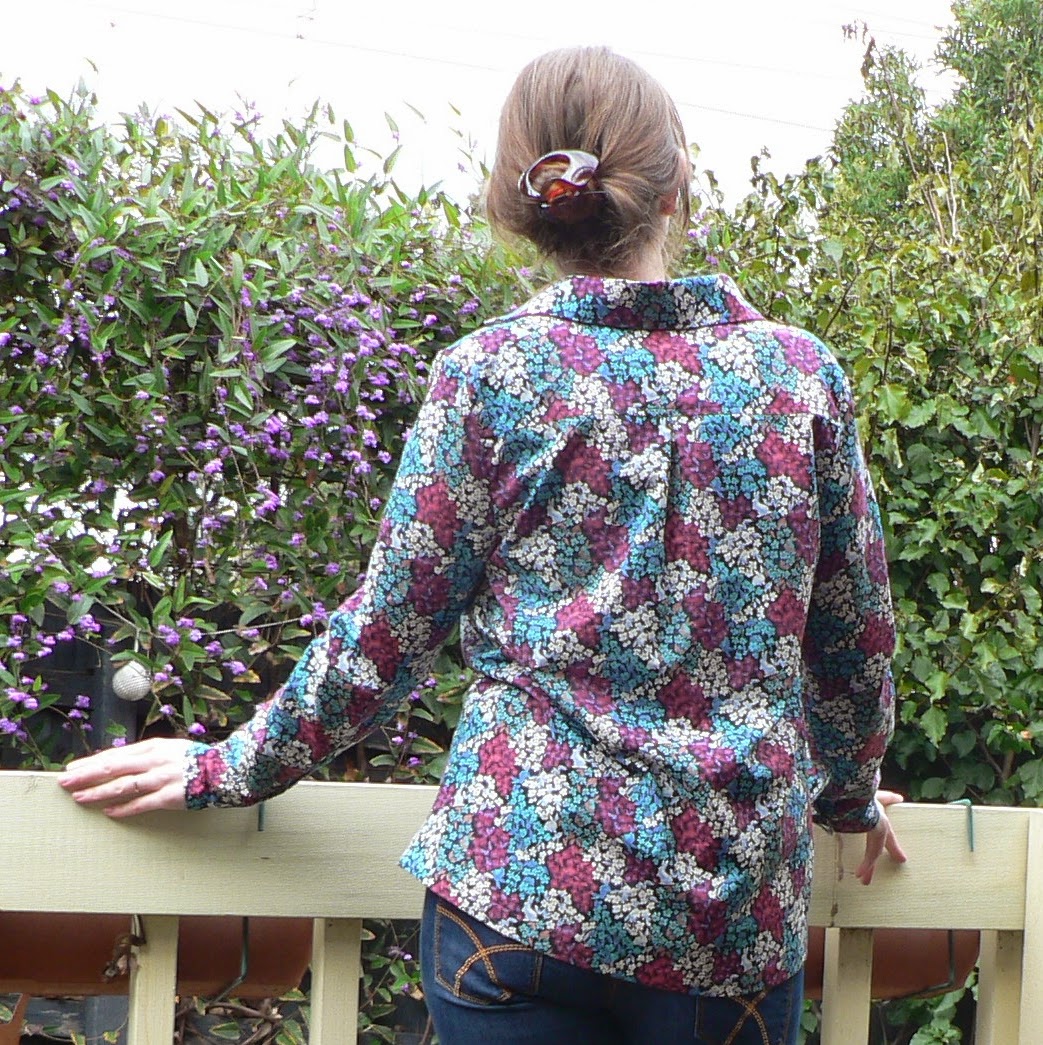 I actually think it fits quite well in my shoulders, but required some significant rejigging to get it to fit. I suspect I also need to make a forward shoulder adjustment as it keeps wanting to slip back a little off my shoulders. 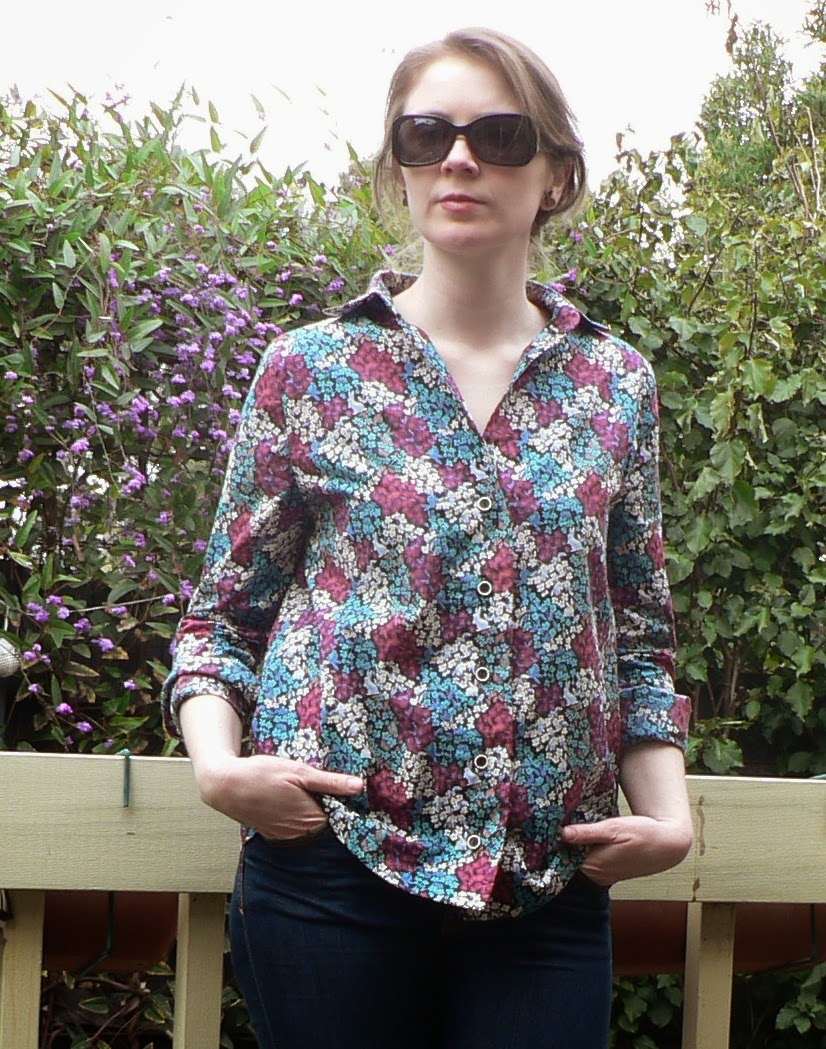 Now I know this is meant to be a toile, but I actually really liked this lovely Liberty-esque Japanese cotton lawn from my stash (purchased a good 18+ months ago from Spotlight, with the intention of making a Darling Ranges dress, back when I thought I could be the type of girl who wafted around in floral empire line dresses....). It's an interesting hybrid of twee, and folksy, and the colours and pattern remind me a little of the mille-fleur floral background of mediaeval tapestries like the Lady and the Unicorn. I thought a more masculine cut shirt would offset any cuteness. And thus I became quite bloody-minded when I thought it was going to go to waste and I decided to pull out all stops to Make It Work. 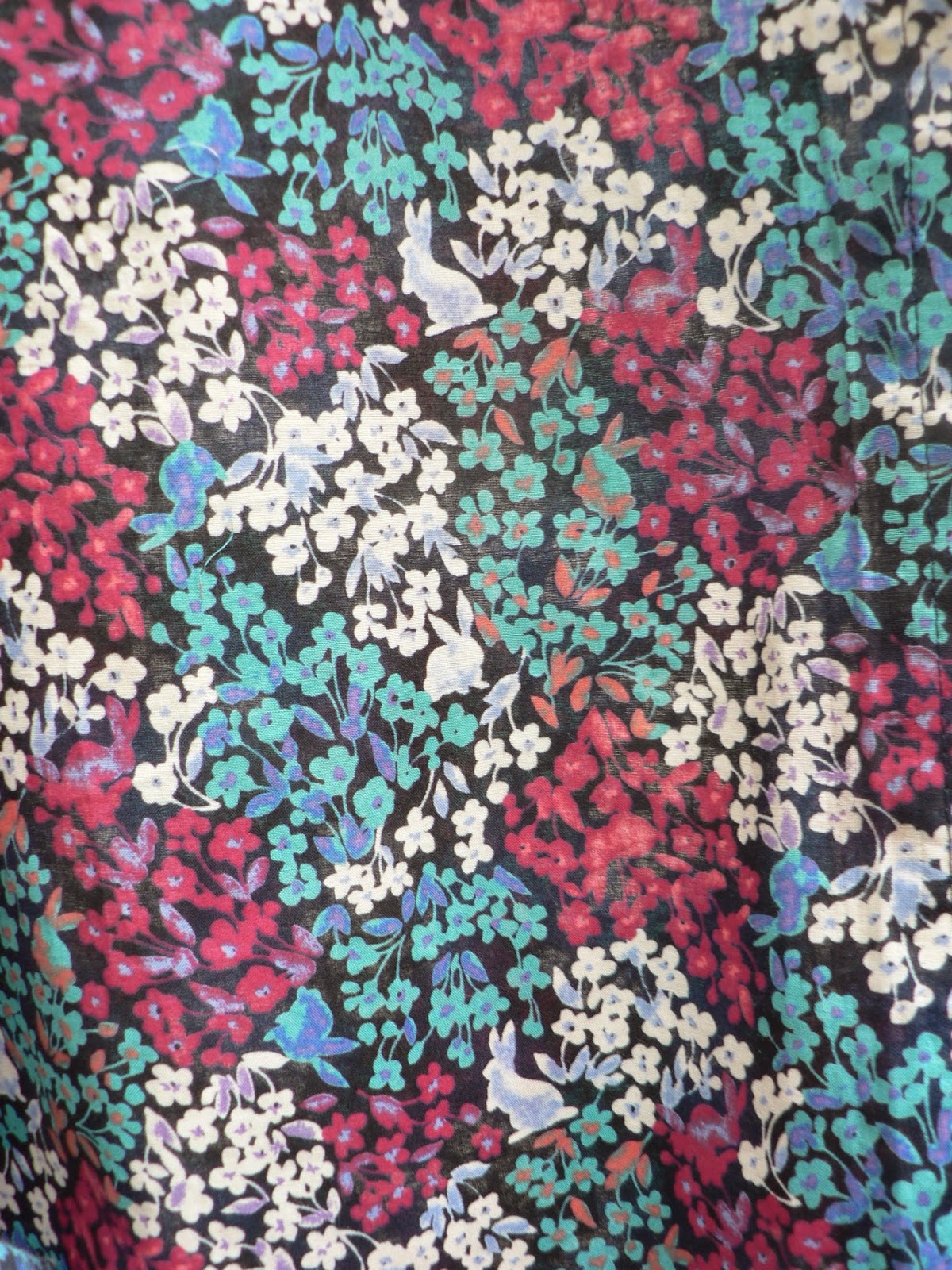 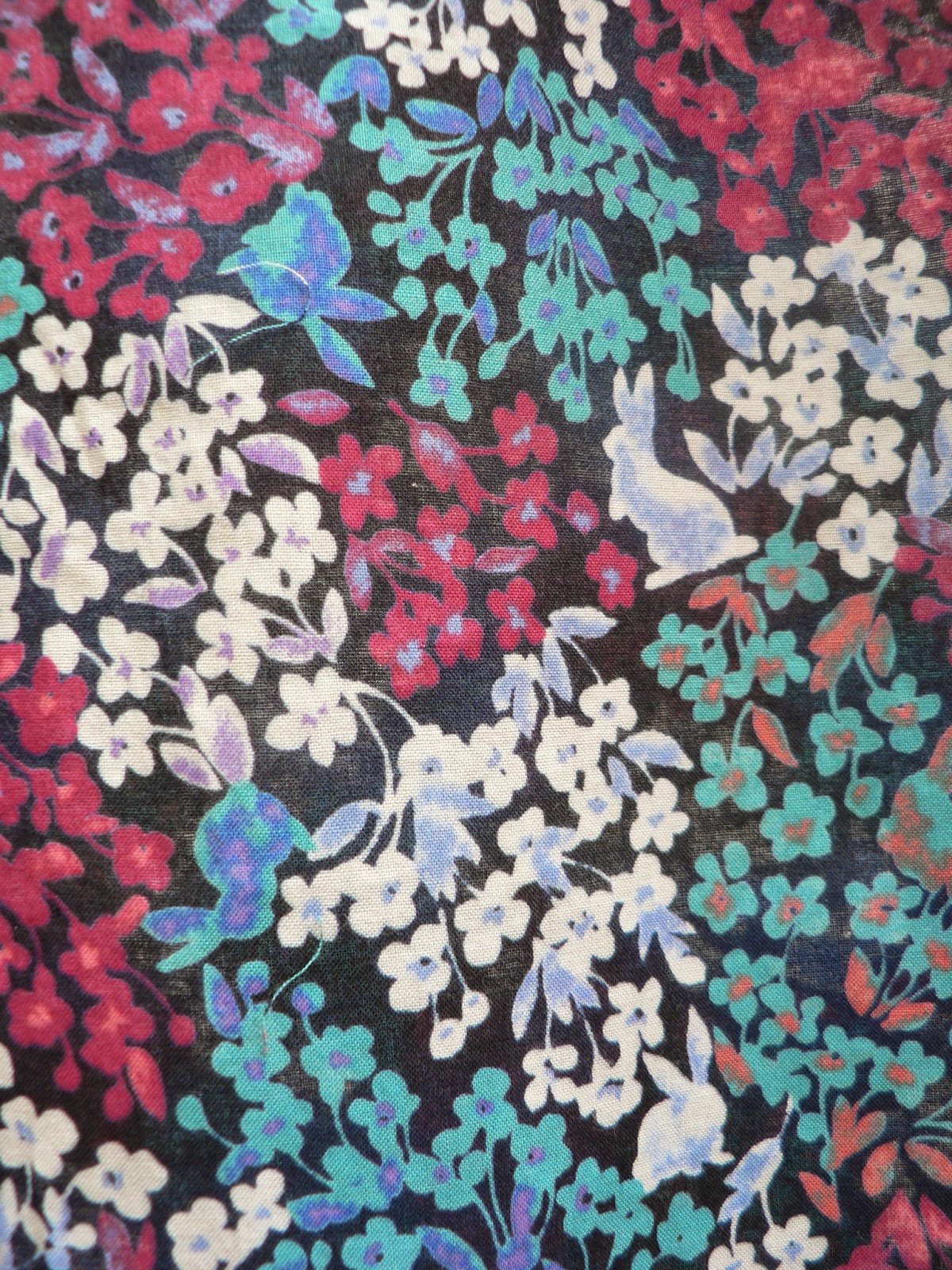 So I'm living proof that you can indeed do a french seam using a 3/8 inch seam allowance (the pattern uses 5/8 except for the collar and I was determined to french it so I could roll the sleeves up). I won't say it's fun, but it is possible. I also unpicked the natty little stitched-down pleat that runs down the centre back, giving myself an extra half inch or so of ease across the back. And my final adjustment was to completely abandon the very clever placket drafting and basically add an extra couple of inches across the whole front by adding more fabric to create a wider placket.

The original placket construction did confuse me, so I emailed the designer, Lauren, and she got back to me straight away. As luck would have it she was almost finished a step by step sewalong on her blog which did help clarify the process. It's very clever and looking at some of my beloved's shirts it seems to be a common way of making casual men's shirts - it's hard to explain but essentially you fold the buttonhole placket piece (which is cut as part of the front of the shirt) to the wrong side twice, then stitch close to the outside edge which catches the raw edge inside the placket, and the whole thing gets folded back out to the right side again and pressed flat. It's very neat and nifty, and I was sad I had to ditch it to get my shirt to fit, but next time I'll know. 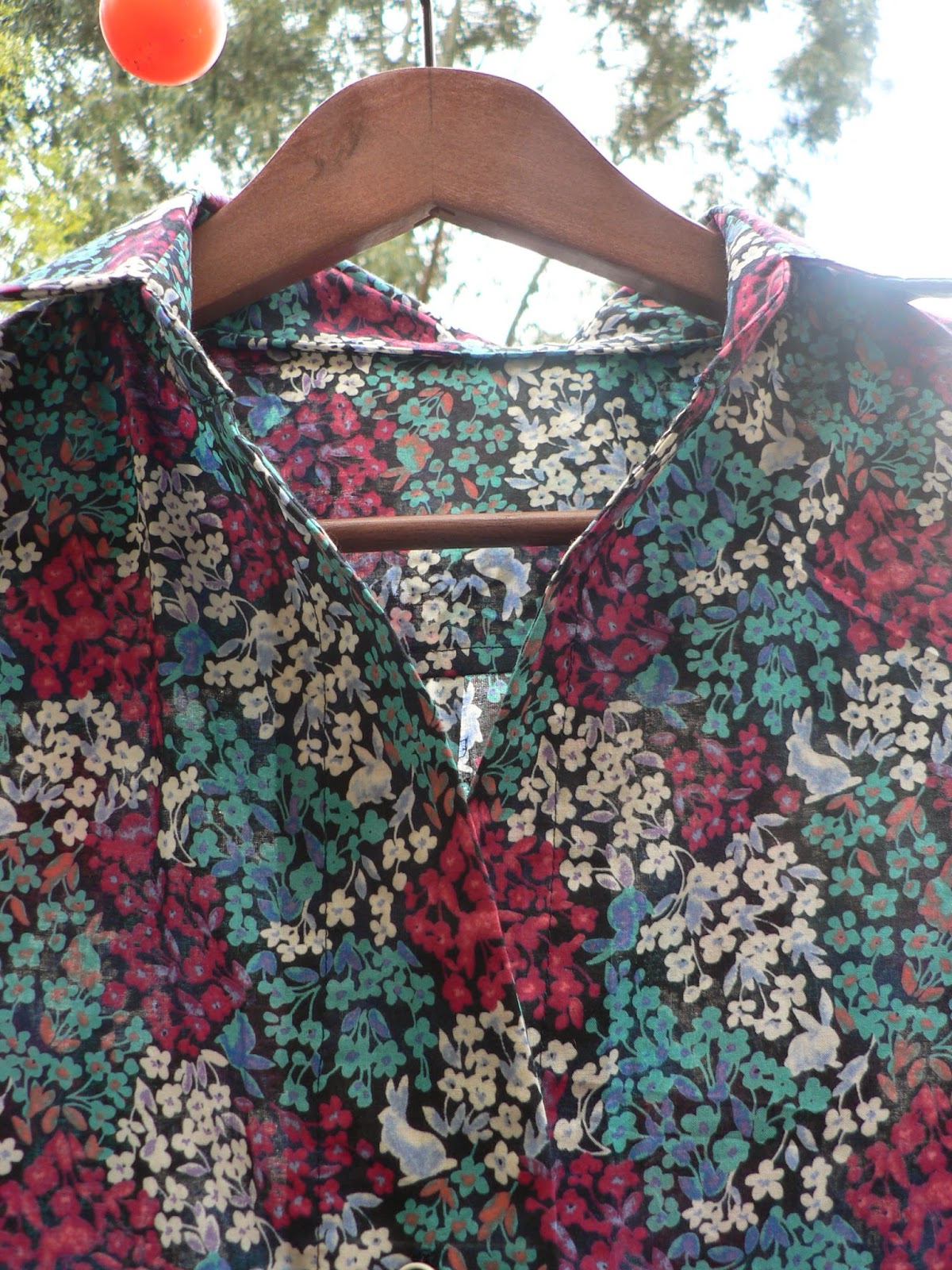 Because I'd added extra width to my neckline my collar pieces were now not going to fit, and after the gaping neckline of my Tyler I wasn't about to recut bigger pieces (and didn't really have enough fabric to do so without joining pieces) so I gently tapered the placket from the bustline back up to the width of original neckline width which I thought was a stroke of genius and thanks to my busy print it works very well (it means the shirt doesn't meet at the top of the neckline but I'd never wear the top button done up anyway so I am heartily ok with this).

Anyway, the other details of the shirt are great - the collar and cuffs went together beautifully. I went with the bias bound sleeve placket because I couldn't be bothered committing to a tower placket and the pattern makes the placket pretty hard to pick out anyway. For my next version I'll invest some more time in a tower placket as I just prefer the look of them - they're a bit more RTW. When I was taking photos, after adding the cuff buttons for the first time I felt that the placket opening was just a wee bit long - it'd be better maybe an inch shorter. 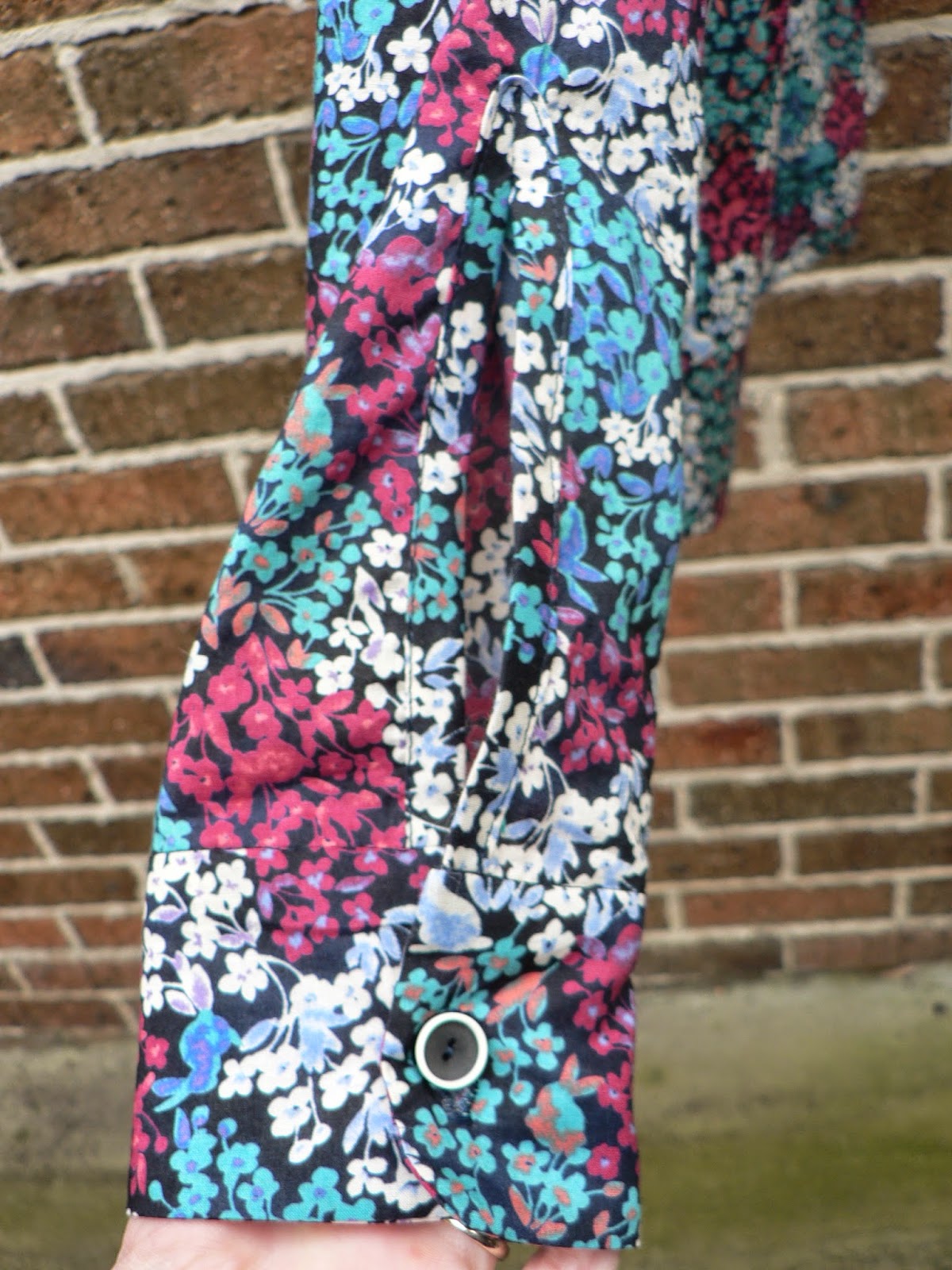 I was THRILLED to be able to french seam the armscyes. I sewed them in flat rather than in the round, and then did the sleeve and side seams in one swoop. They do seem a bit long on me, but that may be because I haven't sewn my button on in quite the right spot - if I made the cuff a little tighter they'd probably be perfect. I really am unlikely to wear this with the sleeves down though - I'm more a sleeves rolled up kind of girl. I used Andrea's marvellous tutorial for a less fiddly collar construction and it's pretty darn good I think. The yoke construction is fantastic - so neat. I cut my yoke on the grain rather than on the bias, as my fabric pattern is directional. My buttonholes are the best I've made, thanks to a marvellously simple tip from Maris - make the zigzag of the buttonhole stitch slightly wider - my machine has a tendency to get stuck on its own stitches with buttonholes, creating freaking annoying speedhumps that induce the sweary seamstress - not this time! If you don't follow Maris' blog I highly recommend it - she's a gracious and generous fount of knowledge. 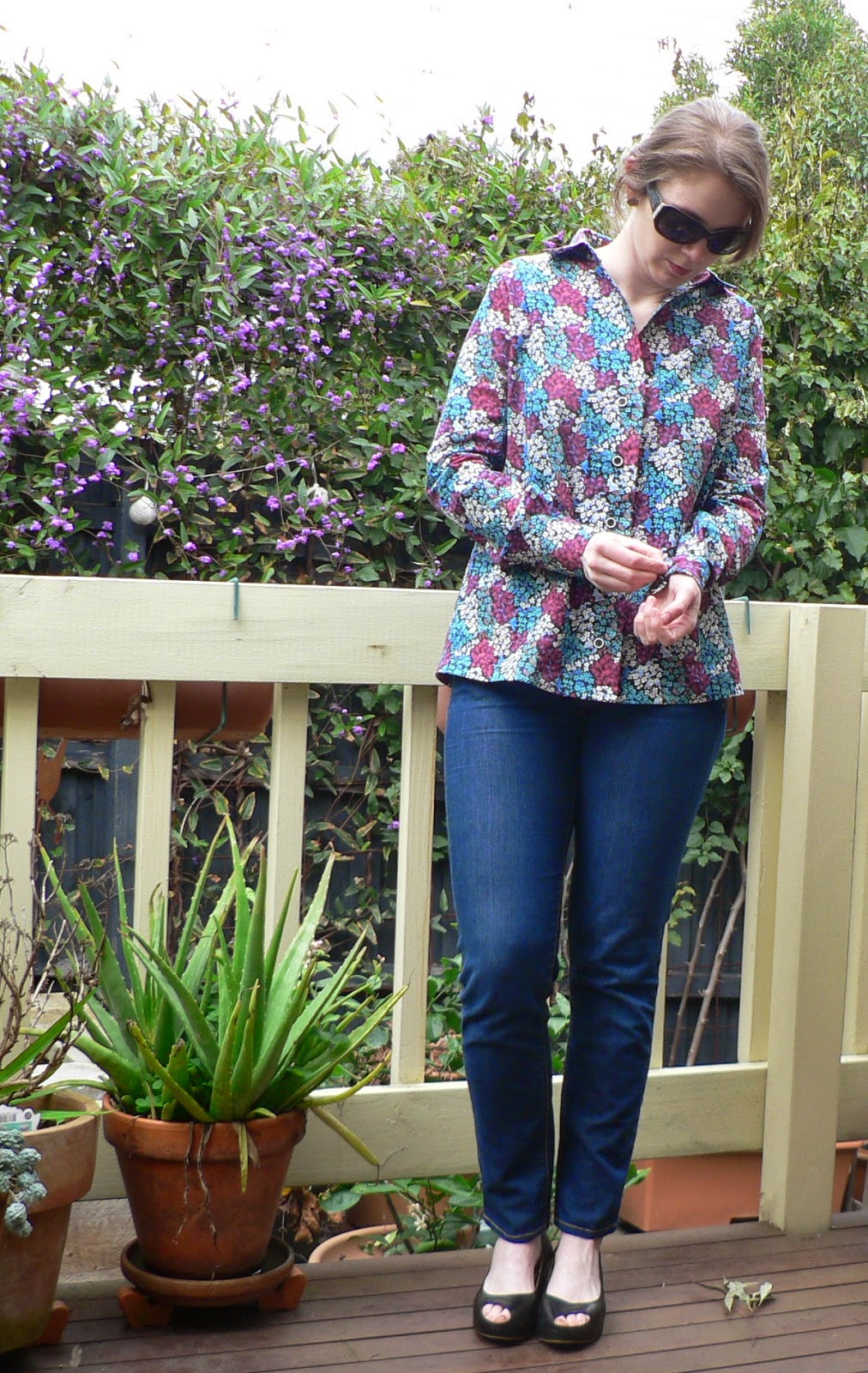 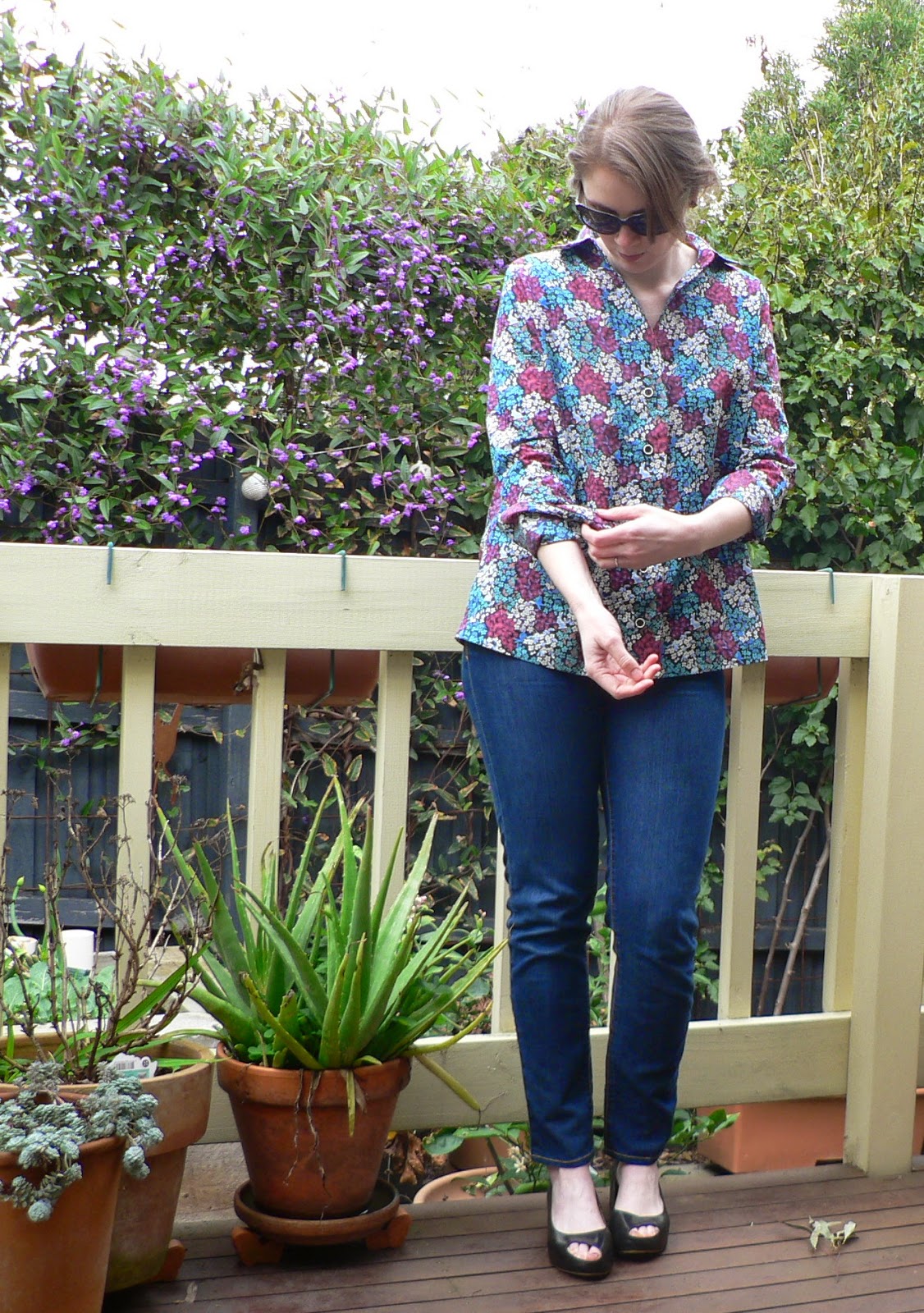 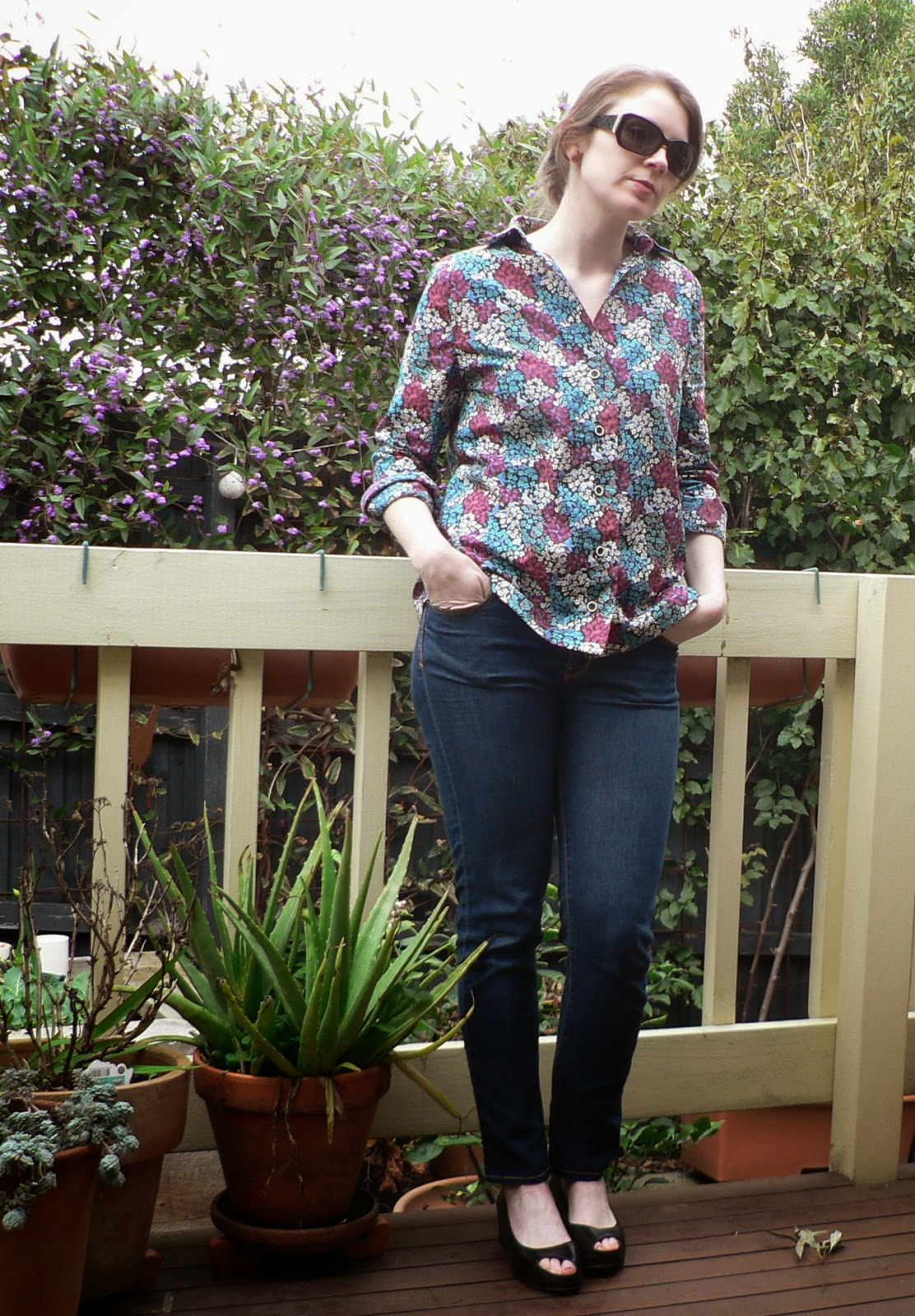 So it's a bit of a waffly post I know, but I thought it worth sharing my mistakes and fixes, along with the review of the pattern. I'm really pleased with my imperfect first version, and thanks to my (very forgiving) fabric (seriously - I can't remember the last time I unpicked so much - I used AN ENTIRE REEL OF THREAD) all my little errors are nicely disguised. I'm looking forward to doing this great pattern justice the next time around - a forward shoulder adjustment, a size XS in the shoulders and grading up to a medium for the rest of it should do the trick nicely!

Have you had a similar experience with something you just couldn't bear to give up on?