Firstly and most importantly I'm hugely excited to announce (hot off the press!) that Sunny passed his roadworthy today, which means that in a couple of days he'll be registered and hooning around Melbourne making people smile! It's such a relief - we'd have been gutted if we couldn't take him glamping next weekend!

Anyway, it's been apocalyptically hot here in Melbourne the last few days - its currently day 4 of a heatwave, and right now the temperature outside is 42.5 degrees centigrade (108F if you think in fahrenheits!) and we still have at least one more day to go. Its just too hot to even sew, but last week I did some tinkering with some pants patterns and thought it might be worthwhile sharing my observations and adjustments. It seems that a huge number of sewists want to conquer trousers this year, and whilst there is plenty out there on fitting, I do think that a lot of fitting success ultimately comes down to trial and error.

Last year I made several different pants patterns, including shorts (remember shorts are just pants with short legs!) and I don't think I quite nailed the fit on any of them. With the recent warm weather I pulled out my Colette Iris shorts and found them.....uncomfortable. I have put on a little bit of weight since I made them, but extra chub wasn't the problem. It was the rise. Just too close for comfort. I also mentioned (and I will say it again just for you Morgan!) that my Style Arc Elle pants were a bit too close fitting in a different part of the lady garden - not too short in the rise but just too close a bit higher up - borderline uncomfortable but at minimum I was just too aware of wearing them - and thats not how trousers should be. My Colette Clover pants are pretty good but they are a bit big because the fabric stretches very quickly so I think they sit lower on my hips than the Iris shorts. And finally I have worked out that my recent Burda 7250 wearable muslin trousers are too long in the rise - they sit about half an inch too low below where they should be, which affects the fit over my thighs and hips; hoiking them up a bit makes them fit a lot better.

So. Where does that leave me? 3 different patterns and 3 very different front rise curves. What is a lady to do? In the end I traced the curve of a pair of RTW pants that I have that I know are comfortable and fit well - some Uniqlo trousers I bought in NYC last year. I added a 5/8 inch seam allowance then laid them all out next to each other on my cutting mat, taping them down so the grains were parallel and so that the waistband seam was all pretty similar. See below:


I know it doesn't help to have the Burda pattern around the other way, but you get the gist - huge variation in length and curve shape!

I decided to tackle the Elle pants first, because my first version had become heinously unattractive as the fabric was balling due to extreme cheap'n nastiness. Lining up my Uniqlo curve with the Elle curve you can see they are quite different..... 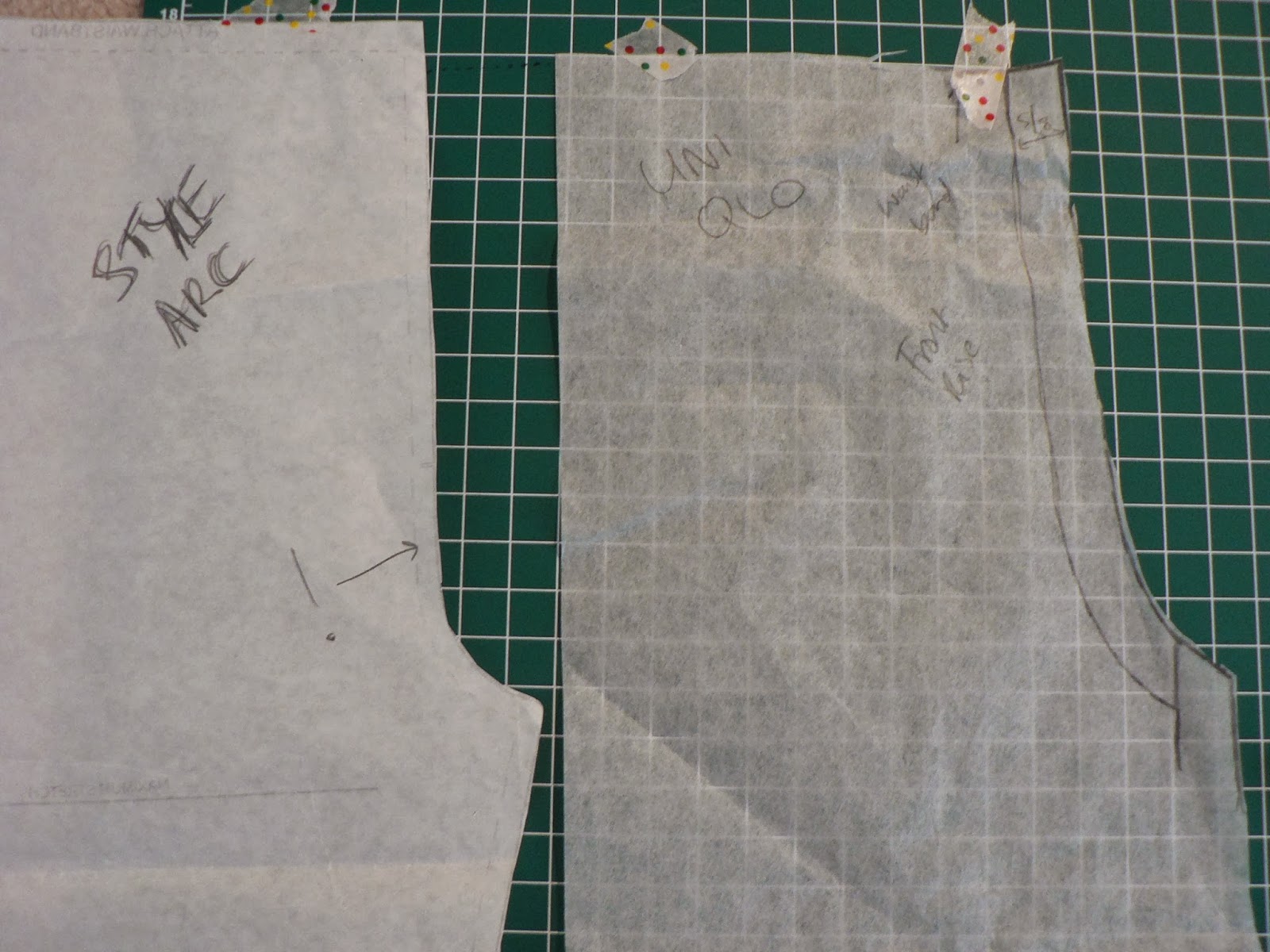 The exclamation point on the Style Arc pattern above marks where I felt they were a little too tight - I felt I was a few millimetres away from needing to order some Camelflagues (just a little product I had the misfortune to find whilst researching this fitting issue!)!  I laid them over each other - you can see that whilst the Elle pant depth was a little more it had just a few millimetres less of fabric in the area that I needed more. I know when I was trying to work out what alteration to make I initially assumed I just needed to cut the pattern away - after all cutting the curve away would create more room right? Negative Ghostrider! Cutting it away at the bottom (in the horizontal plane) to create more length would, but paradoxically cutting away the pattern and fabric in the vertical plane would make it tighter - just like if you cut a pattern away at the side seams your garment will get tighter, cutting into the width here would have been a big mistake - I needed to actually add a little bit of room (and it's just occurred to me that if I had ordered a size bigger I may not have had this problem - but who knows - I won't because the Style Arc patterns only come in single sizes...).

So this is what I did - added a little tracing paper and just added a few more mm, grading up to nothing at the top seam and matching the depth of the Uniqlo pants. The good thing about this experiment is that I figured the status quo of the original pattern was bearable and not visually obscene - the worst that could happen is I'd have to trim the fabric back to the original pattern line and live with it.

So, you ask, what happened? WHAT HAPPENED? I'll tell you what happened. A bloody disaster! I put version 2 on and I tell you I felt like I was being bisected by stretch bengaline! I actually shrieked and I think so did both the mirror and the lady garden! I ripped them off, stomped off and shittily pondered my next step. What had happened, of course, was that I'd shorted the vertical length by adding in the extra fabric right at the bottom. Number one was my original problem area, and number 2 was the new problem. So I just trimmed back the pattern grading down to nothing by the bottom and trimmed back the fabric to match. 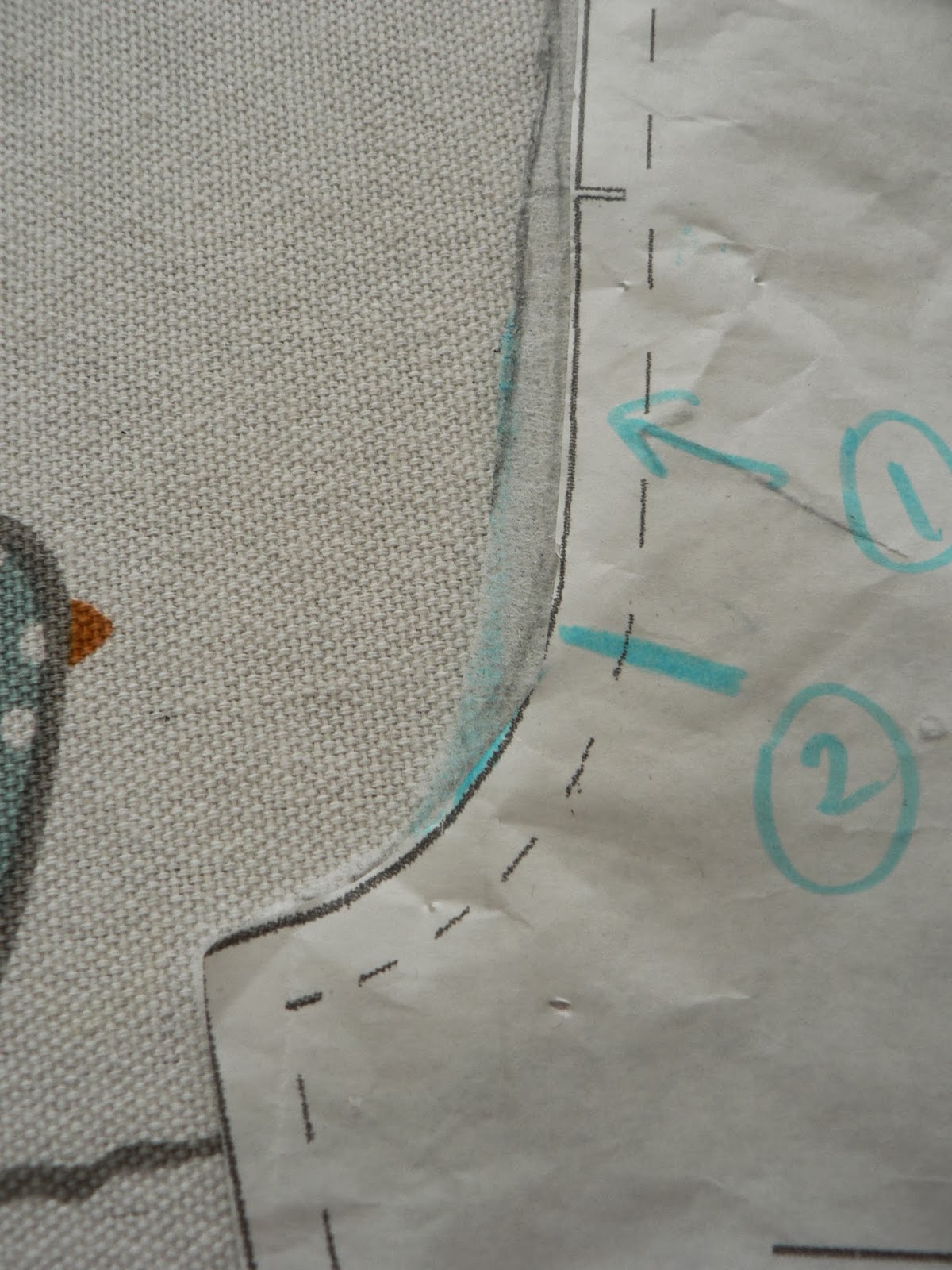 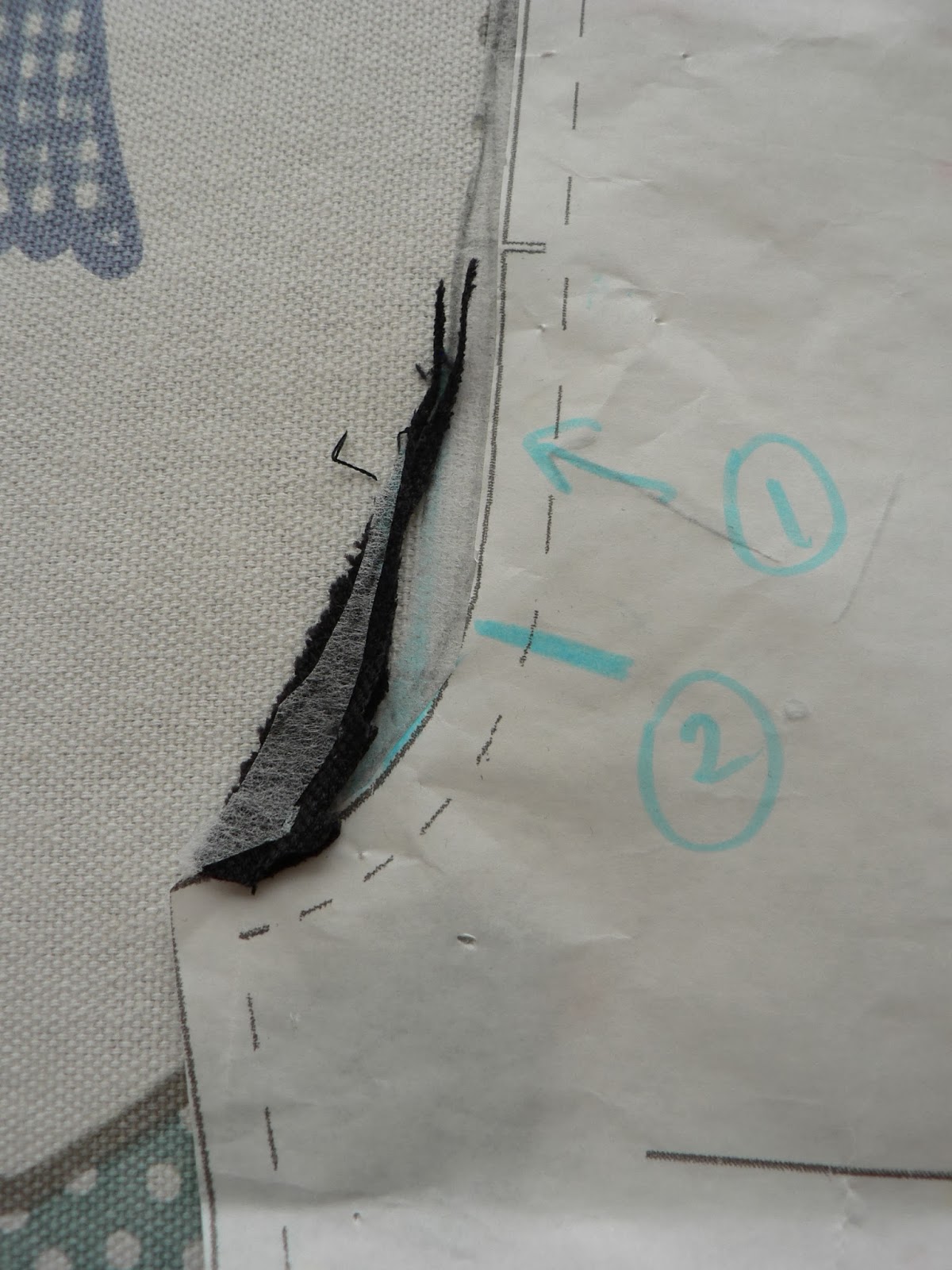 Le result? PERFECT!!!! I've worn them to work twice now, perfectly comfortable, perfectly decent to be seen in. I've got no pics because they are black pants, pretty much look exactly as my other Elle pants and all the action is in the photos above really. I'm so pleased I'll be making another 7/8 length pair up for playtime and probably another pair for home stretchy wear (our term for 'lounge wear') in a lovely ponte knit remnant I bought in the Boxing Day sales at Cleggs.

Up next is a new pair of Colette Iris shorts. I thought I'd give these one last chance. The other feature of my denim pair that I didn't love was the flaring of the lower legs - they're almost A-line and just make my bum and hips look enormous. So in addition to fiddling with the rise I decided I'd narrow the legs down and see if they were more flattering. Below you can see the rise length and shape of the Iris (RHS) compared to the Uniqlo. I just trimmed a little more off the curve of the Iris shorts, and also made them with slightly smaller side seam allowances so they were a  smidge bigger. I lengthened them by 1.5 inches too, the proper way at the lengthen line rather than just adding to the hem (I thought this might have contributed to the flaring out shape). I also chose to just do one button on the pockets and didn't bother with a button hole - they're not usable pockets as they are right in the front, so I just sewed the button right through the pocket and the shorts. 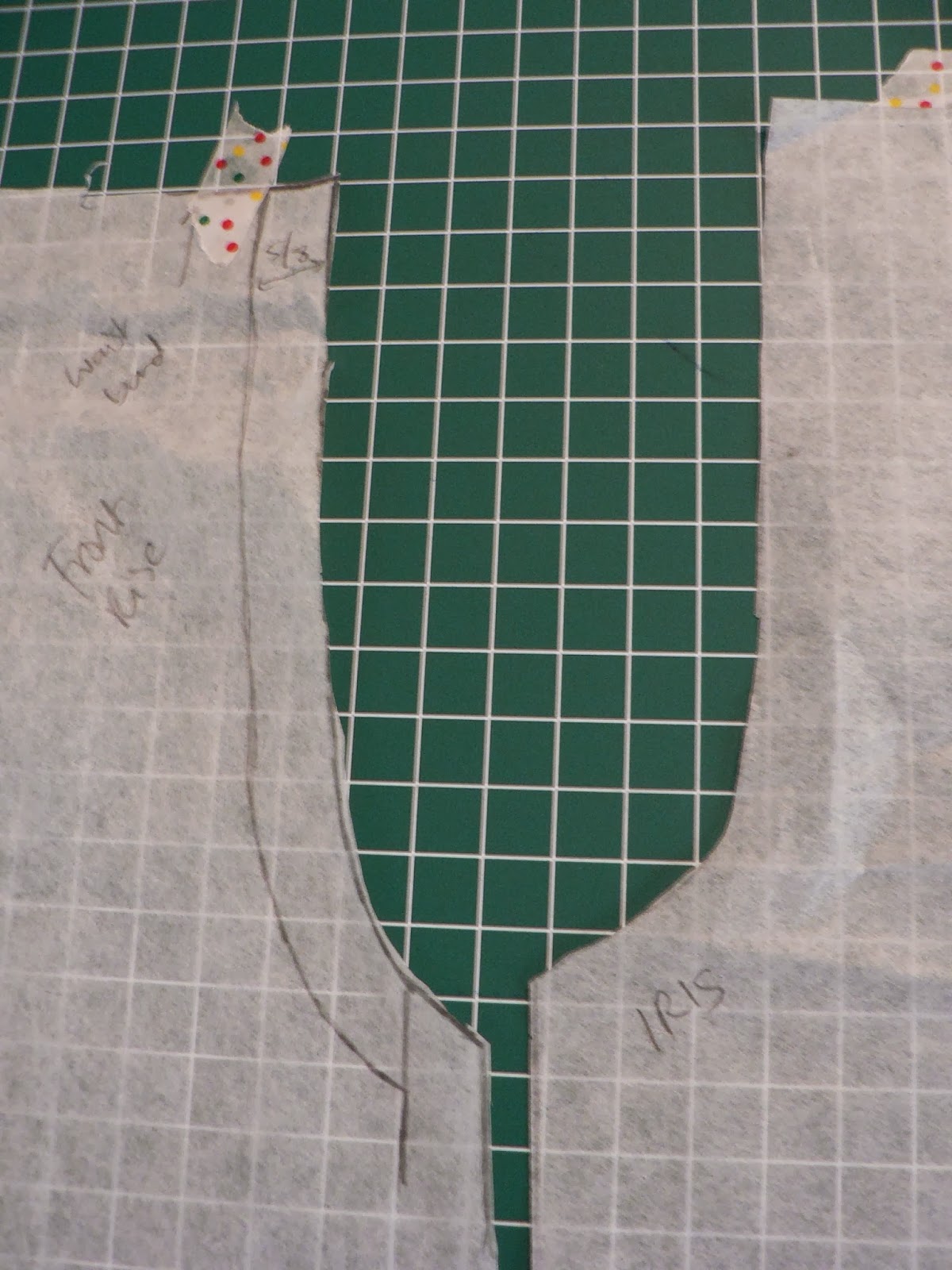 The verdict -I like the narrower leg (I took them in about 1cm at the bottom tapering up to nothing at the level of the side zip and doing the same on the other side) but the rise still isn't quite right. I think I actually need to slash the pattern and add a little more vertical length rather than just contiuing to scoop away the curve. Anyway, I'm keen to try another shorts pattern - these are getting me through our hellish heat for the moment. 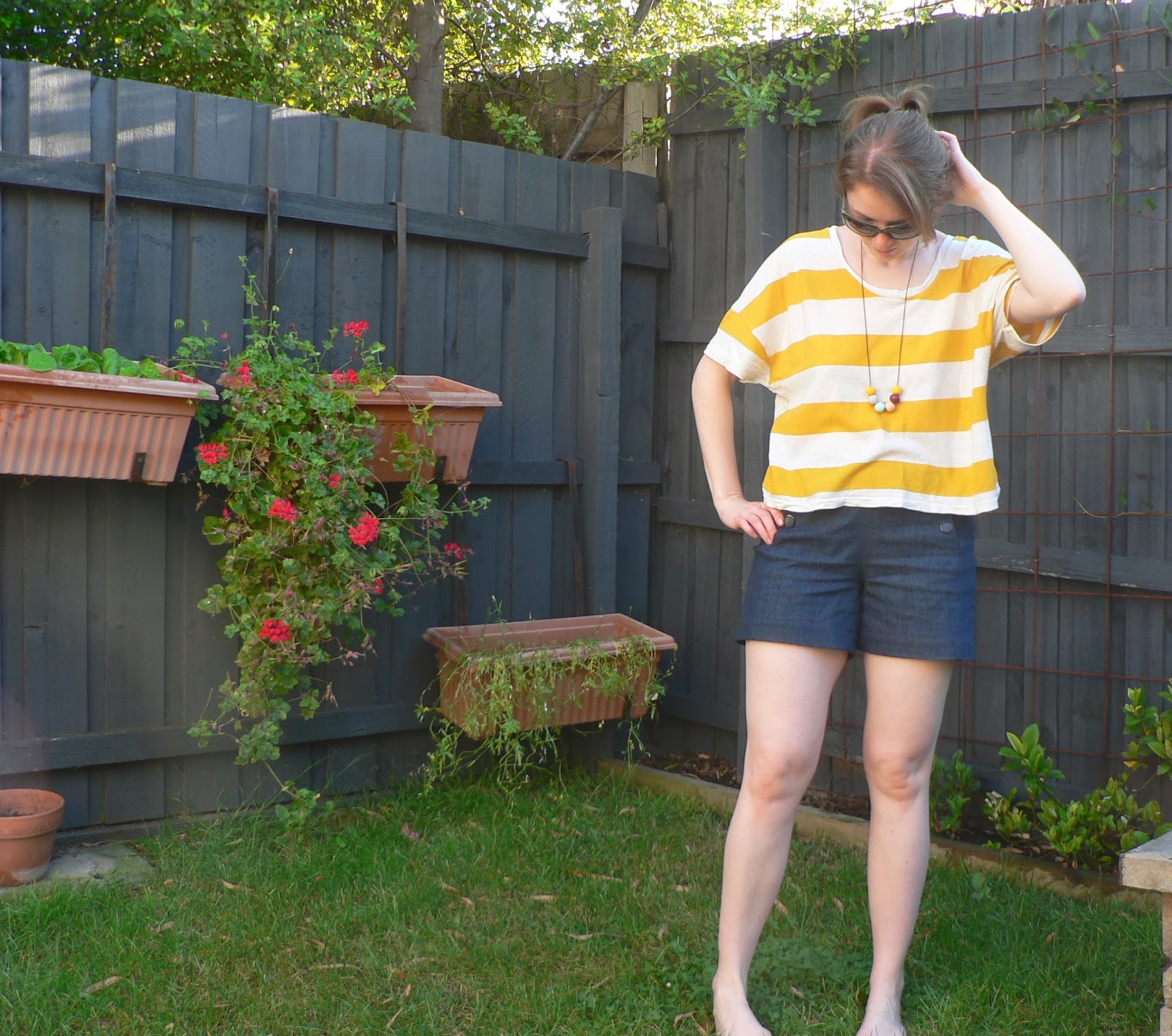 So thats all folks, for my current pants fitting update. I'll report back on fiddling with the Burda trousers (I think I'll shorten the front and back rise by about 1/2 an inch) and I'm about to have a play with an Ottobre shorts pattern to try and make something vaguely stylish and a bit cute like the Grainline Maritime shorts in the hope I'll have some perfect shorts to glamp in. In the meantime, I hope that if you are sharing this hellish heat with me you have a cooler and your family and pets are doing ok, and if you are in the northern part of the world in blizzard weather then you are warm, cozy and safe. I'm off to deal with the reality that I really have cankles at the moment, and to try to work out if the aqueous humour of my eyes is being affected by the heat or the gin and tonic I've just smashed. Adieu!
Labels: Colette Patterns Elle Pants Finished projects Fitting Style Arc Trousers