So the hot pink New Look 6000 is finished, worn and generally considered to be a success story. 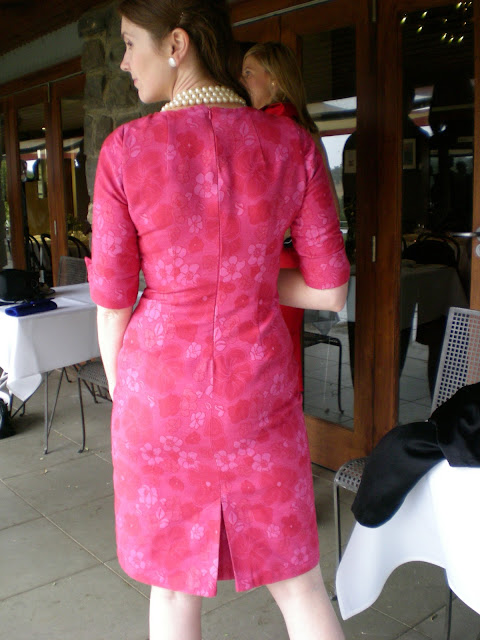 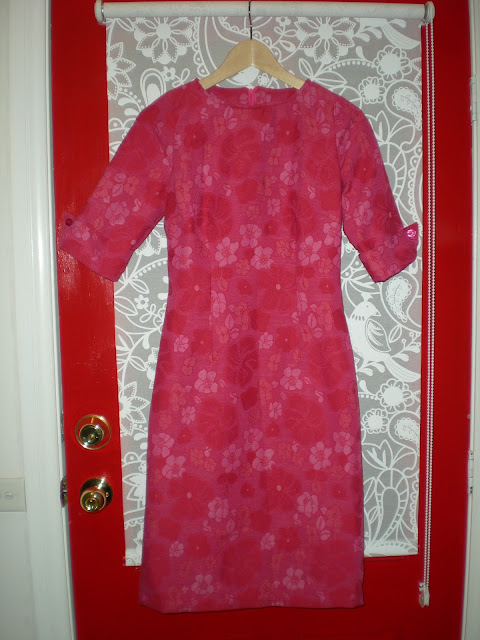 I wish I could say it was a breeze but it wasn't as easy as I was hoping, and I was very much not having fun by the end of it - a combination of the fashion fabric fraying like an SOB and having a looming deadline......

The lining was quite easy - I followed the fabulous Colette Patterns tip by using a spray starch to stiffen my super slippery silk lining before cutting and sewing - it made it nice and crunchy, almost like organza, and washed out a treat. Its hard to tell from the pics but hopefully the soft drape of the 'washed' after shot is more obvious:


I didn't do a test before I used it because I didn't have time, and I figured the lining wasn't that big a deal anyway if it was a little marked. I whipped it up in no time, french seams to stop fraying, and just did a normal split in the back - venting the lining properly was a bit beyond my skills/time frame and Connie of my awesome lining book promised me that would be just fine! I used the lining as a confirmation that my muslin changes were pretty good.

The fashion fabric was very loosely woven, from quite thick fibres, and so needed every seam to be finished, despite my planning to line the dress. My seam binding has not arrived from the States yet, so I decided I would do a clean seam finish, where the edges are turned under after the seam is sewn, and sewn again. I tried it on the shoulder seams to start with and even still had whiskery bits poking out, so made the decision to french seam the side seams. MISTAKE! I knew the fabric was probably a little bulky for frenchies, but was a bit desperate with the fraying situation (if I hadn't stay stitched the  neckline it would have just evaporated away!) but I didn't think about the extra fabric that would be used up in the 'turn' of the seams - when done twice in a french seam it used up about 2/8 inch on each side seam, which meant a total of a 1/2 inch - ease I couldn't afford to lose in this snug number. And of course this fabric does NOT cope well with seam ripping. Once I realised it was too late - I'd already trimmed the seam allowance. The only other thing I could have done, which again was too late, was to have a smaller seam allowance in the centre back. But I'd already inserted the zip (and struggled!) and wasn't doing it again. So it was pretty damn snug under my boobs again, to the point where I couldn't fully inflate my lungs. But it was wearable, and I could dance and eat in it, so that was the main thing!

The other stupid mistake I made that completely pissed me off was making the neckline facing out the fashion fabric. It was too bulky and kept popping out the top of the dress, and by the time I realised it was too late to unpick it as the neckline of the dress was slowly drifting around my house, thread by thread. Understitiching made it worse and in the end I had to top stitch it down. Amazingly the advice of my beloved and his mate worked  - 'Just wear a necklace or scarf over it - no-one will notice'!

I bound the arm seams in bias binding, to prevent fraying and attach the lining - I'm not sure if this is the right thing to do and it probably added a little too much bulk but by then (48hrs before wedding) I was so completely over it I didn't give a s**t. I had the epiphany that no-one would be looking at either my neck line or sleeve attachments (thanks to my mega tight bodice any interested eye would be diverted south). I'm never going to make something for an important event without allowing ample time. I put myself under too much pressure and by the end I wasn't having fun and was becoming sloppy with my work - not a good combo.

So after all that bitching was I happy with the dress? In the end, yes I was. I changed the vent to an inverted kick pleat to make lining it easier - and I think it gave it a gorgeous vintage touch. Its really easy to do, and made the lining split really easy too. I think every skirt or dress I make that calls for a split or vent will get this treatment especially if lined. 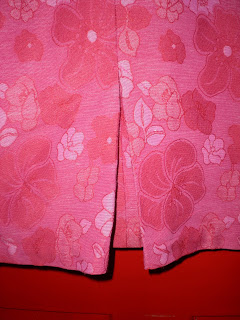 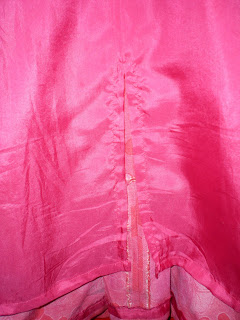 I also loved the sleeves - I finished the cuff and sleeve edges in bias binding too, because for some reason my cuffs were a little short (maybe I traced the wrong size) and so the raw edge had to be hidden (even if it wasn't going to fray like hell). I also put 2 buttons on each cuff - I think the pattern only asks for one on each but that would have meant seeing the spot where the one button was sewn. I attached them back to back. I'm assuming that if one rotated the cuff placement around 90 degrees so the edges were to the back you could just use one button on the outside edge - maybe thats they way they were meant to be and I stuffed up! I also added a couple of inches to the length and finished the hem with a piece of the silk lining cut off the selvedge to reduce bulk at the hem. 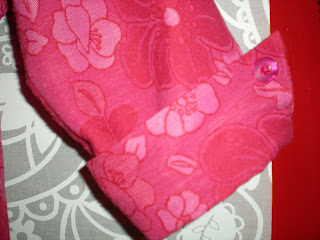 And my new gorgeous shoes - loved them! 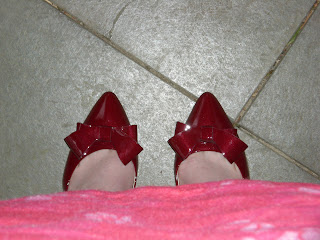 Next up - I think I need some nice detoxing knits..... no fitting, no zips, just stretchy stretchy goodness...
Labels: dresses Finished projects